Tonight, I am attending the February “We Are Most Amused” comedy night, held at the Victoria Inn, Poole Street in Northampton. I’ve been a few times now - it’s hosted and run by my friends Donna Scott and Neil Bond - and it’s a good laugh, with comedians trying out new material to a crowd who get in for free.

However, this evening’s show is a bit more special as my friend Johnny Fields is making his debut stand-up appearance (regular readers will be aware of him, though under his real name - see my comedy page for more details).

Jon & I got together the other Friday and co-wrote the script for the basic set, which he has since revised and refined. I had a great time writing it, us two sitting in my dining room trying to make each other laugh - we both turned up with plenty of notes - and it was a true collaborative experience that was very enjoyable (I just don’t write enough comedy these days).

I’m sure he’ll do a grand job, just as I’m sure the 5 minute slot will zip by in the blink of an eye and I’m really proud of my fine friend, really proud indeed. 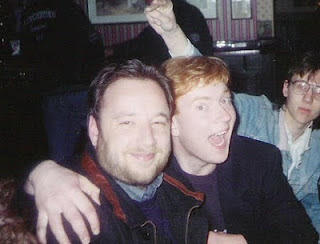 Me (on the left, with beard) & Jon, 1993. The picture was taken at The Rising Sun pub in Kettering, where The Committee and, by extension, The Fields & Wild Experience, was founded.


ADDENDUM:
The boy done good.  With snow falling steadily outside, Johnny Fields took to the stage and ran through his set and for a debut, he stormed it!  Roll on the next one.

(I do wonder what the waiters in the Indian restaurant beforehand thought though, as he ran through his set over the remains of our lovely curry, with me laughing and prompting)

And sorry for the poor quality of the pic (it's from my mobile), but here's Johnny in full flow. 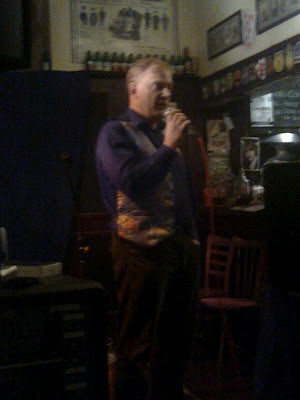