Nostalgic For My Childhood - Mr Benn at 50

David John McKee was born (on 2nd January 1935) and brought up in Tavistock, South Devon.  He studied at the Plymouth College of Art and, after he left, supported himself by painting as well as selling one-off cartoons to the national press.  His first book, Two Can Toucan, was published by Abelard-Schuman in 1964.

He was approached in 1970 by the BBC who wanted him to produce something for the Watch With Mother strand of programming.  He told The Guardian in 2017, “I showed them the first Mr Benn book I’d written and they requested 13 stories. When they asked how it would be animated, I just said: “I’ll ask somebody.” It was complete innocence.”

The animation style, in collaboration with Ian Lawless, helps add to the series charm in that it relies on simple camera moves - pans and zooms - across detailed McKee drawings, though the characters do ‘walk’ after a fashion.
Mr Benn lives at 52 Festive Road, which McKee based on his own street in Putney.  “I changed Festing Road to Festive Road, because Festing sounded too much like festering,” he told The Guardian.  The fancy-dress shop, key to Mr Benn’s adventures, was “based on a dusty junk shop in Plymouth. I went into it once, to ask about something in the window, and the owner really did appear ‘as if by magic’, as the narrator in the series says.”

The book and television versions of Mr Benn share the same format.  Always dressed the same, in a black suit and bowler hat, Mr Benn visits a fancy-dress costume shop where the fez-wearing shopkeeper suggests he try on a particular outfit (usually linked to something that happens early in the story, such as a game children are playing in the street).  Mr Benn leaves the shop through a magic door at the back of the changing room and has an adventure, tied in to whatever costume he’s wearing, before the shopkeeper reappears to lead him back to the changing room.  In a clever move, although Mr Benn has returned to his normal life, he has a small souvenir from the adventure. 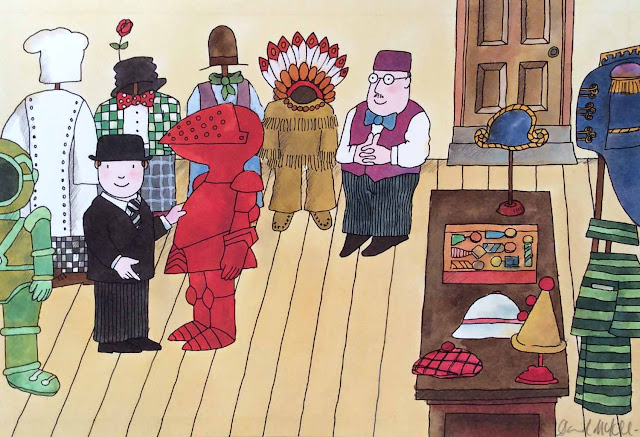 “I wanted Mr Benn to be Mr Everybody. Bowler hats were more common in the early 1970s. There was a respectability to them, plus Charlie Chaplin and Laurel and Hardy are favourites of mine,” McKee told The Guardian.  “I was heavily influenced by fables, because of their apparent simplicity. I like stories with a moral, that have a reason for being there – I don’t like a character to wake up and realise it was all a dream. That’s why I introduced the souvenir that Mr Benn always takes back with him, to say that it really did happen.”

The music for the series was composed by Duncan Lamont (using the pseudonym Don Warren) while Ray Brooks provided the narration (and for a long time, whenever I saw him act, as soon as he spoke I just saw Mr Benn).  “Grandmas come up to me and say their grandchildren are fed up with today’s cartoons,” he told The Guardian, “but they love the simplicity of Mr Benn, the fact that he’s very moral, always sorting out people’s problems – including dragons.”

Each episode, directed by Pat Kirby and made by Zephyr Films, lasted for 15 minutes.  The first six episodes, starting with The Red Knight, were broadcast on Thursday afternoons on BBC1 at 1.30pm from 25th February to 1st April 1971.  The last seven were shown on Friday afternoons on BBC1 at 1:30pm from 21 January to 31 March 1972.  The series was then repeated, twice a year, for the next twenty-one years. 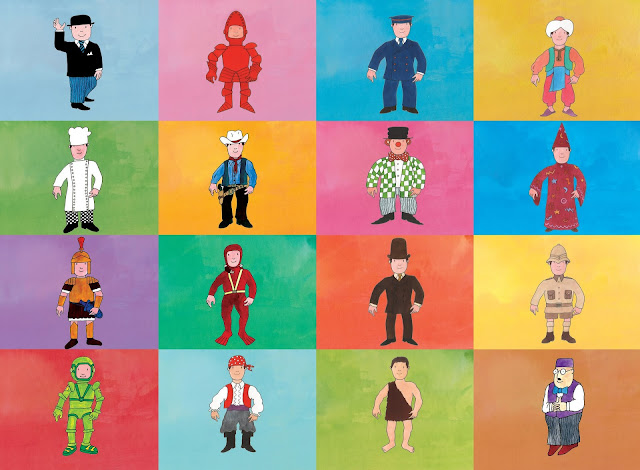 “The BBC dropped [the Watch With Mother name] later,” McKee told The Guardian, “but for me it was important: it made you conscious the audience wasn’t just children.”

David McKee went on to make films for Save The Children and wrote more books then, in 1980, co-created King Rollo.  The TV series of the same name was written by him, with narration from Ray Brooks and music by Duncan Lamont and produced by King Rollo Films, which McKee co-owned.  The company also achieved success with other series including Eric Hill's Spot the Dog, Lucy Cousins' Maisy and Tony Ross' Towser as well as the animated stories within the Fimbles programme.  McKee also wrote Not Now Bernard (which I read to Dude as a bedtime book when he was small but found it really sad) and created and wrote the Elmer The Patchwork Elephant series of books.


Happy birthday, Mr Benn and thanks for all those childhood adventures!