When I was a kid, a major ambition of mine was to make a feature film.  Regular readers will know I'm endlessly fascinated by the behind-the-scenes process on films (especially miniatures and matte paintings) and that started in my childhood, fed by watching Clapperboard and reading Look-In.  I particularly loved it when Mum & Dad let me stay up to watch Film (whatever year it was) with dear old Barry Norman.

Growing up through the 70s and 80s, video cameras were a pipe-dream and cine cameras were far more expensive than my family could afford so you can perhaps understand why this became a kind of Holy Grail for me. To try and create something visual, I ended up making various "photo-stories", which satisfied me for a while.

(for those who don't know, "photo-stories" were a staple of some boys and girls comics back in the day, replacing hand-drawn panels in a comic strip of posed stills.  Girls comics used them for problem pages, whilst I remember Eagle comic featuring a strip called Doomlord, amongst others.  There were also photo-novels - novelisations using film stills rather than prose - but the less said about them, probably the better). 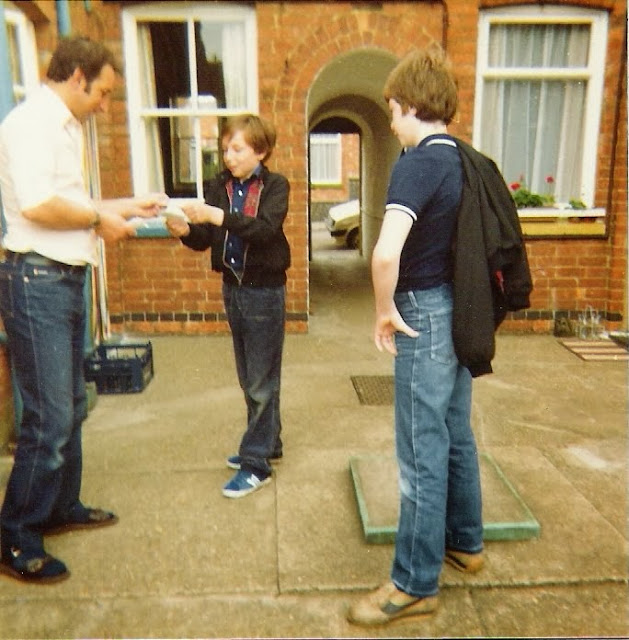 The above picture was taken in 1981 and features my Dad, me and my school friend Geoff Burbidge. We were making a story about a bounty hunter (or in effect, a very close homage to a strip called Man Tracker from The Crunch comic, which I wrote about here).  I also used this image as the cover of a novel (or, as it'd be deemed now, a long-ish short story) I wrote in 1982 called Hadley Hall Comprehensive (and which I blogged about here).
I never gained the means to make films of my own and so I never got the chance to enter the Clapperboard Young Filmmakers competition.  I did eventually make some films on VHS, with a school friend called Matt Ratcliff, but that was much later in the 80s and into the early 90s and all of them were zero-budget horror flicks.  I'll tell you about them one day.
Now, of course, everyone with a smartphone has the technology to make films but my focus has shifted to writing only (though some of my ideas do start off as me seeing them in filmic terms).  Years back, however, Dude & I made several LEGO stop-motion epics and we both had a great deal of fun with that.
I wonder how things would have turned out if I'd had the technology at my disposal then that I do now?
Posted by Mark West at 09:00:00