It is a foggy Saturday afternoon in late February 1978 (I've just turned 9) and I'm playing down the Rec with my friend Claire.  We'd been due to go and see a new film I've been raving about but the showing was sold out, so we'd come home despondant.  After a while, we hear our names being called and head out of the fog to find my Dad looking for us.  He's come to get us so we can go back into Kettering and catch the next showing of Star Wars.

We got in on that second occasion and my memories of the showing are a little hazy now but I do remember watching the Star Destroyer come over us in the opening minutes and thinking "Wow!".  I fell in love with Star Wars and cinema that day, a love I'm pleased to say is still going strong.
On 25th May 1977, Star Wars opened on 32 screens in the USA and the response was incredible.  Within the next two days, 11 screens were added as the film broke box-office and attendance records left, right and centre.  The film was a huge success and cinema owners couldn't wait to get their hands on prints, so much so that 20th Century Fox, the distributor, was cranking out extra prints evens as they sped up plans for a broader, nationwide release of the film.  It had made $3m by the end of its first week and over $100m by the end of summer.
Back then, it wasn't unusual for a film to open in the US and then have several months elapse until it reached us and such was the case with Star Wars.  It opened in London (at two cinemas, the Odeon on Leicester Square and the Dominion in Tottenham Court Road) on 27th December 1977, with the nationwide release starting on 29th January 1978.  In London, it made £117.7k in its first week, comfortably beating the previous record, held by Jaws, of £90.6k.  I already knew a lot about the film because the TV news and entertainment shows had been covering it for months and kids like me (and plenty of adults too, I'd imagine) were chomping at the bit to see it. 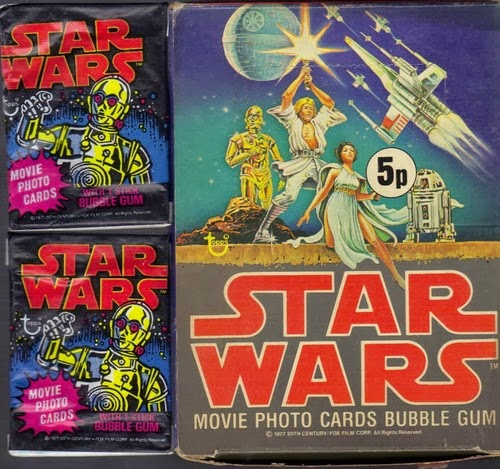 I began collecting the Topps trading cards during the summer (each wax packet contained seven cards - and a sticker, apparently, though I don't remember those - along with the strip of bubble-gum that quickly lost its taste), amazed and excited by images that I sometimes couldn't even properly work out.  What the hell was a Wookiee?  What were droids and how did they communicate?  What was Darth Vader, what did he sound like, why did he have the Stormtroopers with him? 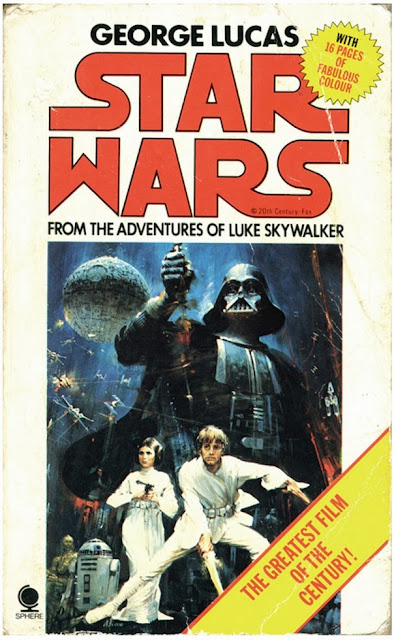 I convinced my Dad that even though I was eight I was more than up to the challenge of reading the novelisation 'by George Lucas' (actually, Alan Dean Foster wrote it).  Dad believed me, bought the book and I did read it, my imagination running wild - I doubt I understood a lot of it and I certainly didn't envisage it in my head as it played out for me much later on the cinema screen, but I do remember enjoying it. 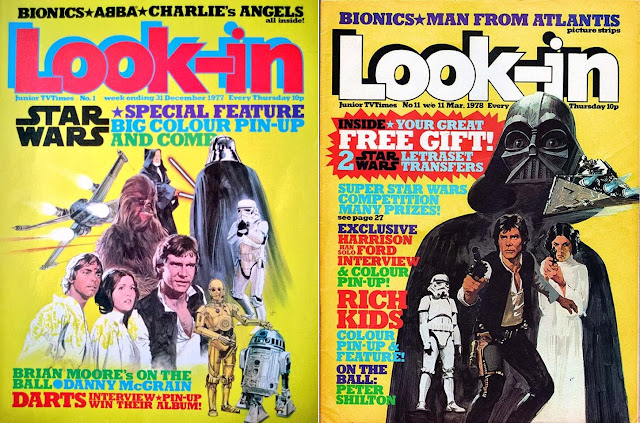 I was an avid reader of Look-In magazine and they put Star Wars on the cover for their last issue of 1977, having mentioned it several times beforehand.  In the issue published w/e 11th March 1978, Star Wars had the cover again (with a free gift of 2 Letraset transfer sets) and Harrison Ford was interviewed.  In February 1978, Marvel Comics launched Star Wars weekly (the US had seen it in 1977), with C-3PO appearing in TV ads to promote it (priced 10p and including a free cardboard X-Wing fighter!).  Marvel also published the Official Collectors Edition (apparently only in the UK) which tied Star Wars in with Hollywood's past, had some decent behind-the-scenes material and also recapped the story.  Lavishly illustrated, I thought it was a great publication (and still have my copy in my collection). 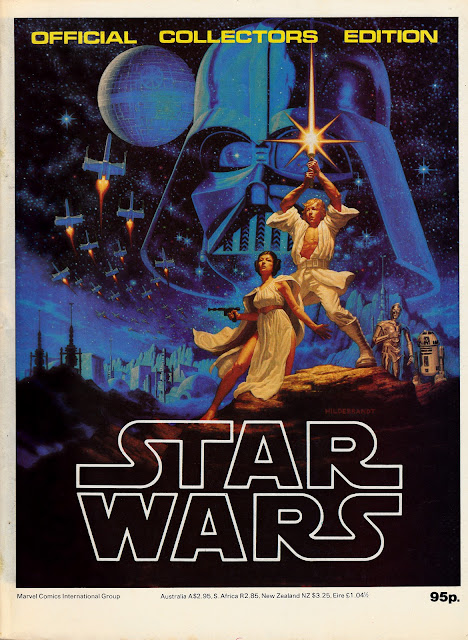 I think it's impossible, in this age of social media and on-line spoilers, to over-state just how big a deal Star Wars was back then - because it really was.  Unlike today, nothing was available (apart from the novelisation) before it opened - even the toys, which everyone remembers, weren't released until a year later - and I spent 1978 enjoying those spoils.
To help Star Wars celebrate its 40th anniversary, the blog will run a year-long thread "Star Wars At 40", with each post appearing on the first Monday of the month.  There will be articles/essays on the Marvel comics, Stormtroopers (of course), the production design, ILM, the toys and much more, along with other pop-up posts.  I'm looking forward to it and I hope you'll enjoy it too.