Last year I was part of the inaugural Hersham Horror Books Primal Novella range, along with my friends Stephen Bacon, James Everington and Phil Sloman.  Peter Mark May did a great job, bringing together four very different but equally good pieces of work and I'm proud to be part of the group.
Here, then, are my reviews of the novellas (not my own, of course, I've included reviews by others for that) and if you click on the title, that will take you to the Amazon page for the Kindle edition.

Four novellas, all well worthy of your time. 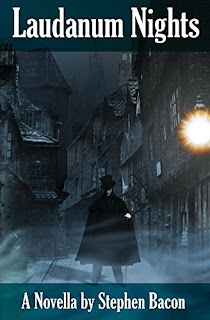 A crime/dark fantasy cross-over, set in a pseudo-Victorian city, this involves kidnapped children, sentient dolls and a mysterious fiend who never ages.  Leonard Miller is a lecturer at St Timothy’s university, who lives on Serpentine Street, part of a squalid area of Blackford known as The Abyss.  When a young child, Martha Glass, goes missing, he is initially questioned since he did private tutoring for the child.  The police then discover that he left his last university under a cloud, something (unrevealed) to do with yet more private tutoring.  Determined to find Martha - not to clear his name, but because he visits her family and sees the devastation her disappearance has caused - he sets out to investigate and quickly makes connections that lead to death in a toyshop, a mad woman in a pub and an old Gothic mansion in the marshes.  I thoroughly enjoyed this, it had great pace and a strong sense of location and atmosphere - you could almost smell the gas lamps and taste the fog.  Leonard is a sympathetic character - though we’re not entirely sure of his backstory or his relationship with the mysterious Raul who sets his investigaton on the right path - and well portrayed, brave, resourceful and, above all, determined.  The other characters are vividly sketched and there’s a nice twist about who the key villain is.  Assured, technically smart and deftly written, this is an excellent novella that I would highly recommend. 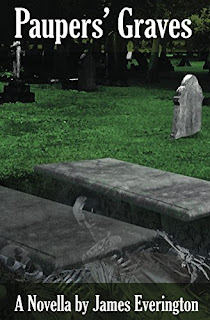 In a Nottingham cemetery, hidden from the grandiose tombs of the city’s rich in a depression known as Saint Ann’s Vallley, are the old pauper’s graves.  Katherine and her team, interns Alex and Katya (who are secretly lovers), have been ordered to create an exhibit based on the lives of those unfortunates buried beneath.  But the paupers represent part of the city’s history Katherine tries to avoid, as well as part of her own and when she alters some of the histories, the dead become enraged.  Solidly told and multi-layered, this weaves between the present - the highly-strung Katherine, rich-boy Alex and poor immigrant Katya - and the past - the long-dead citizens of the city they are researching, Joseph Hewitt, Patricia Congden and Stanley Burton - effortlessly, painting the time period with rich detail that brings it to life vividly.  Equally at home in the Victorian slums as he is in the dingier areas of modern-day Nottingham, Everington builds the story patiently, comparing the cheapness of life back then with some of the extremes that austerity is creating today.  As the story rushes towards its downbeat climax, it’s as disorientating as a nightmare, a tone and atmosphere the writer sustains well.  Gripping, intelligent and bleak, this is well worth a read and I’d highly recommend it. 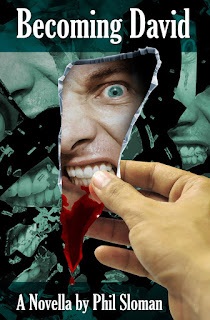 Richard Lodge lives a very ordered life, in the house that had been his mothers.  He has a cleaner come in twice a week, prides himself on his minimalist existence and enjoys a good career as a freelance accountant.  He also kills people.  The story opens with a wonderfully shocking chapter, where Richard kills the latest man he’s lured back to the house, listening to the life ebb away with a detached air.  As normality returns, the details of his life - working for clients, complaining that his cleaner is singing too loudly, working in the wet room in the cellar where he butchers his victims - begin to come through.  Sloman has a good grasp on Richard’s character, where nothing phases him until one of his victims, the David of the title, proves just that little bit harder to get rid of.  The book has a claustrophobic feel - most of the early scenes take place in either London pubs crammed with eligible gay men or the cellar gym/disposals area of 17 Beechwood Avenue - that combines with the oppressive nature of Richard to give the narrative a tense, skewed sense of place.  When it does open up, with more characters and locations, it actually becomes more oppressive as things go from bad to worse.  The book doesn’t shy away from violence though most of it is tinged with a nice sense of black comedy - arterial blood hits a dinner place “decorating the remains of their evening meal with a human jus” and it’s easier to hide a body once you’ve broken its shins with a tyre jack - and I liked that.  Well written, with a good pace, this is a horror novella I would very much recommend.

The Factory, by Mark West 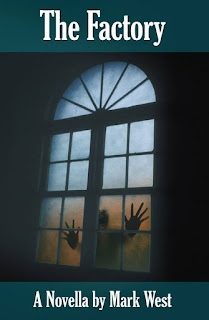 Twenty years ago at college, Martin, Paul, Jane, and Gwen were members of the GLUE Club - the Gaffney Legendary Urban Explorers - run by the charismatic Tom. Now, following his mysterious death, they agree to meet up again and undertake one final exploration to honour his name.

Aside from Paul who never left, none of them have been back to Gaffney since and the reunion is awkward, re-opening old wounds. As they begin to explore the long-abandoned Pocock Factory, it seems they might be intruding on something better left alone. As they succumb to the spirits in the darkness, it quickly becomes a battle to see who will survive the night...


The novellas were launched at FantasyCon-by-the-sea in Scarborough on Saturday 24th September, along with Marie O'Regan's collection.  It was a great launch (I wrote about it here), including a packed room, lots of sales and plenty of friendly faces and smiles - if only every launch could be as much fun!
If you decide to take a chance on any of the books, I hope you enjoy them as much as I did.