Continuing a tradition (now in its third year), here's my annual look back at 2015 from a creative standpoint.

During the year I wrote 5 short stories, 1 novella, 1 novelette (only in first draft at the moment), a couple of novella pitches, a load of book reviews and a host of essays/articles for this blog (which topped 600 posts in the year!). 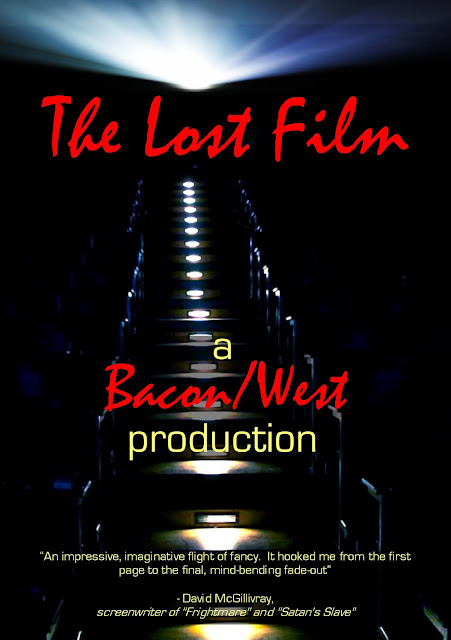 My novella The Lost Film - as part of "The Lost Film novellas", alongside "Lantern Rock" by Stephen Bacon - finally saw the light of day from Pendragon Press.  Launched at FantasyCon (an event that went really well, I'm pleased to say), the book is available as a limited edition paperback and the ebook will be released shortly.

My novella Drive, published last year, was nominated for a British Fantasy Society Award, which I was really chuffed about.  The Awards are presented at FantasyCon and the shortlist for Novella was a strong one (I was alongside Carole Johnstone, Ray Cluley and Stephen Volk - we're all friends and it was a very supportive list), with Stephen taking the honours.  Hey, if you're going to lose, you might as well do it to Steve Volk!

My Spectral Press chapbook, What Gets Left Behind, was released as an ebook via PenMan Press in April.

* * *
During the year I also curated the "King For A Year" project (which I wrote about in depth here) which featured 56 writers and fans reviewing 64 individual works by Stephen King.  I had a lot of fun doing it and the feedback has been excellent.

* * *
"The Lost Film" picked up an honorable mention from Anthony Watson at the Dark Musings 2015 review:  "I loved them both and think it’s one of the best things Mark in particular has written. His protagonists are often decent, honest and downright nice people so it was nice to see him have a “hero” who wasn’t quite as pure – and the concept underlying the story was brilliant."


In addition, The Crusty Exterior met up in London on 11th April for the first time (find the report here) and we had such a great time, there's a meet planned in Brum early next year.  I also did a reading and Q&A session at the inaugural KettFest Event on 5th June (which I wrote about here).
* * *
Creatively speaking, 2015 has been a pretty good year all in all.  Of the five short stories I wrote, four were asked for and subsequently accepted by the editors in question - the remaining one is still looking for a home.  The novella was also asked for and I accepted it for the challenge (I'd never written a wartime-set story before) but I liked the editor and publisher and had a good time with it. I'm excited about the novelette (which is still in draft) - I was approached by a publisher I liked who wanted to produce a paperback and audio-book version of a story.  It will be narrated by Carrie Buchanan, who I finally met at FCon and we got on like a house on fire - I've tailored the tale to her, set it in Paris and had a great time working on it.

I'm feeling optimistic for 2016 too, not least because I have seven stories scheduled to be published (including my first audio), but also because I've been asked to write two short stories (for different publishers) and a novella (for Hersham Horror Books) and I'm planning a new novel as well.  It's all go!

Thanks for all your support in 2015, dear readers of this blog, especially those who bought, read and liked my work - I really do appreciate it.
Posted by Mark West at 09:00:00