I'm pleased to announce that "Demonology", the new anthology edited by Dean M. Drinkel, has just been published by Lycopolis Press.  This is the fourth time I've worked with Dean (as the book contains my story "The Penthouse Incident") and this features a welcome (for me) return for my character Mike Decker, who originally appeared in "The Zabriskie Grimoire" (which I blogged about here).  In additional news, I'm going to be writing another Decker story for Dean in the near future. 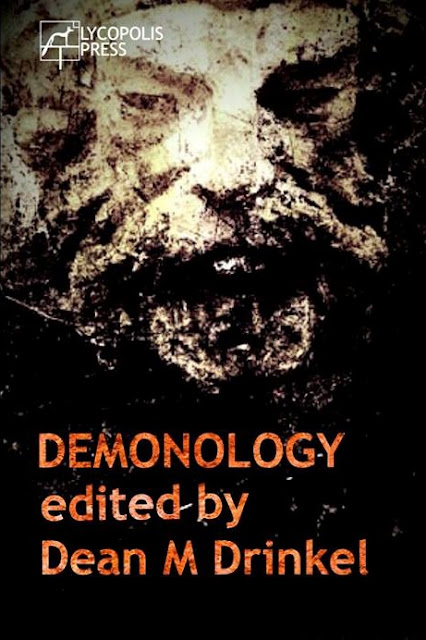 The Throne
Peter Mark May

From Within
Christopher L. Beck

The book is available (in print editions only at the moment) from the following:


This time around, Decker describes himself thus:

"I am an acquirer, a finder of items lost or hidden and although it’s an occasionally dirty job, I am well paid for it.  I take my job very seriously and I expect other people to do the same.  I once had a meeting with an arrogant playboy who compared me to a personal shopper and it took him almost five minutes to properly take a breath after I’d punched him in the throat."

Mike is hired by Brian Bootle, "one of Gaffney’s pre-eminent pornographers", to find his son Daniel, who has stolen a grimoire from Brian's private collection.  The trail leads Decker to a penthouse suite where, it appears, all hell has broken loose.  I had a lot of fun with this story, making my anti-hero as horrible as possible whilst also poking fun at what sometimes passes as celebrity these days.

I could smell blood in the air as soon as the lift door opened and since it wasn’t a scent you normally associated with one of the finest hotels in the city, it wouldn’t be long until someone complained.
I stepped out of the lift onto the top floor, occupied by four penthouses.  The corridor in front of me, which serviced all of them, ran the width of the building.  It was wide and thickly carpeted, decorated in such a way as to draw attention to itself without seeming unbecoming.

If my contact was correct, my target was in 6b and the door closest to me, on my left, was 6a.  I walked down the corridor, my footsteps completely muffled.  It was so quiet I could hear myself breathing, along with the faint hum of air conditioning and the gearings of the lift.  I stopped outside 6b.  The door looked exactly the same as the others, there was no pentragram scrawled in blood on one of the ornate inlay panels, no claw marks around the handle, nothing to tip me off that I was in the right place.

Leaning forward, I put my ear close enough to hear anything that might be happening in the room.  Nothing.  I touched the door-handle with my fingertips and it felt vaguely warm.

I knocked and it sounded very loud.  “Room service,” I said, in the cheeriest voice I could muster.  There was a noise but I couldn’t make out what it was.

I looked back along the length of the empty corridor.  The lift had closed.

I opened the door and pushed it as far as it would go.  The smell of blood was overwhelming and I could almost taste it, it was so thick in the air.  Nobody rushed me so I stepped over the threshold into a small hallway that opened up into a minimalist, modern  suite.
Posted by Mark West at 09:00:00