"Beware The Moon, Lads..." - An American Werewolf under the stars

Regular readers of this blog (there must be one or two of you) might remember that back in early May (and if you need reminding, I blogged about it here), my friend David & I went to see “Close Encounters Of The Third Kind”, the first film in an open-air programme run by Luna Flix at Stanwick Lakes.  It was great fun and we both thoroughly enjoyed the evening so when we saw that “An American Werewolf In London” was showing, we were dead set on it - even better, it was scheduled for July 31st, to be shown under a blue moon.  Oh yes!
David arrived at Stanwick Lakes first and secured us a couple of decent spots, middle row centre.  Luna Flix use a terraced area to the side of the Lake as their theatre and whilst for “Close Encounters” there were probably fifty or so people there, this time well over a hundred were expected - the show was sold out and the place was packed. 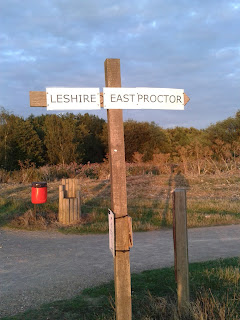 I got there for about 8.20 and as I walked around with other film-goers, I saw that the road sign had been ‘adapted’ for the evening, which made me smile.  Walking across the grass (and I couldn't help but hear Brian Glover advise me to “keep off the moors!"), I heard a steady stream of moon-related songs blasting out of the theatre.  At the ticket desk, the two ladies in charge were wearing make-up to simulate scratch wounds and looked great and there was a real sense of atmosphere with the people in the queue.  When I got into the theatre itself, I was genuinely surprised to see so many people there - the horror film, it appears, is as popular as ever.  I said hello to Simon Hopkins, the Luna Flix head honcho (we don’t know each other but have chatted on FB and he seemed to remember me from last time), found David and we caught up on things.  At one point, the music was switched off and everyone was encouraged to yell “you made me miss!” at whoever had just walked in.  That helped build the atmosphere, especially when the newcomers reacted - I went to the loo and when I came back, one lone bloke at the back shouted it at me.  I waved at him. 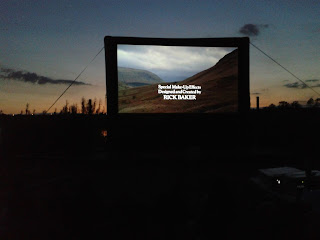 The film wasn’t scheduled to start until 9.40, when it was dark enough and as David & I chatted and made ourselves comfortable and wrapped up warm (we learned our lesson last time), people were still coming in (“you made me miss!”) and looking around in a panic, trying to find somewhere to sit.  After a brief introduction, we got a ‘surprise’ bonus film and it was a lovely touch that got people into the spirit nicely.  Then, in Blu-Ray splendour, we moved onto the main feature.

"An American Werewolf In London" is one of my all-time favourite films, for a whole load of reasons and it never fails to disappoint.  The camaraderie between David & Jack is spot on, Jenny Agutter is beautiful, it's very funny ("a naked American man stole my balloons..."), it's very gruesome (I still find the home invasion dream sequence - and subsequent stabbing - shocking), it has the whole 'Moondance' sequence, Rick Baker thoroughly deserved his Oscar and it's tightly written (with a wonderful English sensibility to it).

Like most people my age, my first exposure to the film was on a fairly dark and cloudy VHS (it wasn’t until I first saw it on DVD that I realised the naked bloke on the moor at the start was the original werewolf and not Griffin Dunne’s Jack) and seeing it, on the big screen and in HD, was a real treat.  The image was a little grainy and maybe some of the make-up edges showed but it was glorious and the sound was explosively loud (I hadn’t realised before how ‘jumpy’ the soundtrack was).  The film is 35 years old next year (I’m already planning my ‘retrospective’ article and wrote about Rick Baker earlier this year) and it held up superbly, easily keeping the large audiences attention completely.  Personally, I loved it (and yes, the ‘Moondance’ sequence looked particularly splendid) and spent the whole time with a big grin on my face.
It was a fantastic experience (Rick Baker's transformation is still, all this time later, simply staggering and John Landis' direction moves at a hell of a pace) and the film got a round of applause as the credits rolled.  As David & I walked back to the car park (“keep off the moors lads!”), he admitted he wasn’t sure if he’d seen the whole film before but had loved it and we reminisced about how nostalgic it was, looking at an England from 1980/81 that we both clearly remembered - the cars, the clothes, three TV channels, the nurses uniforms, the shops that don’t exist any more and a Picadilly Circus that was a lot seedier than it is now (but, perhaps, just that little bit better).

“An American Werewolf In London”, under the stars and a full moon, was a real treat and I really enjoyed myself.  I’m not sure what we’re going watch in the programme next, but I can’t wait to go!

If you’re local, check out the schedule here and pop along, it’s great fun.


and here, for your viewing pleasure, is the masterful transformation sequence in all its glory...