I'm happy to see that "Darkest Minds", the third anthology (following "Dark Minds" and "Darker Minds" - the latter of which featured my short "Looking At Me, Seeing You") edited by Anthony Watson & Ross Warren has just been published by Dark Minds Press.  The anthology contains my story "Time Waits..." and I also contributed the cover art (co-designing it with Anthony). 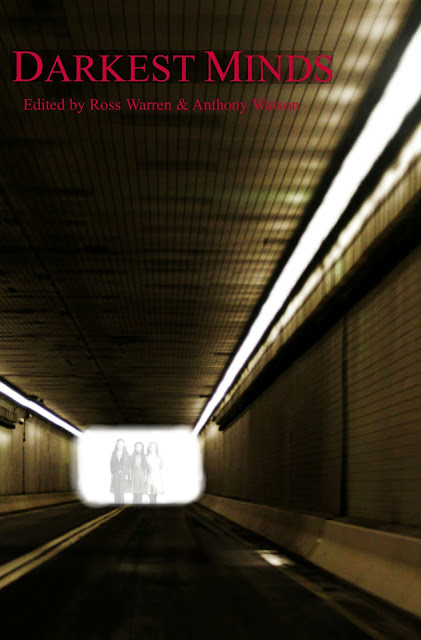 IT CAME FROM THE GROUND
Stephen Bacon

"Time Waits..." is about Martyn, a man who becomes obsessed with time and the need to shave minutes off his daily commute.  Dark - though with a hint of hope, courtesy of Martyn's wife Ellen - and quite odd, this was good fun to write and I put it through the critiquing process at my writing group (who seemed to like it).  I'm pleased that it found a home in the anthology and chuffed to be sharing space with some great writers.

If you're intrigued, here's a little snippet of my tale...

"What the hell is going on?” he said.  The CD player made another strange noise and the disc ejected itself, dropping onto the gearstick before sliding into the passenger footwell.  Martyn followed its progress, then looked back at the road and saw the man on the bike.

His heart jumped violently and he yanked the car heavily to the right to avoid the cyclist with his bright yellow jersey, white helmet and red trousers.  The man must have been there for ages and Martyn had just not seen him but no, that wasn’t right, his view had been unimpeded, he’d have seen the bright colours if nothing else.

As he passed, Martyn looked at the cyclist and felt a sudden cold pull in his chest.  The cyclist had no face, just a flesh coloured blank with dark smudges where eyes, nose and mouth should have been.
Posted by Mark West at 09:00:00