This is the first post in a new thread I'm going to follow on the blog.  For a few years now, I've been collecting old 70s and 80s paperbacks (mostly horror), picking them up cheaply in secondhand bookshops and at car boot sales and slowly building a collection.  My friend (and fellow collector) Johnny Mains once told me that charity shops sometimes pulp old books like this because the market for them is so small - I understand why but I think it's terrible.  Yes, we're not talking great art here but these books have their place - for better or worse - in the genre and I think they deserve to be remembered.

To that end, on an irregular basis (too much cheese isn't good for anyone's diet), I'm going to review these "old-school" horrors (and perhaps include some bonus material, if I can find it).  And here's the first...

Until the invasion struck.

An invasion of thousands of tarantulas - mutations of a sinister, terrifying kind, beings with the intelligence and cunning of men. And appetites for food. Living, human food...

When will the invisible world of crawling creatures strike back at man? Will the day come when we find ourselves captives in the -

Camp Verde, Arizona, is the archetype of small-town Americana.  From big Earl Forbes who runs the gas station (he comes complete with chewing tobacco and I’ll bet he wears an armless lumberjack shirt) to Sheriff Gene Smith (friendly, efficient but occasionally willing to look the other way), from Emma Washburn who runs the guest house (she was in her 40s, but kept herself well - which was good to hear, from this mid-forty-something reader) to Robert ‘Rack’ Hansen, the town vet (and the hero of the tale).  When local farmer Walter Colby sees one of his prize cows collapse, he calls in Rack, worried that there might be a disease - which also worries Mayor Connors, who is concerned there’s no hitch to the upcoming County Fair (shades of Jaws).  Rack takes some samples, sends them to the local university for checks and is then visited by Diane Ashley, a ‘recognised scientist’ from the Arizona State University department of entomology.  Her tests have revealed that the cow died from an enormous amount of spider venom and when Colby mentions finding a spider hill on his farm, their worst suspicions are confirmed.  The spiders - which shouldn’t even be found in the state - are massing (going against their natural impulse, since they’re cannibals, apparently) and that can only spell trouble for the inhabitants of Camp Verde.

Originally published in 1977 (and copyright to Arachnid Productions Ltd), this is the novelisation of a pulp-exploitation film starring William Shatner (and once you know that, it’s impossible to hear Rack in any other voice), which I haven’t seen though I now really want to, as I imagine the novel follows the screenplay quite closely.  Briskly paced, the writing is basic but does the job, though it would have been nice to include the occasional flourish.  Hurwood misses several opportunities to wring suspense out of a scene, especially the several “spider almost got them” ones which would work well on screen, rushing them off at the end of paragraphs.  The worst example of this is the plane crash - it’s big enough that it features in the film trailer - which is over in the book almost before it’s begun.  Characterisation is equally basic - the supporting characters are mainly spider meat though the Mayor has some prize moments with his County Fair woes - but Rack (he does explain where he got the nickname from) and Diane are capable and sketched in enough that you do hope they get through things alive.

With some smart set pieces, a nice subplot that all of this might have come about because of excessive use of DDT, a good sense of location and a brilliantly downbeat ending, this was an enjoyable read.  It’s not for everyone but if you like pulp that’s good fun, that is brisk and efficiently told, you could do a lot worse and I recommend it - though your mileage may vary. 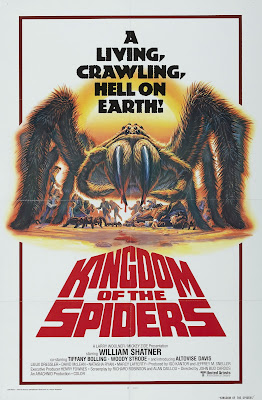 Kingdom Of The Spiders (1977) was directed by John “Bud” Cardos, produced by Igo Kantor, Jeffrey M. Sneller and James Bond Johnson, whilst the screenplay was by Richard Robinson and Alan Caillou, from an original story by Jeffrey M. Sneller and Stephen Lodge.  The film, which cost $1m, was released by Dimension Films (not the one that came out of Miramax) and starred William Shatner as Rack, Tiffany Bolling as Diane, Woody Strode as Walter Colby and Altovise Davis as his wife Birch.

Producer Kantor told Fangoria magazine in 1998 that the film used as many as 5,000 live tarantulas, though a number of rubber models were also used.  Since they are cannibalistic in real-life, all of them had to be kept in separate containers, which made storage an issue.  Tarantulas are ‘shy’ around people so when it came time for them to attack, they had to be nudged with fans or air tubes to approach their victims and - whilst I’m not sure I’d want to test this out - the venom of most is not dangerous to humans, being no more harmful than a bee sting (unless the person is allergic to the venom).

At the time there were concerns over animal cruelty, with many of the arachnid stars perishing during production (especially in a sequence where the characters are called upon to stamp them to death).  Indeed, several get run over in the film trailer.

The film is 97 minutes long and recorded a total box-office take of £17m.


Bernhardt J Hurwood was a New York born writer (July 22nd 1926 - September 5th 1987) who apparently had a wide literary career, in various genres and in both fiction and non-fiction.  As Mallory T Knight he wrote the first nine books in the "Man From T.O.M.C.A.T." series (which sounds great) from 1967 - 1969, at least six novels and novelisations (including "My Savage Muse: The Story of My Life by Edgar Allan Poe, An Imaginative Work"), at least eighteen anthologies (mostly horror) and a raft of non-fiction (mostly of an erotic nature - including 1975's "Joys Of Oral Love") that even encompassed a biography of Burt Reynolds and a behind-the-scenes book on the film "Meteor".  He also wrote one of the earliest manuals on adjusting to the computer age, with "Writing Becomes Electronic: Successful Authors Tell How They Write in the Age of the Computer" in 1986.