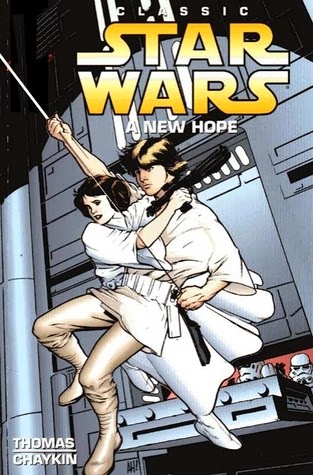 One of my earliest encounters with comics (aside from the weekly adventures of Spider Man) was the Marvel comics adaptation of “Star Wars”, which appeared in the 1978 annual.  It sticks in my mind because, as a big fan of the film, my parents got me it to read in the car as we drove down to a family holiday in Widmouth Bay.  In addition to behind-the-scenes stuff and interviews with the actors, it also ran an abridged version (none of the trash compactor makes it in, for instance) of the comic.

Having watched the original trilogy films over the Christmas period with Dude, I decided a re-read (after several years away) would be in order.  Rather than the annual (I didn't want to miss out sections), I went for the Boxtree version, collected from the weekly comics, which was written by Roy Thomas and drawn by Howard Chaykin and Steve Leialoha.

Clearly sourced from an earlier screenplay (Luke is part of Blue Squadron, for instance and Jabba The Hutt resembles something that stood at the bar in the cantina), this follows the film but also includes scenes that were never shown, such as Luke and his friends at Tosche Station, Luke seeing the battle at the beginning and pretty much all of Biggs’ part. 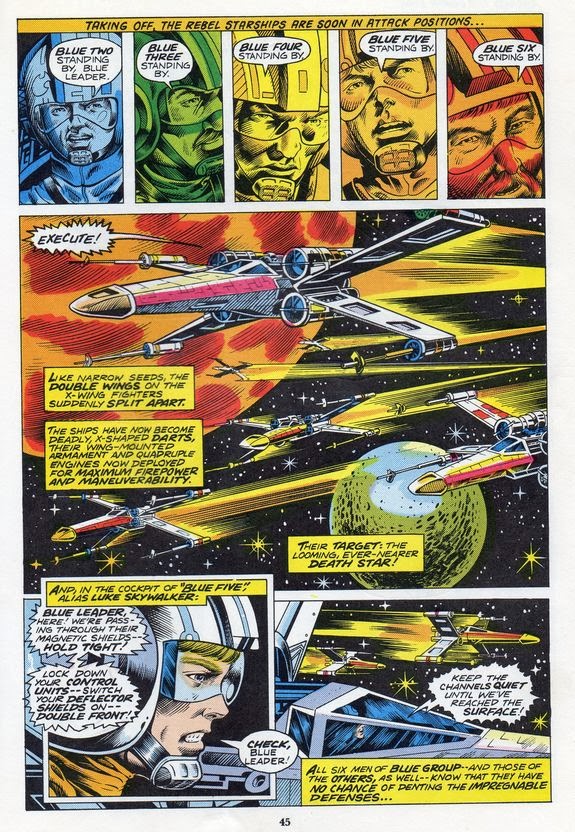 As a light read (the editing works well, though some of the “meanwhile…” boxes do get monotonous), it’s generally good fun.  The Chaykin artwork is more visceral and immediate (he’s not very good at drawing spaceships) but the Leialoha section, which starts at the encounter with the Tusken Raiders, is more detailed and defined (and, to my eye, better).  The book also has several pages of production art from the film.
With some peculiar dialogue choices - I can’t imagine Han Solo saying “hold on tight kiddies” as the Millennium Falcon blasts away from the Death Star - and some pruning - only the X-Wings make the run on the Death Star - this is faithful enough and conveys the immediacy and action of the film.  Speaking as someone who doesn’t tend to read graphic novels, but loves “Star Wars”, I really enjoyed it and would highly recommend it.

Ever the completist, I also found and read the Boxtree editions of "Empire" and "Jedi" but didn't enjoy either of them as much as this (nor was the artwork as good).
Posted by Mark West at 09:00:00