I finished two good books this week (which I can talk about, there's also a novel that I critiqued for my friend Sue Moorcroft, which I can't talk about yet), so I thought I'd let you know about them.

The first was "Fortunately, The Milk", by Neil Gaiman - it's designated as a children's book and I read it with Dude over a couple of nights but it works a treat for adults too. 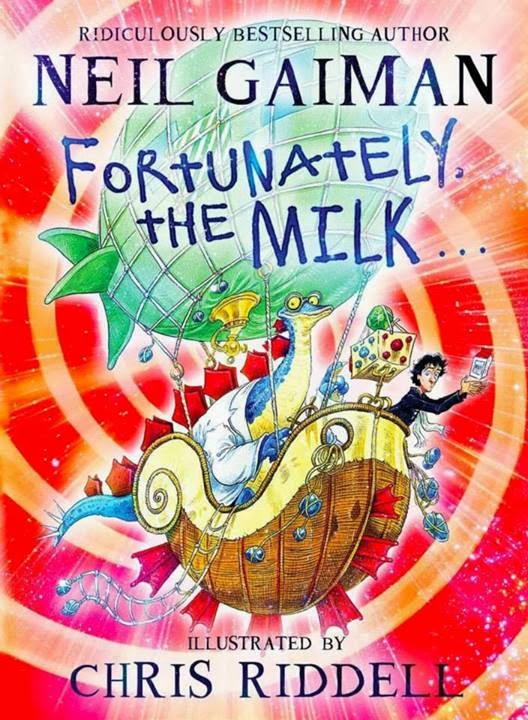 Dad (looking remarkably like Gaiman himself) is left to look after the house and kids when Mum goes to a business conference, though he’s given a long list of things to do.  His priority is not to forget the milk - which he does - and so the next morning he has to go and get some from the corner shop.  The story is his explanation, to the kids, about why it took him so long.

I had a lot of fun with this book, which I read to Dude (who’s 8) over two nights and his response, when we’d finished, was “That was awesome!”  And he’s absolutely right, it’s a terrifically funny and inventive tale, of a Dad making up an ever more unlikely story that his kids - even though they don’t really believe him - thoroughly enjoy (and that struck a chord with me too).  From green globby aliens (lots of snot) to Priscilla, Queen of the Pirates, Professor Steg and his wonderful Floaty-Ball-Person-Carrier to Splod (a god), brightly coloured ponies and wumpires (vampires who talk with a pronounced accent that is amusing to try and read aloud) and police dinosaurs on space bikes, the pace never lets up.  Taking in time-travel (and peculiar breaks in the time space continuum), two pints of milk that can’t touch and the perils of eating dry cereal, this is great fun from start to finish.

Lavishly illustrated by Chris Riddell (whose style Dude recognised, as he’d drawn the characters for the Creepy House Reading challenge last summer), this is a great read that both of us really enjoyed and I highly recommend it. 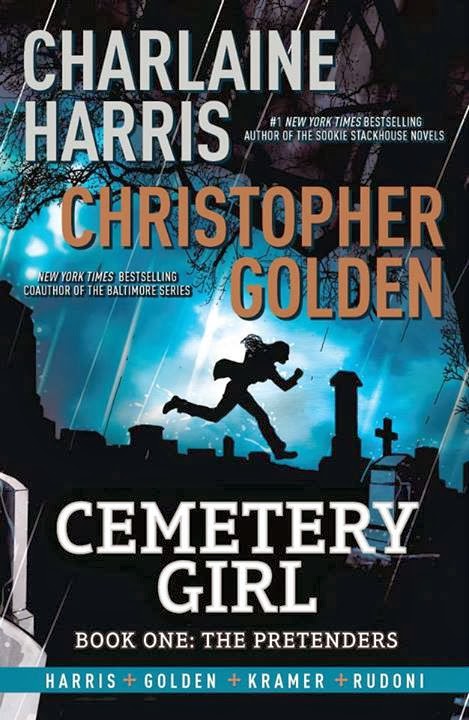 The book opens in dramatic fashion, with a young girl being attacked, drugged and left for dead in Dunhill Cemetery.  Realising that someone has tried to kill her, but with no other memory of the past, she decides to hide out in the cemetery itself, living in a crypt and stealing food and items from local houses (and also from the caretaker).  She calls herself Calexa Rose Dunhill - names she finds around her - and watching a funeral, sees a spirit escape from a tarpaulin covered grave.  One night, she witnesses a group of teenagers carrying out an occult ritual, which doesn’t work.  Later, at another funeral, she recognises the fleeing spirit as part of that group (he was killed by a drunk driver) and when they come back for another go, she watches in horror as they murder Marla, the sister of their dead friend.  But Marla doesn’t ascend, instead transferring to Calexa, taking up the empty space and making her a “haunted house”.  As Marla settles in, her memories and visions overwhelm Calexa and she has a decision to make - to continue to hide to protect herslef or trying to bring justice to the sad spirit who needs her help.

I don’t often read comics or graphic novels but this has such a great pedigree - and JF Books produce a great product - that I decided to give it a go and I’m glad I did.  It’s well written, immediate and smart, violent and poignant and although there are some small areas of repetition, it has a quick pace.  The characters, especially Calexa, Marla and Lucinda Cameron, an old woman who spots her stealing and takes an interest in her (whilst bestowing her with the name ‘cemetery girl’) are clear and defined and the cemetery makes a great location.  The artwork, by Don Kramer who has worked with both Marvel and DC, is very detailed and captures the mood of the cemetery well (I like my art clear and defined so I thought his work complimented the words perfectly, though a graphic novel aficionado might disagree with me).

Firing on all cylinders, well presented and a beautiful object in itself (I read the hardback edition with glossy pages), I enjoyed the story and the artwork and would very much recommend it.
Posted by Mark West at 15:14:00