As I mentioned in a previous post (linked from here), my friend Dave Jeffery (a very good horror writer) is part of a production company called Venomous Little Man.

Their first short film, Ascension, is now completed and having seen a copy, I can say that it’s well worth a watch.  It’s going to be entered into various festivals over the summer and if you get a chance to see it, you really should. 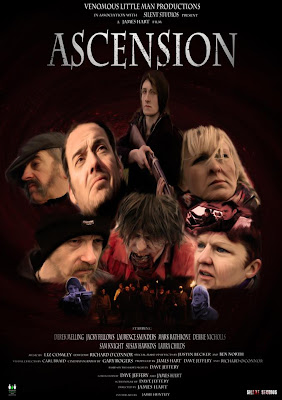 In a world savaged by an apocalypse, a small group of survivors make the ultimate sacrifice to keep their family together while the rest of the world rots. Hard choices need to be made for the good of the few.

The film opens in an industrial compound, where Joe (Derek Melling), Annie (Jacky Fellows) and Tom (Laurence Saunders) are about to go out on patrol in an effort to bring together a community - the Blakewell Spirit, as they call it).  A plague has gripped the world (effectively conveyed via news reports from Laura Childs), turning everyone it touches into a zombie and there are only a few pockets of survivors left.  On this particular mission, they find themselves cornered by some angry people, a small family who are unpredictable and violent - Eddie (Mark Rathbone), his daughter Alex (Debbie Nicholls)  and his teenaged son Carl (Sam Knight).  After a tense stand-off, where Annie shows how willing they are to join up and Tom helps Carl dispose of a zombie threat, they head back to the compound, which Joe calls ‘Ascension’. 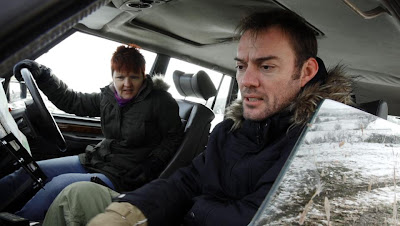 Having dabbled myself, in the late 80s, with zero budget VHS horror, I’m a big fan of low-budget films and often bemoan the fact that the market for them is very tiny.  Now I’m not talking about the shark-dinosaur-crappy-cover films you find cluttering the shelves in Blockbuster and HMV (they are low-budget, compared to most certainly, but their catering bill is bigger than what I’m discussing), I’m talking about a group of like-minded people, gathering together to tell a story with limited resources but as much talent and skill as they can muster.  Unfortunately, the stars don’t align too often and there’s always a sense of dread - for me - with watching indie films because a lot of them fall into common traps and betray their shortcomings.  That isn’t the case with Ascension.

James Hart obviously has a clear vision of how he wants the film to run and it feels as though he got it.  All dialogue is key and to the point, the relationships between the characters are fleshed-out and feel natural and the pace is maintained all the way through.  From the use of some interesting angles, good casting choices and a keen eye on how to make a zombie attack work, Hart knows his stuff and the film is all the stronger for it. 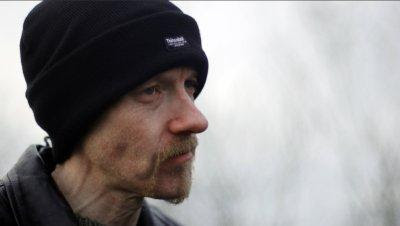 Acting is generally an issue with low-budget films but that’s not the case here with the leads - Derek Melling, Jacky Fellows and Laurence Saunders - acquitting themselves well.  There’s a lot of dialogue and it’s delivered (and received) naturally.  Of them all, Jacky probably has the most difficult pieces to work with and her scene at the end - which I shan’t go into detail over because of spoilers - is agonisingly beautiful.

The film is well shot by Gary Rogers, with an incredibly clear (digital) image that rarely strays from focus.  His static takes are composed and wonderfully rendered, taking full advantage of the widescreen and the empty locations and juxtaposed with hand-held work for the zombie attacks (which works for the sense of the film but I wasn’t overly keen on).  Brilliantly, however, there’s a clever use of a remote-controlled plane for a handful of shots that really open this up, giving a greater sense of scale to the whole enterprise.  Helping this out considerably is the editing of Richard O’Connor, with no scenes that I can recall overstaying their welcome (another common mistake) - the scenes are tight, cutting quickly between medium and two-shots and constantly keep your attention.

The music, by Liz Comley with Richard O’Connor, is measured and stately though on the copy I watched, it sometimes seemed to overpower the dialogue in the mix.

Of course, it’s a zombie film so at some point we’re going to need to see the gut-munchers in operation and Hart doesn’t skimp (though they’re used sparingly, another nice touch) with good work from Carl Braid.  From a quick attack in the field to some of our undead friends in a portakabin, the make-up is gruesome and professional (and inventive too, especially in the faces), the blood is rich and red and the intestines shine in a way I haven’t seen in a long time.

The film works well, making everything feel real and ‘lived in’.  The Range Rover the Ascension team use  is a mess of mud, the characters look at the end of their tethers and none of them are kitted out in combat gear but dressed as if out for a winter walk.  Alt-Zombie, the anthology which contains the short Dave Jeffery adapted into the screenplay, gets a nice nod on screen, which pleased me (I have a story in it too and designed the cover!).

There’s a lot to like in this film - from the writing and directing, right through the ranks - which is made by a clearly talented bunch of people and I loved it.  This is what we should think of, when people mention low-budget horror and I hope it does really well on the festival circuit (and acting as a calling card for Venomous Little Man).

If you get a chance to see this, jump at it - 32m of invention, drive, talent and good old fashioned zombie fun.

And just in case you're interested, here's the trailer.