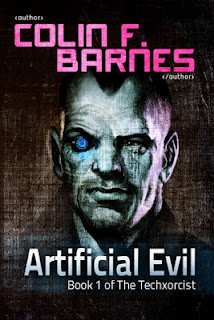 As regular readers of this blog will know, I don't generally open this space out for tours (the previous one was the lovely Cate Gardner which, it has to be said, went well).  Having said that, today I have a post from my friend Colin F Barnes, who is doing some very good work at the moment with both his own writing and also his publishing arm, Anachron Press.

So say hello to Colin and take a look at his work - it's very good and well worth your time.


* * * * *
Mark was kind enough to allow me to take over his blog today to talk about my new novel Artificial Evil: Book 1 of The Techxorcist. What is it you might ask? Well let me tell you.


Artificial Evil is the first book in a trilogy. It's a cross between Blade Runner, Mad Max, and The Exorcist. It's set in a near future, post-cataclysmic earth. The few survivors are kept within a dome city run by a so-called benevolent dictatorship called The Family. The problem with the city is that everything is monitored and assessed on a citywide network. Every individual is plugged into this network via an implanted 'Artificial Intelligent Assistant.'

On the face of it, these AIAs are very helpful. Imagine having a smart computer in your head that you can interact with via your mind. That's pretty cool, and there are a lot of very practical applications for such things. Such as: brilliant recall abilities. Image storage and using your eyes as cameras. Computational power outside of your mind. Want to figure out a sum, or calculate something? No problem; give your AIA all the factors and let it do the hard work for you.

However, practicality comes at a great cost: the loss of freedom. Because in the post-cataclysmic world, resources are incredibly short. There are no huge factories building things anymore, there aren't countries or governments or corporations to mine the earth for resources and build infrastructure and technology. There is only the dome and The Family who run it.

Due to the resources being finite, it requires a lot of management to ensure a good standard of living, and health, for everyone. And that's where the network comes in. It monitors everything; the air the population breathes, the energy they consume, the energy they create. All this adds up to a complicated set of factors that go into in the death lottery. To maintain the status quo, and thus the continued existence of humankind, The Family have deemed it necessary to control the population.

A certain amount of children are allowed to be produced only when there are sufficient resources. To achieve this, our main protagonist for the first book, Gerry Cardle, heads up the design of the algorithm that decides the death lottery. When your numbers are up, the network takes over, and via the AIA extinguishes your life and releases your resources into the system. Of course, Gerry himself is exempt from this lottery as he is a very important part of the system, but things take a sinister turn one morning when via his AIA, he's informed that his numbers have come up, and he has just seven days to live.

Thinking it's some kind of practical joke, Gerry heads into work on a Saturday morning to sort it out, but he's refused entry. Lottery winners aren't allowed into governmental buildings. Frustration builds and soon he's in an altercation with security and flung out onto the streets. Such is the confidence and reliance on the network, no one dares question it, even when someone as prominent as Gerry Cardle, the death lottery designer himself, finds his numbers up.

It is at this point he starts to discover what's behind the peculiar occurrence. While coming round from being ejected forcibly from his place of work, he's approached by a hobo resembling a priest. This man, Gabe, informs that he's possessed by a demon and that his code and AIA have been hacked. This has dire consequences not just for Gerry but the entire city. It's the first instance of any security breach.

With the aid of his new friend, and his friend's partner, a young violent hacker called, Petal, Gerry sets about finding the origins of the demon before it's too late.

Colin F. Barnes is a writer of dark and daring fiction. He takes his influence from everyday life, and the weird happenings that go on in the shadowy locales of Essex in the UK.

Growing up, Colin was always obsessed with story and often wrote short stories based on various dubious 80s and 90s TV shows. Despite taking a detour in school into the arts and graphic design, he always maintained his love of fiction and general geekery. Now, as a slightly weathered adult, Colin draws on his experiences to blend genres and create edgy, but entertaining stories.


He is currently working on a Cyberpunk/Techno thriller serial 'The Techxorcist.' which combines elements of Sci-Fi, Thriller, and Horror.

Like many writers, he has an insatiable appetite for reading, with his favourite authors being: Stephen King, William Gibson, Ray Bradbury, James Herbert, Albert Camus,  H.P Lovecraft, Clark Ashton Smith,  and a vast array of unknown authors who he has had the privilege of beta reading for.