Gary McMahon, in my opinion, is in contention for the “next big thing” mantle in horror (currently sharing said status with Adam Nevill).  I’m not the only person who thinks that, clearly, though as a point of interest, I should mention that he’s my friend and I often critique his work in draft.

I'm writing this blog post because I’ve just finished "Beyond Here Lies Nothing", the third book in his “Concrete Grove” trilogy.  As a collection, I think it’s a work of brilliance, with each volume not only working superbly well as a stand-alone novel, but also fitting into the cycle and contributing to the mythology of this godforsaken council estate.

Here are my thoughts on the trilogy, with my reviews which were originally posted to Goodreads.

The Concrete Grove (critiqued in draft)
The Estate had no formal name, it was just a grouping of streets.  But the locals called it the Concrete Grove.  Lana Fraser has been forced to move there, along with teenaged daughter Hailey, following the death of her husband.  Quickly getting herself deeply in debt with the local crimeboss, Monty Bright, she gives him her body to help pay off the sum.  But he wants more, specifically Hailey, who may just know more about the supernatural powers in the Grove than anyone realises.

This is Gary McMahon at his best, writing prose that almost seems to seethe, vibrating with anger and energy as it details the depths to which people can plummet.  Set in a depressingly real environment (very cleverly realised, sometimes painful to read) but touched with flashes of the fantastic and phantasmagorical, the Grove becomes a character in its own right, as details of its history are slowly revealed.  For a work that feels so epic, this has a surprisingly small cast - Lana and Hailey, Bright and his lead henchman Francis Boater (both terrifying characters, one almost supernatural, the other not so) and Tom, who begins a tentative relationship with Lana as his bedridden wife slowly turns into a sea creature.  But these characters fill the space admirably well, pulling the reader into the depths of their despair until we finally see the Grove in its true light - though, bearing in mind this is book one of a trilogy, I imagine we’ll see much more further down the line.

This is a terrific book, assured and dark, painful and pitiless, that maintains a cracking pace from start to finish and is aggressively individual whilst subtly nodding its head towards ‘Weaveworld’-era Clive Barker.  A fantastic read, if the other two books are anywhere near the quality of this, “The Concrete Grove Trilogy” is destined to become a series to be reckoned with.

Silent Voices
Twenty years ago, three ten-year-old boys - The Three Amigos - went missing in The Needle, in Concrete Grove.  When they were found, nobody knew what had happened to them, the boys included, but it tainted their lives and their friendship.  Now, Simon is a successful property developer in , Marty is a hard man and Brendan is a lost soul, the only one with family but ground down by life.  Simon is haunted by the past and, spurred on by mysterious letters and emails, he decides to head back to the Grove - and his old friends - and see if he can uncover the truth.
Welcome back to The Concrete Grove, the second in McMahon’s trilogy about that eponymous hell-hole of an estate.  Moving on from the events in book one (Hailey and Bingo re-appear, the former with seemingly more to do with the Grove than we’d originally thought), this spends a lot of time getting to know the three leads, how their lives are and how they’ve changed since their childhood (we get some flashbacks to them as ten-year-olds) and the book works fantastically well because of that.  We are shown their pain, we are shown how it affects - and sometimes runs - their lives, we are made to empathise with their existence.  Simon is a millionaire, with a Russian lingerie model girlfriend, who feels that something is missing from his life.  Brendan has a wife and children that he loves - and who love him dearly (Jane, his wife, is wonderfully developed and rounded, even though a lot more of her story is hinted at than shown) - but he’s one of life’s losers.  The same can’t be said for Marty who was psychologically and physically scarred by his father and continues to push his body and his hard-man existence to extremes.  An occasional doorman, he lost his boxing licence after an accident that killed the only girl he ever truly loved and now he takes part in illegal bare-knuckle fights.  The moments of horror all focus on the main characters - Brendan and his acne, his son and a small bird (a scene that is very disturbing) and Marty’s fight with an untrained Polish opponent is as brutal as anything I’ve read in a long time.
The construction of the novel is pitch-perfect, doling out just enough information to keep the plot moving forward, allowing the reader to piece it all together - who is Captain Clickety, what are the hummingbirds doing, why is Bingo in The Needle, why is Marty obsessed with Humpty Dumpty?  We see more of what’s powering the grove, more of what’s inside The Needle and the confrontation between good and evil that doesn’t end here.

Gary McMahon is one of those writers who constantly ups his game, delivering more power and emotion with every new work.  I thought “The Concrete Grove” was an astonishing achievement, moving away from straight horror into something that was much more of a horror/urban fantasy hybrid, but this novel tops that, pushing both sub-genres further.  He barely puts a foot wrong, immersing the reader completely into the world, writing with strength and passion about friendship, family history, urban history, location and sins of the past and it’s genuinely brilliant stuff.  I've been lucky enough to read “The End” (awaiting publication) and since I did, I've considered it my favourite McMahon novel - this runs it very close and has perhaps his bleakest climax so far.
With “Silent Voices”, Gary McMahon writes about childhood and friendship and how adults can perhaps reclaim the past and he does it superbly, with as much love and tenderness and bleakness and brutality as we've come to expect from him.  I can’t wait to find out what the third Concrete Grove has to offer us.

Beyond Here Lies Nothing
The third part of the Concrete Grove trilogy, this extremely accomplished piece of work has four main strands - Marc Price is writing a book about the Northumberland Poltergeist phenomenon in the 70s; Abby Hansen, a physical and emotional wreck whose daughter Tessa was one of the ‘Gone Away Girls’ (young girls kidnapped by persons unknown and still missing); Craig Royle, a copper who is struggling to keep himself together, haunted as he is by the ‘Gone Away Girls’ and Erik Best, a gangland thug who is a colleague of Marty, from ‘Silent Voices’ (and Tessa’s father).

To explain more of the plot would be to the detriment of the reading (though I should mention the scarecrows, which is a scary image brilliantly used) but it’s as strong and uncomfortable as its two sister volumes, whilst at the same time upping the mythology of The Grove.

With some powerhouse writing and a huge sense of scale, McMahon brings the trilogy to an almost apocalyptic finale, never once losing track of the fact that however explosive everything else is, the book runs on the strength of its characters.  Here, as ever, he displays a fine touch, investing even minor characters with quirks and personality that make what happens to them all the more interesting.  Nicely tying up threads from the previous two books (it was good to see Tom Stains again), this is horror with ambition, not afraid to tackle the human condition whilst placing it in mythological, almost fantastical realms at times and makes me want to see the next McMahon book on the shelves right now!  A stunning read, very highly recommended. 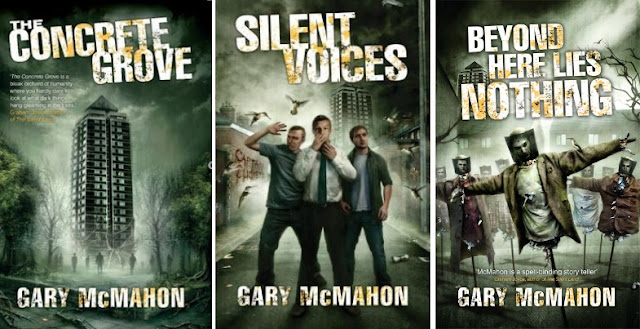