You know how sometimes you read a report and it appears as if the person wasn't at the event at all? This is one of those, I'm afraid - I had a great time, I met a lot of good people, I went to a reading but I didn't do any of the main panels. So other people might have far more accurate reports of the con than I do. Oh well, I had a good time.

I’d never been in the Fishmarket art centre in Northampton before, but it’s a good space - open and airy, with plenty of natural light. There’s a little café at the top, small special-interest shops down the sides and plenty of room to move about.

Paul from the NSFWG was manning the door when I arrived, so I had a chat with him and Susan (another NSFWG member). Russell Morgan, an artist from Kettering that I knew from Facebook but only met for the first time at FantasyCon, came over - he had some (very good) pictures in the art show and we had a drink and a chat, about writing and drawing, influences and horror and a project that we might work on together.

There were panels and readings through the day - the panels were in the main area (which carried quite a bit of echo), the readings at the back, in a little room that was rather exotically called a studio. I unfortunately only managed one reading - though I did get to meet Sam Stone, which was a bonus - held by Jaine Fenn, Ian Whates and Stephen Palmer, who let Ian read his piece too. Very good, with some great excerpts read, but the room got a little stuffy after a while.
After chatting with Sam about writing, later joined by David Howe, I then checked out the stalls, met Ian Whates’ lovely partner and finally got to see “Shoes, Ships & Cadavers” (the anthology of new writing from the Northampton SF Writers Group, edited by Ian Whates and Ian Watson, with a terrific introduction by Alan Moore). Neil Bond & I oohed-and-aahed over it and it’s lovely looking tome. He & I sat and chatted for a while, joined by Donna Scott (both members of the writing group).

After lunch (where I managed to pick up a long sought 70s sleaze novel from the market in town), I took to door duty with Tim Taylor (also from the NSFWG), where we were entertained by the Jester and his magic show and chatted about writing, our plans and our processes. All good fun.

Then there was a real buzz in the air, as Alan Moore arrived. Now I’ve never met Alan Moore before (he’s a Northampton resident) and the only real contact I’ve had with him has been interviews regarding films of his work, where he comes across as quite crotchety (though it has to be said, having seen the films, I can see his viewpoint). His very lovely words about my story “What We Do Sometimes, Without Thinking” made me think differently, but I was still a bit trepidatious when I went to introduce myself. How much of an idiot am I? “Hello,” I said, “my name’s Mark West and I just wanted to thank you for your kind words about my story.” “Which one’s yours?” he asked. I told him it was the train one and he remembered it, complimented me on it again and was full of praise for the book and what we were doing and then he said “keep it local” What a truly lovely man, all beard and great jacket and rings, but exuding this wonderfully genial air. I didn’t get to sit next to him on the signing panel (damn you, Tim!), instead I was sat between Neil and Dr Steve and had a great time. The book seemed to do well, people were very interested and hey, if you’re a writer, being on a signing panel is terrific fun. Three months ago, I wasn’t even in the NSFWG. Now I was, I’d written a story in a week and met Alan Moore through it. Sometimes, you know, this writing lark is bloody brilliant!

I had to head off a little after this and didn’t get to say goodbye to everyone, but the rest of NewCon partied into the night (and then met up again the next day). It was a cracking con, I really enjoyed myself and can’t wait for the next one. 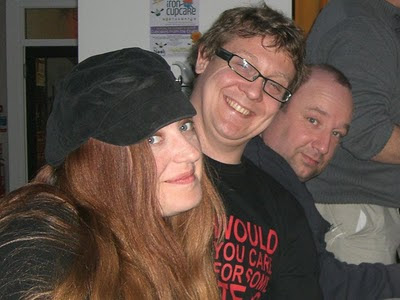