What you see, whilst train chasing

Dude & I like to go train chasing. It's a term I invented (and used in my story "What We Do Sometimes, Without Thinking") because he likes trains and loves to watch them and I thought calling ourselves trainspotters this early in the day was a bit limiting. But train chasing sounds cool, I think.

Anyway, one of our haunts is the bridge on the road that connects Rushton to Pipewell. It's relatively safe, not too much traffic and with a kerb and the views are very nice. A week or so ago, we went out and I took this picture, looking towards Desborough, with Triangular Lodge just off to the left (there's plenty of history, some of it quite macabre, around here).

I love train chasing because I get to spend quality time with the Dude - it also has other benefits too! 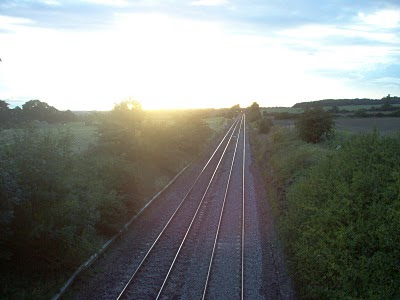