Off to the Lansdowne once more, for a gathering organised by Sue & Morgan Philips. After struggling with a parking meter at DeMontfort Hall that somehow charged me twice, I made my way to the pub and ‘The Pits’, where we normally meet. Already there were the Bradshaws, Sue & Morgan and Simon Marshall-Jones. It was good to see Sue & Morgan again and brilliant to meet Simon in the flesh - we’ve corresponded a lot over the Net, the past few months and critiqued each others work, but this was our first meeting.

Realising we were both hungry, we went across the road for a cob lunch and sat on some steps in the afternoon sun, watching the world go by and talking all things horror. Fantastic twenty minutes and then we went back into the pub, where Jay Eales & Selina Lock had arrived. Two other newcomers were also there, folk who’d seen the event listed in Ansible and decided to come along. The man - John, I think - took the first reading slot with a (clearly) unrehearsed ramble about how science feeds the horror genre (I think). After he finished, I read an excerpt from “Risen Wife” and then put the “Life Once Lived” chapbook into the raffle (from which I managed a couple of wins and picked up some of Jay & Selina’s comics, which are seriously good fun), Simon did a blog reading and Sue did a reading. 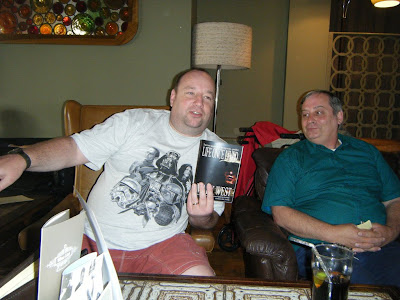 Me, just about to launch into "Risen Wife", as Morgan Philips looks on

Then it was time for nattering and, amongst many other topics, we got onto reviewing and I regaled them with some of the dross that I’ve had to sit through for VideoVista - it certainly kept them amused. We had curry at the Agra again, very nice as always and then it was time to head home. Simon, who comes from MK, was facing a 3+ hour wait so I offered to drive him home (without fully working out the ramifications of such a venture) and we kept up our chat all the way back to that city.

It was late when I got in, but it’d been a great gathering, even though the turnout (due to holidays and illnesses) was low (though as Selina said, at least we all got a chance to talk to each other, which doesn’t always happen). Great fun and over way too quickly, as always. Roll on FCon! 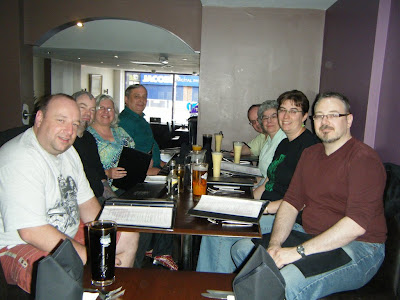 (thanks for Selina Lock for the photographs)
Posted by Mark West at 12:10:00