Ormeshadow: A Q&A with Priya Sharma

In a new edition of the occasional series, I want to tell you about a book I've read and loved, which I think adds to the chilling/weird genre and that I think you'll enjoy if you're a fan. 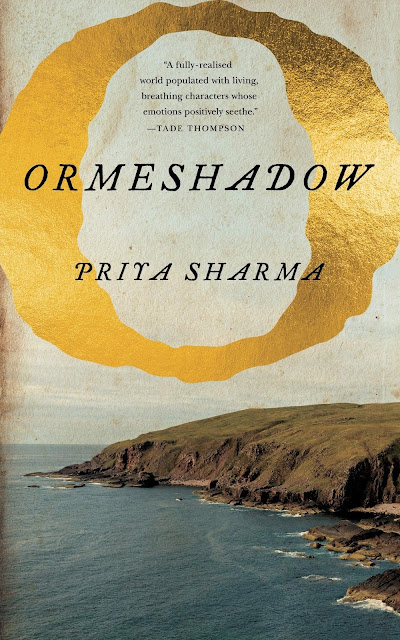 Acclaimed author Priya Sharma transports readers back in time with Ormeshadow, a coming-of-age story as dark and rich as good soil.
Burning with resentment and intrigue, this fantastical family drama invites readers to dig up the secrets of the Belman family, and wonder whether myths and legends are real enough to answer for a history of sin.

Uprooted from Bath by his father's failures, Gideon Belman finds himself stranded on Ormeshadow farm, an ancient place of chalk and ash and shadow. The land crests the Orme, a buried, sleeping dragon that dreams resentment, jealousy, estrangement, death. Or so the folklore says (Orme is the Old English for worm or dragon). Growing up in a house that hates him, Gideon finds his only comforts in the land, where he will live or die in the shadow of the Orme, as all his family has.

This is a beautifully observed, utterly absorbing tale that grabs hold of you from the off and doesn’t let go even after you’ve read the last word.  Strong and bold, this is a dark coming-of-age tale, full of familial deceit, recriminations and abuse, but also has some lyrical touches of brightness to it.  The characterisation is vivid and understated, the use of locations is masterful and the pacing is pitch-perfect, with just enough told.  Even better is the elegant writing, a turn-of-phrase here, an small mention there, burying the complexity of the tale in apparently simple language that must be read to be believed.  I absolutely recommend this book, a masterpiece in the making - I loved it.

As I'm lucky enough to know Priya, I decided to ask her some questions about the book and she graciously agreed to answer them.
(note - since this interview took place, Ormeshadow deservedly won the British Fantasy Award for Best Novella).
MW:   It's an excellent read, but where did Ormeshadow come from?
PS:   It started as notes for a short story. I was walking up on the Great Orme, a headland above the Welsh town of Llandudno. It’s a beautiful place with dramatic views.  Orme is Old Norse for worme or dragon.
I had the image of a small boy taking refuge in a cave that formed the sleeping dragon’s ear. A lonely boy who’d been hurt and the Orme was his only friend and confidant. That’s where the story started.
MW:   How much research did you have to do because, as a reader, it felt very authentic?
PS:   Thank you! I love researching for stories. The trick is to know how much (or little) to use, so as not to bog down the reader, isn’t it?  I was thinking a lot about Thomas Hardy’s novels when I wrote this. There’s so much darkness in his characters and their relationships.
The one thing I was careful to research was the sheep farming aspect. I have a friend who had a small holding with a few sheep, which was useful. You can learn a lot from the internet, but I love talking to people – you get details about how things feel and smell.
MW:   I loved the dragon aspect, what led you to that?

PS:   The Orme was such a gift- it was presented to me on a plate from my visits there. The dragon allowed me the fun of inventing a mythology around it and root the family history element even deeper as I knitted them together.
MW:   The family elements - especially the terror and the desire for love - are beautifully conveyed. Did that come out stronger in the writing than you’d planned, or did it work exactly how you wanted it to?
PS:   Thank you!
I had to trim the story down to submit it to Tor during their open period for novellas. I lost a good 5000 words, which I found difficult. I worry that some of the nuances of the relationships were lost. I had a strong sense of Gideon and his parents at the outset, but they developed as I wrote and rewrote. It’s  an old piece, so has had a lot of reworking.
There are things I worry that I’ve not fully conveyed when I look at it now. Perhaps I’d edit it differently. For example, Maud craves female friendship and there’s a burgeoning friendship between her and Clare, before Thomas stamps all over it. I had to cut a whole chapter set in church, where Eliza is being shamed for being unwed and pregnant. The father is the abusive schoolmaster. I wonder if I’m too light handed with my signalling for that in the schoolroom chapter.
I don’t judge my characters. They are what they are. If I’ve given the reader that impression, that’s a failing in my writing.
MW:   You didn't give this reader than impression, I can honestly say!  So what are you working on now?

PS:   I’ve just finished a short story based on a work by William Blake. I won’t name it for now, but I’ve always wondered what it meant. It’s monstrous and surreal. I enjoyed the process of researching it and figuring it out for myself. He was an interesting character- abolitionist, antimonarchist, feminist and visionary. I was also interested in his wife, Catherine Blake. She’s becoming more and more recognised as an integral part of the work they produced together- from its design to its execution.
MW:   Good luck with that and thanks for being on the blog!
PS:   Thanks so much for having me here.

This is her official bio, but I'd also add that she's wonderful company and has the best handwriting of anyone I've ever met.

Priya Sharma’s fiction has appeared venues such as Interzone, Black Static, Nightmare, The Dark and Tor. She’s been anthologised in several of Ellen Datlow’s  Best Horror of the Year series and Paula Guran’s Year’s Best Dark Fantasy & Horror series, among other.  She’s also been on many Locus’ Recommended Reading Lists.  She is a Grand Judge for the Aeon Award, an annual writing competition run by Albedo One, Ireland’s magazine of the Fantastic.
Priya is a Shirley Jackson Award and British Fantasy Award winner, as well as a Locus Award finalist and her collection, All the Fabulous Beasts, was published by Undertow Publications.
Priya can be found online here
Posted by Mark West at 09:00:00