At Home In The Shadows, by Gary McMahon

In a new edition of the occasional series, I want to tell you about a book I've read and loved, which I think adds to the horror genre and that I think you'll enjoy if you're a fan (though I'm getting to it a little late, it was published last year). 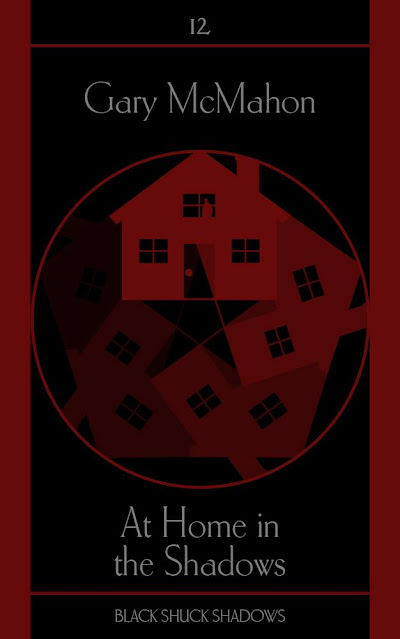 Black Shuck Shadows presents a collectable series of micro-collections, intended as a sampler to introduce readers to the best in classic and modern horror.In At Home in the Shadows, McMahon offers five tales of homeowner horror.
I've long been a fan of Gary McMahon (he's featured on the blog a few times and I interviewed him here, earlier this year) and bought this book last year.  As per the series design, it's a handy little paperback that somehow slipped down the side of some other books and it was only during a sort-out at the weekend that I re-discovered it and tucked in.
The twelfth in the Black Shuck Shadows series (smartly beautiful mini-collections), this gathers five short stories from the always dependable Gary McMahon, and also serves as a perfect sampler for his fiction.  All feature houses in one form or another (and our ties to them, bad as often as good) and the sense of family, mostly as bits of it wither or collapse completely.  Text Found On A Defunct Website is good fun, an estate agents description that slips in depravity without warning while The Chair and The Table feature the same character at different stages in his life, coping with family breakdown and illness.  On The Walls, my favourite of the collection, features Jill, going to clear her childhood home following the death of her mother and discovering a painting on the wall that has supernatural powers.  Dark and oppressive, its focus on mundane details - a Travelodge, an affair, rain, peeling wallpaper - just gives the story more power.  Open House rounds out the collection with a house apparently striking back.  Cold and clinical, but a good eye for detail and the hurt a family can cause itself (however unintentionally), this is powerful horror fiction and I would highly recommend it.

For more information, Gary's website can be found here.
Black Shuck Books can be found online here.
Posted by Mark West at 09:00:00