I've discussed this incident on the blog before but with Halloween coming up - and the fact that it happened 30 years ago this August - I thought it worth another mention.  I adore the horror genre but I'm relatively rational and, like everyone else, I've often placated my son when he's scared with the phrase "there's nothing there."

But what if there is?
I've loved ghost stories since I was a kid and as a ten-year-old there wasn’t much better than losing myself in a Three Investigator book, or a Peter Haining or Mary Danby collection. I formed ghost hunting groups with friends (one day, I might tell you about the ghost at Blue Bridge, who was said to be Old Nick himself), read as much as I could and scared myself silly with real-life ghost books from the library. Happy days.

I have had three brushes with what I think are perhaps most accurately described as unidentified phenomena. One was with my childhood friend Nick and he still talks about the incident, almost forty years later. Two were with my friend Craig – one was an unidentified flying object and the other, this one, was about ghosts.

In 1989, he & I went on holiday to Portugal. He worked for a travel company, we got a reduced rate, we had a great time. Our hotel was a lovely place, run by a bear of an Englishman, with local staff. Beyond the restaurant/club house was a patio area, then two blocks of apartments – we were on the ground floor of the first, facing back towards the house. We got on well with fellow guests, there was a good atmosphere in general, it was a cracking holiday.

Towards the end of the week, having sworn off drink for a few days (we were twenty and didn’t realise the shots were doubles), we’d had a meal and enjoyed the evening in the club and gone back to our room. It wasn’t a big room – through the front door, the bathroom opened off the hall, then the main room had twin beds, patio doors (which faced out towards the main house) and built in wardrobes across from them (against the back of the bathroom wall). I slept in the bed nearest the wardrobes, Craig had the bed by the window.

On this particular night, nothing spectacular had happened. We chatted for a while, then went to sleep.

I woke up and knew it was the middle of the night, though it wasn’t particularly dark (we tended to keep the curtains open). As my eyes got accustomed to the light, I was very surprised to see someone crouching down beside the bed, staring at me. My over-riding memory of it now is that it looked like one of the red guards from the Flash Gordon film – a monks habit, with the hood drawn up and some kind of gas mask/breathing apparatus obscuring the face. I don’t remember reacting to this interloper, but watched as he stood up and walked carefully around my bed and along the back wall. As the thing reached the end of Craig’s bed (with me now up on one elbow, watching it go), Craig sat bolt upright in bed (and that startled me more than my ghost had).

I fumbled for my watch. “Ten past three.”

“Okay,” he said and laid back down. I couldn’t see my ghost any more, so I too laid down and went back to sleep.

The next morning, he was up bright and early and went to reception to make a call. When he got back, he explained he’d wanted to ring his parents, as he was really worried. I asked why and he explained he’d woken up to see two people sitting on the end of his bed, watching him. His first thought was that it must be his parents, checking he was okay, but when he rang home, they were fine and healthy.

As we sat there, on our beds in the early morning Portuguese sunshine, I told him about the thing I’d seen. As we talked, it came to me that maybe my ghost had been moving slowly because he was threading his way between things I couldn’t see, perhaps guests at a party. Guests that might, conceivably, be sitting at the end of Craig’s bed saying “look at that, a ghost person in bed.”

Completely stumped as to what was going on, but convinced the party angle was the one to go for, we trooped off to reception (I don’t know that we expected to find out, maybe that a party had been going on years before, until a fire broke out and killed everyone, but it would have been a start).  We knew the girl behind the counter, who was very nice and had taught us a few words and phrases in Portugese and haltingly tried to explain ourselves.

She frowned at us, so we told her the story. About halfway through, she started to hyperventilate. Towards the end, she looked genuinely upset. When we got to the time part, she was very agitated. So much so that she went to get the manager’s wife (a fearsome, if friendly, lady – when I got sunstroke just after arriving, she made sure I got grilled chicken for dinner to help me, even though it wasn’t on the menu). We re-told our story, conscious of the poor receptionist who was, by now, sitting in the backroom being comforted by her colleagues. 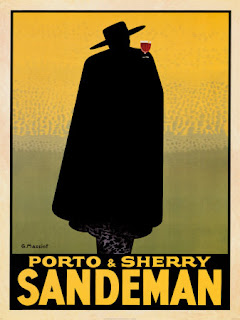 The manager’s wife listened to our story, looking at us to make sure we weren’t pulling her leg. She tried the obvious – were monks on my mind, there was a brand of drink called Sandeman whose logo was a man in a cape, all manner of stuff – but realised our story wasn’t going to change. She took us to one side and said, “If you promise not to mention this again, whilst you’re here, you can have free meals for the rest of your stay.”

Did my years of wanting to be a ghost-hunter kick in? Was my drive to discover the paranormal world enough that I would refuse? No, I’m now ashamed to admit that Craig & I thought with our bellies and went for the free meal option.

So, story ended right? We saw something we couldn’t explain, we freaked out a receptionist (who might have been prone to over-react, who knows?) and we were then offered hush money. I’d love to report that we experienced more phenomena but we didn’t – I was wary about being in the room on my own for the duration of our stay, but neither of us ever saw anything untoward in that room again.

It was all finished, except for something we overhead that night at dinner. Sharing our floor in the block were ex-employees of BOAC. Friendly, chatty and very funny, we got on well with them (bearing in mind they were perhaps fifty years older than us) and our little table was next to the large one they occupied.

Obviously, part of our deal was to tell no-one and we adhered to that. So imagine our surprise when the BOAC table started to talk about their previous night. Every one of them had woken up – either from hearing something or through a bad dream – and all of them were tired. We couldn’t resist and leaned back.

“What time was this then?” we asked.

There was general murmuring from the table, as people thought back about it.

So what time did five or six couples – a total of seven separate rooms – all wake up, on the same night, when nothing untoward was happening?

“Ten past three,” they said.