Sometimes, I think, we don't talk enough about friends and what they mean to us, especially those that go back a long way in our lives.
I met Nick Duncan in September 1976, on the first day of junior school, just after my family had moved from Corby to Rothwell.  I don't know why Mrs Reid, our teacher, sat us next to each other - I didn't know absolutely anybody - but I'm really glad she did.  We became firm friends that day and, I'm happy to say, we still are.

Our friendship has been a bit of a rollercoaster at times but none of the 'downs' were that terrible with hindsight and most of the ups form the anecdotes of my life.  After school, he joined the RAF and moved away and that was a wrench, having to get used to a long-distance friendship.  This was in the late 80s and when we got bored of writing letters, we'd send each other taped messages - at least one side of a D90, occasionally padded out with new songs that we liked.  I still have some of them, though I haven't listened to one for years (just in case the tape snaps).  To this day, I've never quite got used to the distance - he now lives in Bristol - though that phrase, when you meet up again it's like you were never away, is entirely true. 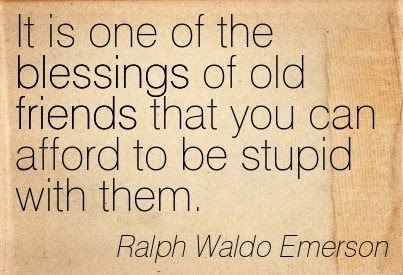 Nick is my brother-from-another-mother and as kids, we spent so much time in each others houses that you often got fed by whichever Mum was in your orbit.  I was his Best Man, he was mine, he's Dude's godfather and - thankfully - he and Alison get on brilliantly well.

He hasn't had the best of times over the past couple of years and, on occasion, our friendship has really been tested - on both sides - but he's through it now, happier than I remember him being for a while and we're already planning adventures for the summer.

Today is his birthday.  I have known him for 38 years of his 45 and I hope we're best friends for at least the same amount again!