For years - literally decades - one of my major writing ambitions has been to wander into a bookshop and see one of my novels on the shelves.

Kettering Waterstones. Bottom shelf, three copies of "In The Rain With The Dead". 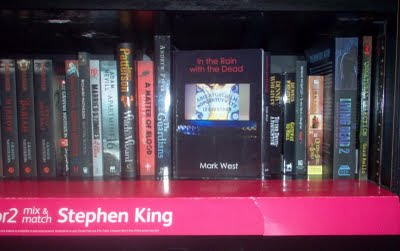 Email ThisBlogThis!Share to TwitterShare to FacebookShare to Pinterest
Labels: in the rain with the dead, writing

Another (great) "ill at ease" review!

Another great review, this time from Colum McKnight at Dreadful Tales - read it here.

"Ill At Ease could easily pass itself off as the first volume in a series of chapbooks. All of the writers involved brings forth a high caliber writing, and a true understanding of how to scare an audience and, at the very least, how to creep out their audience with seemingly innocent situations gone awry."

Just in case this leads you to want to buy it, or get more information, you might find the following useful:

Purchase from Amazon in the UK here

Purchase from Amazon in the US here

Or get it from Smashwords here

In addition, you could also join our Facebook group
Posted by Mark West at 22:21:00 No comments:

Email ThisBlogThis!Share to TwitterShare to FacebookShare to Pinterest
Labels: ill at ease, review

The August issue of VideoVista is now on-line, where I review “Robot Chicken” and the really rather good “The Devil’s Rock”, co-written by my friend Paul Finch.

Plenty of other great reviews too!
Posted by Mark West at 14:13:00 No comments:

Email ThisBlogThis!Share to TwitterShare to FacebookShare to Pinterest
Labels: review


The message came through from the Terror Scribes Facebook Group - a gathering was going to be held, at the Royal Oak in Chesterfield, on Saturday 16th July. Did I want to go?

A Terror Scribes gathering? Organised by the head honcho, John B Ford, himself? In the spiritual hometown of Chesterfield? Oh yes, I was definitely in.

I decided to catch the train up, for ease and as Alison & Dude waved me off from the platform, I put on my MP3 player, got out my book and settled in (then had to change at Leicester, for the train that would take me directly to Chesterfield). Due to a delay, it was a little after two when I arrived and met up with Steve Bacon. He & I have had a busy year since we last met up (for the first time) at FantasyCon in 2011 - we’ve each written a novella for a joint collection and devised, written and published “ill at ease” with Neil Williams. It was great to see him and we walked up towards the town, catching up (email is great, as is Facebook, but nothing beats chatting face-to-face). It took us a while to find the pub - we later realised we’d strolled right past it - and then we were in, pretty much the last of the bunch to arrive.

The Royal Oak was an old coach-house, very nicely restored and - probably - with a lot of its original features. It was the ideal place for a gathering except turnout had been good, so it was a little cramped. Steve & I made it through the door and that, pretty much, was where we stayed for the remainder of the afternoon. Paul Kane & Marie O’Regan were sitting at the nearest table, along with Jay Eales & Selina Lock (with whom - “roadtrip!” - I’m travelling down to Brighton in late September for FantasyCon 2011) and we caught up with them for a while. Moving away from us, deeper into the narrow room, were Sue & Morgan Philips (who’d done an excellent job, organising the last few gatherings in Leicester), Des Knight, the wonderful John B. Ford, Simon Clark, Paul & Coleen Bradshaw, Simon Bestwick and Derek Fox. The latter had also brought along a few folk - three nice ladies and a chap in a terrific hat - from his writing class. In addition, there were three people I’d never met before, a writer called Lee Wilson and a couple who sat by the door, a very shy lady (who was nice to chat to) and her partner. Later arrivals than us included Martin Roberts & Helen Hopley and Steve Lines & Loretta Mansell - and they had the best excuse, having travelled up from Calne in Wiltshire. 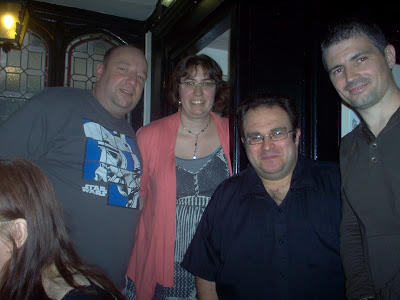 Me, Selina, Simon and Steve

There was a buffet and a well-staffed bar and conversations struck up immediately. Steve & I, along with Simon and Selina (who’d decided to stand by the door to get some fresh air), expounded upon just about everything - comics to horror, the News Of The World to politics in general, feminism and women in anthologies - and it was a genuine delight to stand for an hour or more, talking with like-minded folk.

As a little side-bar here, I have to say I have a deep affection for The Terror Scribes. Back when I first discovered the small press, I kept reading about gatherings and meet-ups and desperately wanted to get involved. My first gathering was in Sheffield, at the Howard, in July 2000 (the original con report is here if you’re interested) and the roll call of people I met that day was incredible, the bulk of whom I’m pleased to say I’m still friends with. It was also the first time I’d ever met a famous writer, in Simon Clark, who was very down-to-earth and approachable. People made the effort to talk to me, to include me and their generosity and friendship has really stuck with me,. I’ve tried to attend as many gatherings as I could in the intervening years (including the fantastic one in Birmingham in 2002) and I’ve yet to go along to one that I didn’t enjoy.

The raffle kicked off then, eventually raising £45 for Alzheimers Care and seeing just about everyone bag at least two prizes. As a nice surprise, Steve had brought along a couple of copies of “Conjure” - always a treat to see that cover! - and I was asked to sign them, which goes a long way to making a writers afternoon! I picked up a Leisure edition of Simon Clark’s “The Tower” and got him to sign it for me.

Unfortunately, some of the gathered had to leave for various reasons and we lost the members of Derek’s writing group and Steve Bacon. Good to see them all, though. The readings followed, a longstanding treat of the gatherings. Derek led, then Coleen, Simon (with an excerpt from “Angels Of The Silences”), Martin (with a story he’d only just written, apparently), John and Sue. I read the train chasing sequence from “What We Do Sometimes, Without Thinking” and Jay followed me. They all seemed to go down well, which is always reassuring. 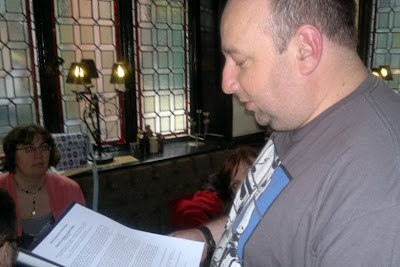 Me, reading about train chasing. Selina tries not to nod off in the background

By then, time was creeping on so we headed out for the curry house and, watching everyone gathered outside the pub waiting for stragglers, it was good to see so many smiling faces. We made our way through the Shambles and into town - with Simon Clark peeling off to catch his train - to the Indian. Ushered upstairs, we took up a long table and two roundtables, which separated us unfortunately. However, I shared my table with Marie & Paul, Martin & Helen, Loretta & Steve and Jay & Selina and Des Knight, so conversation never flagged.

The curry is an integral part of a gathering and, unfortunately, mine wasn’t good. Since I had to catch a train home, I had my main when everyone else had their starters and it wasn’t particularly warm but it was particularly stodgy. Having eaten what I could, I held out as long as possible but the time had come, so I said my goodbyes, shook plenty of hands and headed off to the train station.

For some reason, the train home this time swapped at Leicester, where I had a 15 minute wait. I stood on the platform with my fellow evacuees, in the gathering twilight, listening to my MP3 player. “Everybody Hurts” came on and the sounds, combined with what I could see - a small station and a bridge, houses being built across the way, the bright shades of day fading to black in the sky - inspired me. I might not use the imagery or the feelings it conjured for a while but I know I will, one day, because that’s what I love about Terror Scribes gatherings (and FantasyCon). I adore being around other writers and creative types, listening to processes, discussing ideas and solutions and always come away feeling re-energised about my writing.

A great gathering and it was good to see everyone again. Now, roll on the next one!
Posted by Mark West at 17:00:00 1 comment: