I know some writers...

Yesterday, Matthew & I called into Waterstones Kettering as my friend, Sue Moorcroft, was having a signing there. It’s been a while since we spoke, face-to-face and it was nice to catch up with her - and for her to meet Matthew. What was even nicer was to see and appreciate how far she’s come in her career since we met at Kettering Writers Workshop (see previous entry). 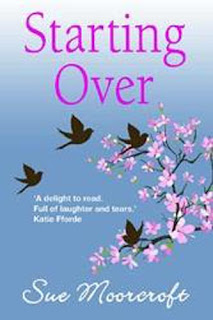 I picked up a copy of her book - “Starting Over” - and was pleased to see that I had a mention in the acknowledgements (where I persuaded her to not use the word ‘piratical’ quite so much). I first read the book, years ago, as “Fresh Sheets” and thoroughly enjoyed - it was also one of the first full critiques I ever did. Sue has a light, non-fussy style, her books are amusing and elegantly constructed and never give you exactly what you expect to get. Her follow-up book, “All That Mullarkey” is even better and I actually have Beth reading it in “Conjure” (which was written in 2004, to give you an idea of timelines) - that book will be published later this year.

It’s nice to see when people you know, who have a love of the craft and a real skill, actually do well for themselves. Sue is making real in-roads into the Romance/Chick-Lit arena, over in horror Gary McMahon (for one) seems to be taking off like a rocket and now Conrad Williams is coming out with a dark crime novel (and I’m really looking forward to that).
In other news, I haven’t done any writing yet.
Posted by Mark West at 23:51:00 No comments:

When I was growing up, I was the only 'creative writer' that I knew - people read my stuff, they seemed to like what I did, but I was the only kid doing it. In 1998, thanks to a horror anthology called 'Dark Visions', I discovered the small press and in 1999 I made my first sale (to Sci-Fright). Back then, the UK small press was predominantly print based - the Internet was still in its infancy to mere mortals and so I have a nice collection of books sitting on a shelf, containing some of my short stories.

Anyway, at about this time, I thought I might like to join a Writers Group, to see if there was anything I could pick up about moving forward. I found a poster, in Kettering library, for the Kettering Writers Workshop and I joined up.

I'm not entirely sure that the group did teach me much at all, but I did enjoy going - we met once a month at the Melton Road Community Centre and took along stuff to critique or read out (the centre later provided a key location in my novelette "The Mill", which was very successful to me). The group leader, Sally Angel, stressed that you didn't have to be published to join, or even want to be and as it was, the two most successful members were myself and Sue Moorcroft and both of us made our own leads and luck. Sue is now successful, a full-time writer and making great inroads in romantic/chick-lit fiction. If you've got this far into my web-site, you know what I'm doing now.

Sue & I, I think, used to wind Sally up because we were doing exactly what the group was supposedly pushing us towards, but we were the only ones really going for it. Everyone else was doing something they loved, enjoying the thrill of creation and reading their stuff and that's great, though I did get a little saddened towards the end of my membership when people got excited about appearing in poetry anthologies, where they had to buy a copy of the hardback edition. But no matter - I left the group in 2000, when I started night-school to do my AAT qualifications and I have no idea if it's still going. Part of me hopes so, but most of me assumes not.

I'm hoping to join another group, in Northampton, with some very prolific and successful members and I hope it gives me the same kind of push that Kettering did. 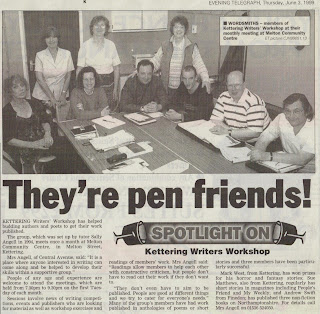 This appeared in the Kettering Evening Telegraph on Thursday 3rd June 1999. I am in the middle of the picture and Sue is sitting to my right. Simon, a beat poet (whose work I really liked) is to my left. The lady behind Simon and myself, Anne, was really supportive of me and my horror stories, but she had to leave when her Parkinson's meant she couldn't hold a pen - a great shame and a lovely lady. Sally, for some reason, isn't in the photograph.
Posted by Mark West at 11:42:00 No comments:

Everything comes back around

Still battling this damned lurgy, it’s been well over a week now and I still feel as rough as a bag of bricks. But I won’t complain…


It was my niece Lucy’s Christening on Sunday and we had a great day - I love being the Godfather. As we were getting ready to go, I put on my suit and Matthew was in the bedroom with me. As I was putting my tie on, he asked if he could wear one and, for a moment, I was stumped. Then I remembered my old red leather skinny tie, from back in the 80s, which was still in my wardrobe. So I pulled it out, tied it for him and put the excess (and there was a lot) in his pocket. And my goodness, did the Dude look cool? Well, I’ll let you decide: 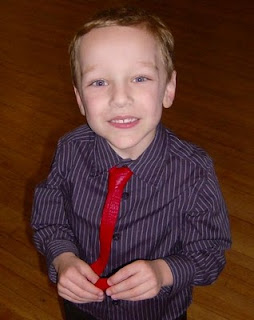 This is Dude, yesterday, looking like he just stepped fresh out of the New Wave scene in the early 80s. Seriously, how cool does he look? 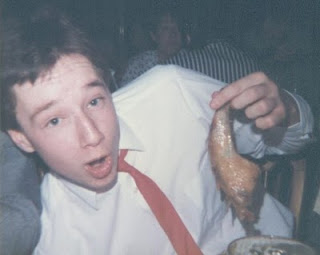 And this is me, in 1987 (or thereabouts), modelling the same tie. I didn't always look like this in the 80s, but we used to go to the chicken & chip discos at the Hunting Lodge (back when it wasn't quite as refined as it is today) and we all took the piss out of the chicken (if you got a couple of forkfuls of meat, you were lucky). Anyway, ignore the facial expression and the chicken, check out the tie!
Posted by Mark West at 23:10:00 No comments:

I've added a new page, gathering together my various convention reports over the years. The link is on the box to the right, or you can click here.

Putting it together this evening, it's interesting to see the people I've met over the years and how some of them have faded away from the writing/horror scene altogether and how others have gone from strength-to-strength.

It's been a weird week 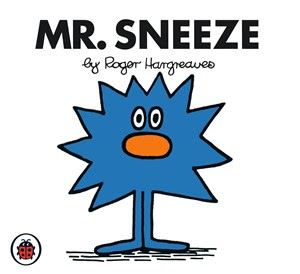 I was all set, this week, to ramp up my creative juices and get cracking with ZoQuNo and what should happen? Well, even I'm not entirely sure, except that I started to feel a bit off-colour on Sunday, to such an extent that even getting out of bed on Monday morning was an ordeal. I think, between Monday and Wednesday, I slept more than I have in the past two weeks and I only ate a quarter of the food. I felt bad - really, really bad. It's now Friday evening as I write this and whilst my sleeping and eating is a bit more on-track, my ears, nose and throat aren't anywhere near. Even Alison decided it wasn't man-flu by Tuesday!


With the few waking hours I've had, apart from spending loads of time with Matthew, I've been reading - two Three Investigator books and "The Complete Making Of Indiana Jones", which I bought with my birthday money. Excellent tome, well worth a read - I reviewed it over at Goodreads.


I have done a little bit of creative stuff, a book trailer for "Life Once Lived" - the publisher is just looking over it now and once he's signed it off, I'll post it up here.


This weekend - assuming I'm feeling better and not evacuating record-breaking levels of (what looks to be the colour of re-animation fluid) snot - I get to be Godfather to Lucy. I have the set now - births, deaths and marriages (I've delivered a eulogy to someone who really shouldn't have needed one for many more years, performed every male-orientated task at a wedding except father of the bride - best man twice) - and I'm really looking forward to it.
Posted by Mark West at 23:39:00 No comments:

And here's another story...

The latest issue of Deadlines e-zine has just gone online and features my story ”A Cottage By The Sea”.

A chilling little tale (which uses as its location a favoured holiday destination of Alison and myself, just down the coast from Caernarvon in Wales), this was originally published in the “Hauntings” anthology in February 2004.

If you get a chance to read it, I hope you like it and, as always, feedback is welcome.
Posted by Mark West at 10:48:00 No comments: