In the second entry of my occasional series highlighting ten of my favourite covers (you can read the Childhood Terrors one here), I thought I'd mark the 120th birthday of Sir Alfred Hitchcock by looking at some of his fantastic anthologies.

As before (and perhaps to explain the eclectic choice), the only rule is that the bulk of the covers must come from my own library.
Edited, as a lot of his anthologies were, by Robert Arthur who went on to create my beloved the Three Investigators series (also using the Hitchcock name).  His credit appears in the acknowledgements - "the editor gratefully acknowledges the invaluable assistance of Robert Arthur".
This is the 1977 Mayflower edition and I wish I could remember now where I bought it from.
Part One (which I don't own) includes Daphne Du Maurier's novelette The Birds.
Edited by Peter Haining, who also compiled one of my favourite childhood books The Restless Bones. 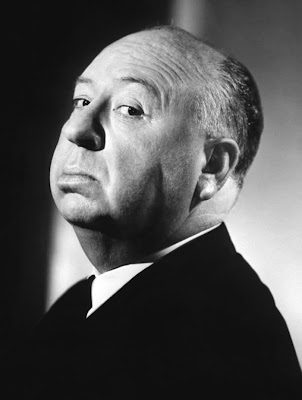 Alfred Joseph Hitchcock was born in Leytonstone, England on August 13, 1899, to William and Emma, the youngest of their three children.  After attending technical school at 15, Hitchcock worked as a draftsman, advertising designer and writer until his interest in photography led to him to London’s nascent film industry.  He started as title card designer and began directing with Number 13 (1922) which was unfinished and is now a lost film.  After making some films in Germany, he came back to London for his first thriller, The Lodger: A Story of the London Fog (1927).

He quickly gained a reputation as a craftsman skilled in delivering suspense (often laced with dark humour) and though he made films in a variety of genres, he specialised in the thriller.  After moving to Hollywood in 1939, he produced his most recognised works and also became a household name with his penchant for self-promotion and a nice line in gallows humour.  He introduced two television anthology series, Alfred Hitchcock Presents (1955 to 1965) and The Alfred Hitchcock Hour (1962 to 1965), directing seventeen episodes of the former and one of the latter and also ‘edited’ a series of popular horror and suspense anthologies.

During his sixty year career, he directed 54 features and pioneered a lot of cinematic techniques that are still applied to film today.  Among these ‘Hitchcockian’ (as they came to be known) touches was the use of the camera to mimic a person’s gaze (making viewers into voyeurs) while critic Murray Pomerance wrote his shots displayed “the full expression of a character's attitude, feeling, knowledge, position, history, and understanding ... in a single brilliant coup”.  By 1960 he’d directed four films often ranked among the greatest of all time: Rear Window (1954), Vertigo (1958), North by Northwest (1959) (which I wrote about here), and Psycho (1960), while in  2012 Vertigo replaced Citizen Kane (1941) as the British Film Institute's best film.

In recognition of his body of work, he won the BAFTA Fellowship Award, the American Film Institute’s Life Achievement Award, the Irving G. Thalberg Memorial Award, the Directors Guild of America's Lifetime Achievement Award and the Golden Globe Cecil B. DeMille Award.  He has two stars on the Hollywood Walk of Fame and, in December 1979, received his knighthood.

Sir Alfred Hitchcock, who married his assistant director and close collaborator Alma Reville in 1926 (they had one daughter, Patricia), died of renal failure on 29th April 1980.

sources:
Wikipedia
The Hitchcock Zone
The Dark Side of Genius, by Donald Spoto
Posted by Mark West at 09:00:00