Thanks to my Australian chum Imelda Evans, I was looking at Annabel Smith’s website recently and noticed she did a regular Top Tens feature.  I thought it was a great idea and decided to adapt it for my own blog but rather than show (for example) my Top Ten Travel Books, I’d skew it slightly differently.  My only rule is that the bulk of the covers must come from my own library.

This first entry looks at books which caused a bit of (gleeful) childhood terror.  I hope you see an old favourite here too…
Published by Puffin in 1967, mine is the 1968 edition.  Alfred Hitchcock had little involvement with the anthologies that bore his name and one of his frequent editors, as is the case here, was Robert Arthur (who created the Three Investigators series) whose credit appears in the acknowledgements - "the editor gratefully acknowledges the invaluable assistance of Robert Arthur".
I have the 1978 edition (as pictured), which I got - along with The Restless Bones - from the Rothwell Juniors Book Club.  A collection of true-life tales, this was my first introduction to the mystery of the Mary Celeste.
A fantastic entry in the long-running series, this 1984 edition features cover art by Peter Archer who also produced the cover for the 'a' and 'b' format Three Investigator paperbacks.  I was lucky enough to meet Mary Danby in 2012 at FantasyCon in Brighton, when Johnny Mains introduced us and she was as lovely as I'd always hoped she would be.
This was originally published by Pan in 1971.
Another true stories collection (though it does look at the likes of Dracula, Jekyll & Hyde and Frankenstein), this takes in historical figures like Vlad the Impaler, Countess Bathory, wolf children, Rasputin and The Elephant Man.  I loved it.  It was re-printed in 1979 as The Hamlyn Book Of Horror.  Daniel Farson, who led a very interesting life, was the grand-nephew of Bram Stoker.
One of my favourite childhood books (I wrote about it before here), this also featured true stories and the last - The Voice In The Graveyard - used to scare the living daylights out of me.  Even now, 40 years later and far removed from the nine-year-old me reading it over the 1978 summer holidays, I can still remember the frisson of fear as a whispering voice pleaded, “…help us…”
More from Daniel Farson and more true stories to terrify nine-year-old me.  Fantastic fun!
More from the wonderful Ms Danby, with another great cover by Peter Archer.
Originally published by Gollancz in 1977, this is another sterling anthology from Peter Haining complete with stories by M. R. James (Lost Hearts), Algernon Blackwood (The Attic), Joan Aiken (The Looking Glass Tree), Robert Bloch (Sweets To The Sweet) and Ray Bradbury (The October Game) amongst others.
Not part of my library unfortunately (I found out about it through 'Dem Bones' at the excellent Vault Of Evil), though I plan to rectify that in the near future not only for the stories but because I love the combination of that incredible cover art with the warning 'These stories are NOT to be read by the very young'. 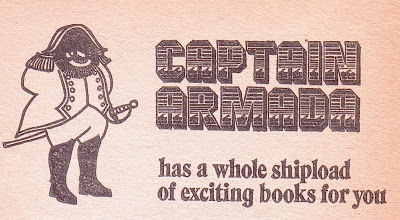