Closer Still, by Richard Farren Barber (a review and Q&A) 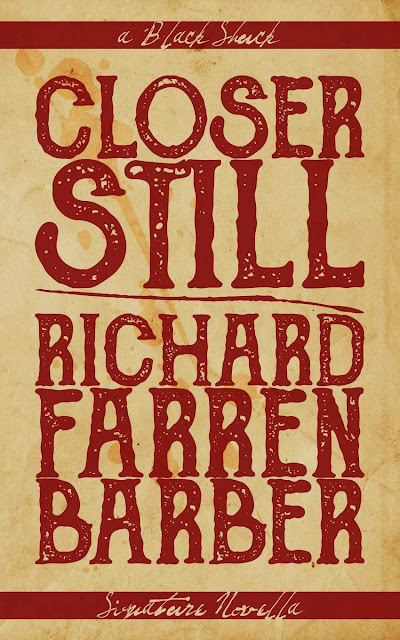 “Closer Still is about childhood friends and childhood enemies. It is a story about how the two are often not as far apart as one might believe. It is my thoughts on the strength of children to navigate an environment in which they are often powerless. It is about love and betrayal. The casual pain inflicted by friends. It is the visceral cry of youth against the injustice of life.”

Rachel is fifteen, burdened with the nickname ‘Kooky’ and seemingly ostracised from a small group of girls she was once part of.  To make matters worse, she’s being haunted by her best friend Katie, who sits or stands quietly in the corner of Rachel’s bedroom.  As time goes on and Katie discovers more powers - she spends a long time trying to roll a pencil over a dresser top - Rachel’s ex-friends begin an insidious campaign of bullying - online and in person - that serve to make Rachel ever more isolated and alone.  She’s cornered in cloak rooms, harassed in corridors and chased down the street, the latter incident videoed to go viral through the school.  Although this brings in the authority figures - parents and teachers - her reluctance to talk and the natural reserve/disdain of a fifteen-year old prevents any kind of breakthrough.  And meanwhile, the bullying gets worse and Katie’s presence becomes ever stronger.

I thoroughly enjoyed Barber’s previous novella Perfect Darkness, Perfect Silence and this is equally as good, if poles apart.  A perfectly paced ghost story that turns up its horror - both real and supernatural - as it goes, this benefits greatly from having Rachel as the narrator (unreliable at times), with Barber capturing her voice exceptionally well.  School life feels real and raw with the sense of being alone in a crowded classroom or playground, the demeanour of the teachers which can be threatening or benign but never fully on your side, the smell of the rooms and corridors, the terror of being trapped in a toilet block.  At home, we see very little of Rachel’s life other than in her bedroom, where parents only occasionally intrude but the spectre of Katie is often there and watching.  The supernatural hand is played well, with Katie appearing early enough that we quickly accept she’s a part of Rachel’s world and as the terror and threat ramp up, she becomes evermore frightening.  The ex-friends are equally well realised and never fully painted to be the villains of the piece.  In lesser hands, ringleader Sarah would be the stereotypical bully but her character is developed to show different sides and angles, while hangers-on Francine and Joanna find themselves in a situation they don’t want to be in but can’t seem to get out of.  As all these lives spiral downwards, it seems that Katie has a plan in mind and when her retribution is unleashed, it’s brisk and harsh and clearly building to a bigger picture.

Exceptionally well written, with a great sense for location and atmosphere, this is a perfectly realised ghost story and I would highly recommend it.

* * *
I enjoyed the story so much, I asked Richard some questions about it and he was gracious enough to answer.
MW:   Can you give me some idea as to where this came from?  And bearing in mind how perfectly the cover title (and quote) work, did that come early in the process or later?


RFB:  The novel was originally going to be a script, and it goes back many years. I started it to submit to the BBC Writers’ Room in 2009. It was called Wallflowers and I still have the original 31 pages of script, and that taught me one thing; writing a script is not the same as writing prose! It’s a whole different technique and skillset (and I have no doubt there are script writers the world over who would read this and roll their eyes) Although I don’t remember actually submitting it, I must have done as I still have the receipt from the BBC.

By 2014, when I came back to the idea and decided that I wanted to write it as a novella, I had the title of Closer Still which came directly from the quote. (Although I had to Google the origin of the quote!).  I did have an idea that Closer Still would be the first of two novellas, with the second called Still Closer, which would tell the story from Katie’s viewpoint, because I think Katie has a lot to say and I have a lot of sympathy for her. I even wrote the start of an outline but I haven't gone back to it yet. Maybe one day...

MW:   You treat the supernatural almost as a normal occurrence in this, with Rachel fully accepting it.  Did you worry about how this would come across (it’s works very well, in my opinion)?

RFB:  One of the things I really like playing with in fiction is casting the supernatural as natural; so in Closer Still Rachel simply accepts that Katie is a ghost and has the usual curiosity about what being dead really feels like.

I’m fascinated by the idea that quite often “stuff” is out in the open and we just don’t know it because we don’t really know to notice it. That idea that the best place to hide things is in plain view. I often wonder what is behind the small door that you walk past every day, why the windows of that house are boarded up.

It’s a subject I’ve come back to with my recent novel The Living and The Lost - where again it starts from the basis that ghosts are a simple fact of life (I do like ghost stories!) and runs with it from there.

I don’t think I really worried about how it would come across, because my idea was that either you’re able to suspend disbelief for the duration of the story or you’re probably reading the wrong genre. Interestingly, I heard Joe Hill talk recently and he said his approach was that if the story had anything unusual or difficult to digest, get it out at the very start because the readers will be more accepting of it.

MW:   Obvious question but I’m intrigued - have you ever had a supernatural experience?

RFB:  I haven’t had a supernatural experience. The closest I’ve come to was going into St Mary’s Close in Edinburgh and having a ghost tour in the semi-darkness. By the end of the tour I was living on the edge of my nerves – the place was genuinely eerie. I found myself at the very back of the group and constantly looking over my shoulder into the darkness. Did I see anything moving behind me? I don’t think so, but I realised that if anyone had put a hand on my shoulder I would have screamed loud enough to wake the dead.

MW:   I loved the school location and found it reminded me a lot of my own.  But since you & I left full-time education during the 80s, how much research did you have to do?

RFB:  Thank you! I’ll confess I didn’t do any research. The school is based on my memories of the schools I attended back in the 80s. In many respects I have an awful memory, but I seem to have a knack for remembering places.  Just the other week I was discussing this with someone and saying I think if I went back to my secondary school now, and if it hadn’t changed, I think I could walk around the site without getting lost. If I close my eyes now I can see whole sections of the corridors. But if you asked me to name who was in my class or almost anything about Chemistry then I wouldn’t have a clue.

MW:   Rachel carries the novella and I found her to exceptionally well realised.  Was writing from her pov (bearing in mind you’re neither female or in your teens) ever daunting?

RFB:  It was definitely a challenge to write a main character where the age and gender were so far removed from my own – and therefore the life experiences and attitudes would be different. It was a deliberate decision to write a piece of fiction from a view point other than middle-aged-white-man. I’m not sure how well it reflects true life, but I tried to tap into that the sense of being an outsider. The feelings of injustice and guilt Rachel is dealing with are relatable to all of us.


You can find Richard online at Twitter here
Posted by Mark West at 09:00:00