I'm pleased to announce that The Goblin Glass, my new e-chapbook from Chad Clark's Darker Worlds Publishing, is now available. 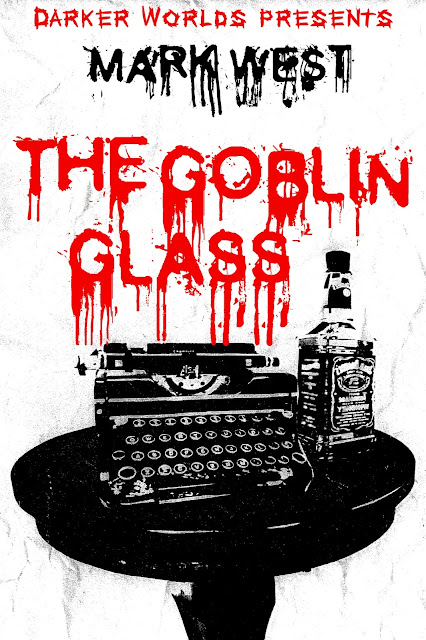 After years of trying to keep his life on the straight and narrow, impossible circumstances have led Warren back to a life of crime. The job he is given is a simple breaking and entering, with instructions to steal a mirror, once belonging to a renowned Spanish magician.

And what should have been simple quickly proves to be anything but. And as Warren is drawn into a nightmarish house with his simple goal in sight, he begins to realize just how much he has put on the line.


This started life in 2015 when Alex Davis approached me to ask if I’d like to be involved in an anthology he was editing, centred around the Ten Commandments.  Giving me a pick of ‘sins’, I chose ‘Thou Shalt Not Steal’ and an idea quickly formed, which I’d beaten into shape by the end of my commute that day.  I pieced the rest together over the next few evening walks, the concept of the mirror (oddly enough) coming to me just before I found the ending and it was a perfect writing experience.  In fact, this was one of those rare occasions where I experienced the process as Stephen King wrote about it in On Writing - "Stories are relics, part of an undiscovered pre-existing world. The writer’s job is to use the tools in his or her toolbox to get as much of each one out of the ground intact as possible.”

Taking place in pretty much one location, an old house on Duncan Street (named from an unpublished novella of mine), it seemed logical to set it in my fictional town of Gaffney (don’t ever visit, it’ll be the death of you).  I mapped out the house, based on some Dude & I saw on a walk, fairly thoroughly in my head because I’m one of those writers who needs to know where the characters are at any one time.  Once I have that locked down, I find it fairly easy to create the environment which, in this case, I needed to be claustrophobic - the protagonist is doing something he doesn’t want to, wrestling his moral compass while becoming ever more frayed by the house itself.

The mirror, that late addition which fuels the story, is homaged from the Three Investigator mystery The Secret Of The Haunted Mirror by M. V. Carey though my nasty tale bears no resemblance - mirror frame aside - to hers).  I love the book and the spookiness of the mirror so I lifted her description of the Chiavo glass (using his name but creating the backstory) intact and it’d be great if a Three Investigator fan read this and decided to seek out her book again.

Alex’s anthology (as sometimes happens) hit some small press turbulence, ended up changing publishers and finally appeared in a handsome hardcover edition with little fanfare (I think five people, other than the contributors, have read the book).  When Chad asked me for a story for his line of Kindle singles, I thought about this dark little tale and decided I’d like to give it another chance.


Then he was introduced to Mr Skinner, another blast from the past.  Back in the day, when Mr Norris ran Gaffney from the back room of the Chequered Heart pub, Skinner was his enforcer, as happy to chat with friends as break their arms if they defaulted on payments.  With Norris long dead, Skinner was now top of the pile and Warren arranged a meeting with him at his pub.  A thug, almost as wide as he was tall, his hair shaved to suede and a livid scar down the left side of his face, showed Warren into a back room.  Mr Skinner sat alone at a table reading a Kindle, his grey hair as well cut as his powder blue suit.  He looked up as Warren approached and smiled.  His teeth were very white.
“Sit,” Skinner said and Warren did.  He couldn’t get comfortable in the well padded chair.  Skinner put down his Kindle, tapped his fingertips together.  “I hear you might be looking for a little job.”
“If you have anything, Mr Skinner.”
“What can you do?”
Warren licked his bottom lip and tried not to look shifty or untrustworthy.  “Anything you want.  Back in the day I did some nicking and hot-wired a few cars.”
Skinner nodded, as if hearing confirmation of what he already knew.  “I understand you ran a decent little workshop for a while, all above board.”
“I did.”
“So why aren’t you there now?”
“The economy,” Warren said after a moment.
Skinner nodded again.  “Uh huh, credit crunch fucked a lot of people over.”  He smiled tightly.  “I might have something for you.”
“Whatever it is, Mr Skinner, I’ll do my best.”
Skinner waved a finger at Warren.  “I remember you now.  Ten, maybe fifteen years ago, when Mr Norris ran the place?  You were in a gang, got out of it just after the bookies raid.”
Warren looked down at his lap.  His fingers were fighting with one another.  “Yes.”
Skinner waved his hand in the direction of the thug and Warren heard him pad away.  He returned a few moments later with a shot glass he put carefully in front of his boss.  Skinner took a sip then wiped his lip with his index fingertip.
“I think we’ll start you with a little breaking and entering, before we perhaps use your mechanics skills.”
“Thank you, Mr Skinner, that’s great.”
Skinner took another sip and wiped his lip again.  He cleared his throat and leaned forward, his elbows on the table.  “Have you ever heard of The Goblin Glass?”


Edited to add:
Interesting end to the day, with a flurry of interest pushing The Goblin Glass up the UK charts for Top 100 Horror Paid Short Stories, reaching the giddy heights of number 2 and stomping past some upstart called Stephen King.  To say I'm chuffed with this would be a huge understatement! 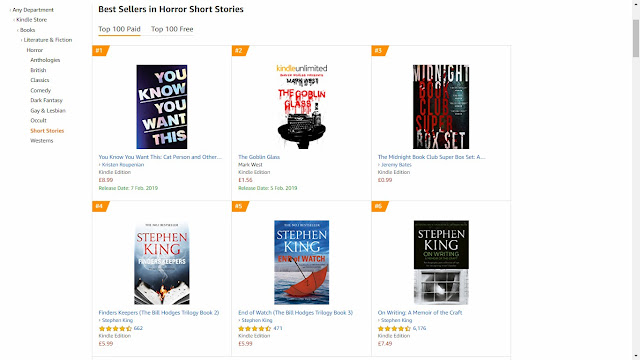 If you're not in the UK, quickly find the book on your local Amazon here