I'm pleased to announce that In Dog We Trust  edited by Anthony Cowin (to raise money for Birmingham Dogs Home) will be published by Black Shuck Books and launched at Edge-Lit 7 on Saturday 14th July.  It contains my short story Chihuahua, a nasty little tale about a dog attack on an out-of-the-way petrol station in the West Country. 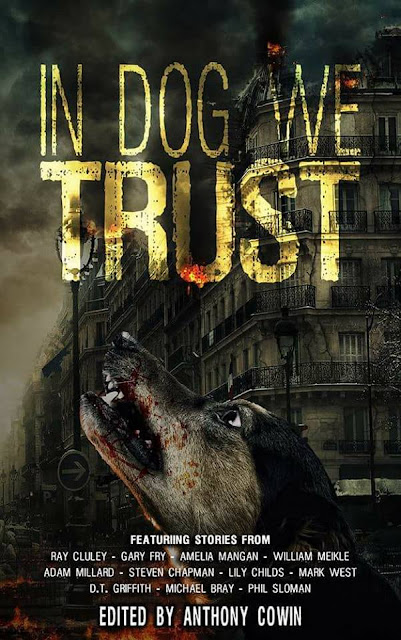 I Love you Mary-Grace, by Amelia Mangan

Leader of the Pack, by Willie Meikle

A Dog Is for Death, by Phil Sloman


I was approached by Anthony in January 2015 and agreed to get involved, though I didn't have the first idea of what to write.  In April, the original publisher Theresa Derwin emailed and copied in the guidelines - reading them again, one line sparked something for me; "And maybe there are pet shops, dog pounds and family homes all on the brink of bloody horror."  What if, I mused, there were people in a building, trapped by the start of the dog problem.  What if they were in a petrol station?  And that was it.  It's taken a while to get here but I'm confident - Steve Shaw is a great publisher and it's a cracking line-up of writers too.

The story has a very small cast.  Ben is travelling to Plymouth from Bristol and long periods in traffic jams mean he needs to refuel.  He pulls over at a run-down independent petrol station next to the town of Trenton (fans of Cujo might like that), where he meets Freddy (the kid behind the counter) and Trisha (who keeps having her card refused by the machine).  When an old couple drive onto the forecourt and a Chihuahua walks across to them, things quickly turn bad.  Very bad indeed.

Although the houses were less than a couple of hundred yards away, [Ben] couldn’t hear anything other than some dogs barking.  At this point in the evening he’d expect to hear lawn mowers or kids playing, perhaps music or the chatter of friends at a barbecue, but there was nothing.  He looked at the shop, which had a row of dumpbins in front of it - firewood, charcoal briquettes, screenwash - and a stand holding two fire extinguishers.  The station seemed to have been lifted whole from the middle of the eighties.  When the pump clicked, he replaced the nozzle and fuel cap, peeled off his gloves and locked the car.
As he walked to the shop he could hear a steady growling from behind it, like a very pissed-off dog was defending his territory.  The growling got louder the closer to the door he got and he was glad to push through it into the air-conditioned interior.
A young woman, in low-cut jeans, a skinny t-shirt and bright pink flip-flops was standing at the counter.  She had long blonde hair that fell to the middle of her back, secured just above her shoulders in a scrunchy.  The kid behind the counter looked even younger, tall and gangly with a shock of curly brown hair and a rash of pimples across his forehead.  He wore an Iron Maiden t-shirt under his ‘Trenton Services’ hoodie.
The shop needed a refit.  The shelving on the central island was old and battered, the items on it priced with little stickers.  The shelves on the wall to his right were filled with maps, newspapers and magazines and no attempt had been made to cover the covers of the top-ones.  Three sun-bleached fridges stood along the back wall, advertising Coke and Pepsi.  Two were filled with drinks, another with milk, sausage rolls and cold cuts of meat.  Ben took out a bottle of water, checked to make sure it was in date and walked to the counter.  The girl seemed to be having trouble with her credit card.
“I swear that’s the pin number.”
"Hey,” said the kid behind the counter, “no problem.”
“There is Freddy, because if this doesn’t work I haven’t got any cash on me.”
“Trish, relax, we can sort it out.”
Ben smiled and wondered how long Freddy had had his crush on Trish and whether she knew.  Trish then favoured Freddy with such a bright, winning smile that Ben knew she was very much aware of it.
Freddy glanced at him.  “Be with you in a minute, mate.”
Trish turned her head and gave him her dazzling smile.  “Sorry, the machine won’t take my card.”
"Don’t worry,” said Ben with a smile.  He leaned against the counter and, in the quiet, thought he could hear the dog barking again.  He wondered if Freddy had it in the back as a security measure.
Movement caught his eye and he looked towards the road as a Volvo pulled onto the forecourt, parking on the other side of the pump that Trish’s KA was parked at.
“If it doesn’t take it this time, I’ll go and get my Dad,” said Freddy, “he might be able to sort it.  He was only nipping out the back to get some fuel oil, I’m supposed to be heading into town.”