Denis was the first single (except in Japan) from Blondie’s second album, Plastic Letters and was released on 18th February 1978.  Recorded at Plaza Sound Studio in New York between June and July 1977, it was written by Neil Levenson and produced by Richard Gottehrer. 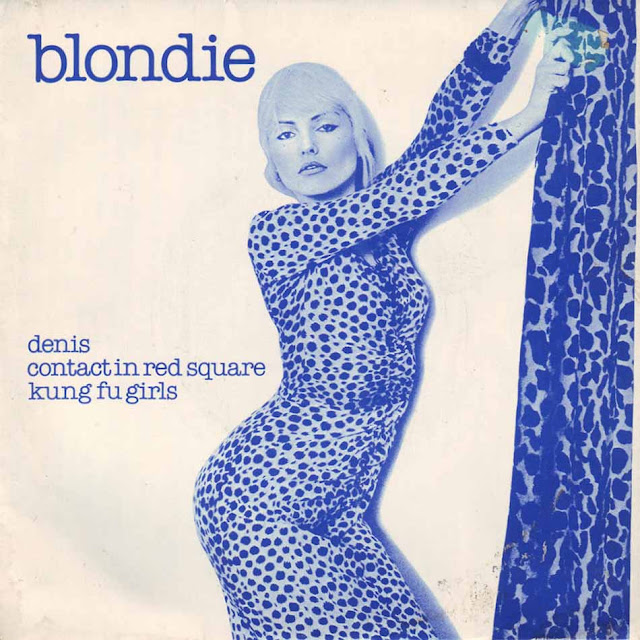 Denis was a cover of the 1963 hit by Randy & The Rainbows, written by Neil Levenson about his childhood friend, Denise Lefrak.  The Blondie version, changing the name and sex, was the single that effectively broke the band into the international market.  It reached number 2 in the UK Top 10 - held off the top spot over four weeks by Kate Bush’s Wuthering Heights and Matchstalk Men And Matchstalk Cats And Dogs by Brian & Michael - staying on the charts for a total of fourteen weeks.  It was number 1 in Belgium and the Netherlands, Top 10 in Germany and Austria and Top 20 in Australia and Sweden.  It was the only single release from the album in the US and never officially charted.

As well as Debbie Harry (vocals), Jimmy Destri (keyboards), Chris Stein (guitar) and Clem Burke (drums), Frank Infante (guitar) and Nigel Harrison (bass) played on the track although they weren’t officially members of the band at the time.

The single was issued in both 7” and 12” formats and they shared the same b-sides - Contact in Red Square (Destri) from Plastic Letters and Kung-Fu Girls (Destri/Harry/Gary Valentine) from Blondie (their debut album).  Plastic Letters was Gottehrer's second and final album with the band and recorded under their original label - Private Stock Records - but picked up by Chrysalis Records for release.  Chrysalis' main office was in England and they understood the international potential for the band, promoting the album and singles extensively throughout Europe and Asia, the plan being to develop overseas markets before the US one.  It was a ploy that ended up working very well.
As well as changing the gender and singing from a different viewpoint, the song also includes a section where Debbie Harry sings in French.  As Richard Gottehrer wrote in the liner notes for the 2001 re-issue, “Her phrasing aside, it felt great and sounded amazing.  When Chrysalis took over, I was asked by Terry Ellis [the boss] to go back and re-record the French section with a proper translation.  We tried, but there was just too much magic in the mix, so Denis was released as-is.”  This second version was released as a bonus track on the 1994 re-issue of the album.

The video, though it’s a performance piece and you do occasionally see the other members of the band, focuses heavily on Debbie Harry and she looks fantastic - perfect make-up, that hair, the look, a tuxedo and a swimsuit.  My crush had begun…