In January 1977, the first cut of Star Wars was completed and George Lucas began to work on the soundtrack.  He wanted to record it in Dolby Stereo, a mid-70s innovation that neither the studios nor the cinemas were too keen on as the equipment was expensive and not always reliable, but he was adamant.  He wanted the best possible format for the film, to showcase the score and the sound design (all of which had to be created, since the sets were wood, the blasters shot blanks and the robots didn't make much noise at all), especially since he had expert craftsmen on hand creating them.

So for the twelth and final entry in the Star Wars At 40 thread, I'm taking a look at the work of Ben Burtt and John Williams.
For the sound design, producer Gary Kurtz had spoken to Ken Mura (Lucas’ former instructor at USC) before production began, asking if there were “any sound geniuses” there.  Mura said one, Ben Burtt, was just about to graduate and he was hired, sight unseen and instructed to begin creating sounds.  He didn’t meet Lucas until six months later and they only had one conversation about the concept - Lucas didn’t want the background noise to sound like it had been manufactured in a recording studio.  He felt electronic, synthesised soundtracks had become a sci-fi cliché - “the sounds of the real world are complicated and kind of dirty,” Burtt said, “they simply cannot be reproduced on a synthesiser.” 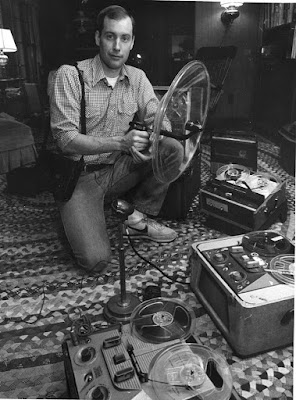 Armed with his trusty Nagra tape recorder, he began gathering sounds after breaking the effects into different categories - voices, weapons, vehicles and doors (as well as introducing the Wilhelm scream) - taking his inspiration from the world around him.  He recorded his blender, fridge, stereo turntable, movie projectors, jet engines and animals at the zoo.

Darth Vader’s breathing came from Burtt recording himself using an old Dacor scuba regulator while R2-D2 was a mixture of his own voice, synthesised and spliced together with flexible pipe being squeezed and metal scraps rolling around in dry ice.  He also ‘voiced’ some of the squawks made by the holographic monsters on the Millennium Falcon.  Knowing that made-up languages would quickly sound fake, he used real - if little known - ones as often as possible - Greedo, for instance, speaks the Inca dialect of Quecha.

The lightsaber sound came from an old projector at USC, where the interlock motor made a humming sound as it idled.  “It would slowly change in pitch and beat against another motor and they would harmonize with each other.”  Then he passed a microphone by a television set picture tube (this was long before flat screens) and that created an unusual hum as it picked up the transmission signal and induced it into its sound reproducing mechanism.  “It was a great buzzing,” he said, “so I recorded that and combined with the projector motor sound and that became the basic lightsaber tone.”  To create the sense of it moving, he re-played the hum and waved another microphone in the air next to the speaker, creating “a Doppler’s shift, where you get a pitch shift in the sound [that] gives a sense of movement.”

The distinctive roar of the TIE fighters came from two different sources.  George Lucas had seen a British documentary, The Battle of Stalingrad, that featured some strange sounding Nazi rockets, which he suggested might sound good as the blasters.  Burtt recorded the sound but needed something else and decided to blend it with a recording he’d made at the zoo of an elephant shrieking.  Slowed down and changed in pitch, the combination worked perfectly.  The blaster effect eventually came from Burtt hitting the guy wire of a radio tower with a hammer.

Benjamin ‘Ben’ Burtt, Jr., was born in Jamesville, New York on 12th July 1948 and graduated from Allegheny College in Pennsylvania.  He won the National Student Film Festival in 1970 with a war film called Vape God and won a scholarship to the University of Southern California (USC) in Los Angeles, where he earned a Master’s degree in film production.

Following Star Wars, for which he won a Special Achievement for Sound Effects Editing Oscar in 1978, he has created sound for a lot of big films (including almost every Lucasfilm production to date), often working through Skywalker Sound.  In addition, he has directed several IMAX documentaries (such as Blue Planet, Destiny In Space and Special Effects: Anything Can Happen), wrote several episodes of the 1980s Star Wars cartoon series Droids and edited the Star Wars prequels and Red Tails (2012).  He made cameo appearances in Return Of The Jedi (as the Imperial Officer Han Solo knocks over a balcony in the shield generator on Endor) and The Phantom Menace.

To date, Burtt has won four Oscars for Sound Effects Editing - Star Wars (1977), Raiders Of The Lost Ark (1981), E.T.: The Extra Terrestrial (1982) and Indiana Jones And The Last Crusade (1989) while being nominated for a further six.  He was awarded a Doctor Of Art by Allegheny College in 2004 and The Charles S. Swartz Award by The Hollywood Post Alliance for contributions to the field of post production.


Although orchestral scores had declined in popularity in the 70s (partly due, ironically enough, to Lucas’ American Graffiti which started the trend of filling the soundtrack with old songs), he knew that was the way he wanted to go with Star Wars.  “I was looking for a composer who could write in the classic Hollywood style of the '30s and '40s,” he said in interview.  His close friend Steven Spielberg gave him a recommendation.  “He said ‘John [Williams is] the man for you, he’s fantastic’ though I was a little nervous at first because I only knew him primarily as a jazz guy.”

In a 1976 interview, Lucas said, “I told him ‘I’m basically doing a silent movie and I need to have the discipline of the way silent movie-music was written’.”  Since “about 90 percent of the film is music”, Lucas and Williams agreed on a classic 19-century style with liberal use of leitmotif (wherein a character is given a recurring theme) since the music “had to serve as an ‘emotional anchor’ for the audience to relate”.

The classically trained Williams knew exactly what Lucas was looking for and delivered a lush, grand score that is instantly thrilling (and the power of the Main Title Theme as that Star Destroyer flies overhead - wow, I saw it as a 9 year old and it stuck with me), taking cues from Richard Strauss and Golden Age Hollywood composers Max Steiner and Erich Wolfgang Korngold.  There are also a few elements from Psycho too.  When Paul Hirsch was editing the sequence as Luke, Ben, Han & Chewie “pop out of the hatch in the Falcon, I laid in a very famous piece of Psycho music there [on the work print],” he said in interview, “the same three-note motif that Scorsese had insisted Benny [Bernard Herrmann] use in Taxi Driver.  Curiously enough, Johnny [Williams] - I don't know if he did it deliberately or what - but it's now incorporated into his cue for that moment in the film."

John Towner Williams was born on 8th February 1932 in Floral Park, New York and his father Johnny Williams was a jazz percussionist who played with the Raymond Scott Quintet.  The family moved to Los Angeles in 1948 and John studied at the University of Californa before being drafted into the US Air Force in 1952, where he conducted and arranged music for The U.S. Air Force Band.  In 1955, following his service, Williams entered The Juilliard School where he studied piano with Rosina Lhévinne and worked as a jazz pianist in many of New York’s jazz clubs.  After his studies, he moved back to Los Angeles and worked as a session musician for the likes of Henry Mancini (on the Peter Gunn soundtrack), Franz Waxman, Bernard Hermann, Alfred Newman, Jerry Goldsmith and Elmer Bernstein.

His first film composition was for Daddy-O (1958), his first credit Because They’re Young (1960) and he quickly gained attention in Hollywood for his versatility, equally at ease with jazz, piano or symphonic music.  He won his first Oscar for Fiddler On The Roof (1971) and his stature increased during the early 70s as he composed scores for big budget disaster movies like The Poseidon Adventure (1972), The Towering Inferno and Earthquake (both 1974).  His score for Jaws (his second film with Steven Spielberg) is still extremely well known (and used to indicate approaching danger) and won Williams his second Oscar.

His work on Star Wars earned him his third Oscar and it remains the highest grossing soundtrack recording of all time.  He continued to work with Lucasfilm (scoring the Indiana Jones quartet, as well as The Empire Strikes Back, Return Of The Jedi, the prequel trilogy and The Force Awakens) and has scored all but two of Steven Spielberg’s films (the director was quoted as saying he considers it “a privilege to call John my friend”). 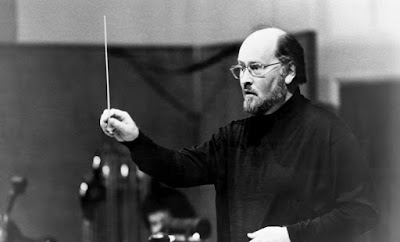 Williams has written well over 100 film and TV soundtracks (a third of them through the 70s), released more than 140 albums (including soundtracks) and over 30 concerto pieces (for a full list, go here).  From 1980 to 1993 he was the Principal Conductor of the Boston Pops Orchestra (he’s now their laureate conductor) and created the theme music for the 1984 Summer Olympics in Los Angeles as well as the 1988, 1996 and 2002 Games.

To date, Williams has won 5 Oscars, while being nominated for a further 50 (only Walt Disney has more nominations).  He’s been nominated for 6 Emmy Awards (winning 3), 25 Golden Globes (winning 4), 65 Grammy’s (winning 22) and won 7 BAFTAs.  The American Film Institute selected the Star Wars soundtrack as “the greatest American film score of all time” (his scores for ET and Jaws also feature in the top 20, at 6 and 14 respectively) and it was preserved by the Library of Congress into the National Recording Registry, for being “culturally, historically, or aesthetically significant.”  He was inducted into the Hollywood Bowl’s Hall of Fame in 2000, was a recipient of the Kennedy Center Honours in 2004, received the National Medal of Arts in 2009 and was presented the AFI Life Achievement Award in 2016 (the first composer to receive it).

Because I can't discuss John Williams and Star Wars without hearing the music, here is the man himself conducting the Boston Pops in the early 1980s.

This snippet, showing Ben Burtt and John Williams in conversation, is taken from From Star Wars To Jedi: The Making Of A Saga which was a VHS release in 1983 to help promote Return Of The Jedi.