The Living Daylights, at 30

The Living Daylights, the fifteenth James Bond film in the official EON series, opened in the UK on 30th June 1987 (following its premiere on the 27th).  It was directed by John Glen (the fourth in his eventual five-film run), produced by Albert R. 'Cubby' Broccoli & Michael G. Wilson and written by Richard Maibaum & Michael G. Wilson.  Peter Lamont was the production designer, John Richardson supervised the visual effects and John Barry wrote the score. In Autumn 1985, as scriptwriters Michael G. Wilson and Richard Maibaum began work on the new James Bond film, Roger Moore confirmed he wouldn’t be returning to the lead role (a lot of the criticism directed at A View To A Kill had centred around his age - he was 57 when he made it).  Producer Cubby Broccoli, his stepson and co-producer Wilson and daughter Barbara (promoted to assistant producer) therefore had to find a new Bond and also decide what direction to move the series in.

Early plans were to make a prequel.  A screenplay, going back to Bond’s roots, was written that Broccoli liked but felt wasn’t right - “no-one would be interested in a younger Bond,” he said at the time, “they wanted what they were used to, just bigger and better.”  He did, however, like the re-introduction of the Soviet assassination section SMERSH (featured prominently in the novels Casino Royale and From Russia With Love) and the concept of Smert Shpionam ('Death to Spies').  This tied in with the short story The Living Daylights (wherein Bond acts as a sniper to protect a Soviet defector), which was originally published in the first issue of The Sunday Times Magazine in February 1962.  Building around that (it forms the first 15 minutes or so of the film), Maibaum and Wilson created the rest and, in keeping with changing public opinion, made Bond less of a womaniser than he was before.  As they wrote, the search for the new Bond began in 1986.

Sam Neill was screen-tested and though he impressed Wilson, director John Glen and Barbara Broccoli, Cubby passed, keen to pursue Welsh-born Timothy Dalton.  He’d originally been considered in the 60s, when Sean Connery left though he turned down the part in On Her Majesty’s Secret Service (1969) as he thought he was too young.  He tested again before Live And Let Die (1973) and, with Roger Moore being indecisive, For Your Eyes Only (1981) and was well liked but unavailable, now in America making Brenda Starr (1989).  The next option was Pierce Brosnan, who Cubby had met on the set of For Your Eyes Only, when he joined his wife Cassandra Harris and Broccoli for lunch (she played Countess Lisl in the film).  In the meantime, Brosnan had landed the lead role in the TV series Remington Steele which, in 1986, had just been cancelled by NBC.  After a three-day screen test, Brosnan was offered the role but news of EON’s interest in the actor prompted NBC to renew the show and Brosnan, under contract, had no choice but to finish the last series (as it was, only six episodes were made before it was cancelled for good) - he was “devastated” but, as history has shown, he would get another chance further down the line.  Cubby’s wife Dana suggested trying Dalton again, as the actor had now finished filming and was available.  A fan of the novels, Dalton accepted the role after Cubby assured him the new film would take the character back to the style of the early Connery era.  The official announcement was made on 6th August 1986.
Maryam D’Abo became the new Bond girl, playing Czech cellist Kara Milovy.  She had previously auditioned for Pola Ivanova in A View To A Kill (Fiona Fullerton got the part) and impressed Barbara Broccoli, who suggested she audition for the new role.  Dutch actor Jeroen Krabbe was cast as General Koskov, Joe Don Baker as Brad Whitaker (he would later appear as CIA agent Jack Wade in the Brosnan Bonds) and former dancer Andreas Wisniewski as Necros.  The KGB general set up by Koskov was originally going to be General Gogol (a recurring character through the Roger Moore-era) though Walter Gotell (who played him) was too ill to handle the major role and, instead, appears briefly at the end of the film (his last appearance in the Bond series).  A new character, Leonid Pushkin, was created and played by John Rhys-Davies.

With the new, much-younger Bond, Lois Maxwell didn’t return as Miss Moneypenny (after being in every film in the series to date), replaced by Caroline Bliss.  Desmond Llewellyn did return as Q and this was the first film since Goldfinger (1964) to have Bond’s equipment briefing take place within Q Branch. 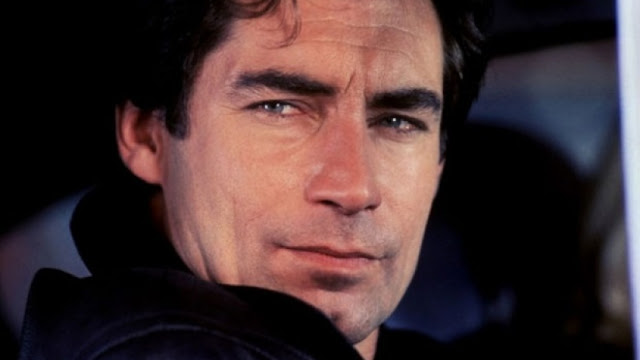 Principal photography began on 17th September 1986 on the Rock of Gibraltar for the pre-credits sequence.  The Land Rover was filmed on the same short stretch of road, which was MoD property and not open to the public, though it went airborne at Beachy Head in the UK.  Sky divers B. J. Worth and Jake Lombard (who’d worked on the series since Moonraker (1979)) undertook the parachute jump at Gibraltar and the C-130 Hercules used in the sequence, marked as a Royal Air Force plane, actually belonged to the Spanish Air Force - it was later used in the Afghanistan sequences with Russian markings.  Dalton made a good impression on the crew during the two weeks it took to film the sequence, eager to be as physically involved in the stunts as possible - it is often quite clearly him and not a stuntman clinging onto the Land Rover.
Production moved to Pinewood Studios on 29th September to film the fight scene, over three days, as Necros infiltrates Bladen’s Safe House before relocating to Stonor House, which provided the exteriors.  When the production moved to Vienna, in early October, a press conference was held introducing the world press to Timothy Dalton as the new Bond (and his discomfort at the attention is clear to see on the DVD documentary).  Location filming in Vienna took in the Cape Deme, the Reisenaad Big Wheel in Prater Park (as used in The Third Man (1950)) and the Musikverein concert hall.
Setting up in Tangier, Morocco in late October, Brad Whitaker’s house was a combination of the Forbes Museum of Tangier as well as his Palais Mendoub.  At the start of November, work began at Ouarzazate, Morocco, for the desert fight scenes (including an impressive foreground miniature for the bridge sequence) and the Soviet Air Base.  The model unit, under John Richardson, also filmed there alongside the first unit.  At the same time, in the US, B. J. Worth and his team were filming the aerial sequences with the C-130, including Worth and Lombard hanging on a bag at the plane’s open cargo door.

Production returned to Pinewood at the end of November and on 11th December, while filming the Q Branch scenes, there was a royal visit.  Prince Charles fired the rocket from the ghetto blaster, while in a staged photo call, Princess Diana hit him over the head with a sugar-glass bottle (an act apparently instigated by Jeroen Krabbe). The C-130 fight sequence was filmed at the studio with the actors then, in mid-January, the crew shot the Aston Martin sequences in Austria.  Filming completed on 13th February.
The Living Daylights was the last Bond film to be scored by John Barry (who also makes a brief cameo, as a conductor).  Following the success with Duran Duran co-writing A View To A Kill, Barry collaborated on the title song with Pål Waaktaar of A-Ha.  The collaboration wasn’t harmonious, with the band and Barry not seeing eye-to-eye and he later described the working relationship as like “playing ping pong with four balls.”  The song, whilst not as successful as Duran Duran’s, reached number 5 in the UK charts and due to differences of opinion, the band’s preferred mix appears on their 1988 album Stay On These Roads.  However, in a 2006 interview, Waaktaar said, “I loved the stuff he added to the track, I mean it gave it this really cool string arrangement. That's when for me it started to sound like a Bond thing".

This was the first Bond film to feature a different song, If There Was A Man by The Pretenders, over the closing credits and they also contributed the song Where Has Everybody Gone, heard through Necros’ Walkman in the film.

There is a lot of classical music in the film - none of which is included on the soundtrack album - including Mozart's 40th Symphony in G minor (1st movement),  Alexander Borodin's String Quartet in D major, the finale to Act II of Mozart's The Marriage of Figaro, Dvořák's cello concerto in B minor and Tchaikovsky's Rococo Variations. 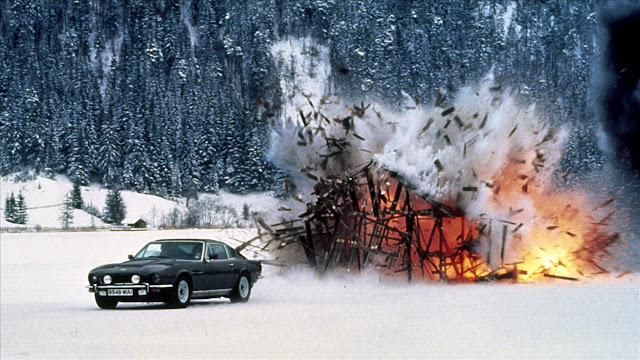 The Living Daylights premiered at the Odeon, Leicester Square on 27th June 1987 attended by the Prince and Princess Of Wales before going on general release on 30th June.  As this was the 25th anniversary year for the Bond series, a TV Special - Happy Anniversary 007 - was produced as part of the promotional campaign.

The villains in the film repeatedly use vehicles and packages marked with the Red Cross, which angered a number of the societies who wrote letters of protest.  The British Red Cross attempted to prosecute the filmmakers and distributors but no legal action was taken, though a disclaimer was later added to the film.

The film was generally well received critically, mostly for bringing back a sense of realism and espionage to the series, though some - such as Roger Ebert - commented on the lack of humour.  It took $11.1m in its opening weekend in the US (more than doubling the take of The Lost Boys, released on the same day) and went on to gross $191.2m worldwide.

I like the film a lot - Dalton made a good Bond, they cut back on the one-liners (the funniest moment is where Kara is desperate to retrieve her cello but Bond is adamant they don’t have time - we then cut to him waiting for her) and the action is more vicious and dynamic.  Having said that, there is the whole cello case sequence which apparently took three days to shoot - John Glen came up with it and only convinced the others by sitting in a cello case himself to prove it would work.  I still don’t think it does.

The Living Daylights proved to be the last Bond film to use an original Ian Fleming title until Casino Royale (another reboot) was released in 2006.