I discovered a channel called Talking Pictures (343 on Sky, 81 on FreeView) when I found they were showing Terminus (1961), the John Schlesinger documentary about Waterloo Station that I’ve wanted to see for ages but had never come across before (and it was as wonderful as I'd hoped).

Flicking through their listings, I found loads of great little shorts (public information films, documentary pieces and other oddments) as well as wide array of films, from the 30s up to the 80s - serious stuff, weird stuff, comedy, drama, horror and thrillers plus a good helping of sleaze.  I taped Alfred Hitchcock’s Murder! (1930), The Beast Must Die! (1974), The Demon (1981), The Shillingbury Blowers (1980) as well as some other titles that weren’t, how shall I put it, as good as I’d expected them to be (such as Can You Keep It Up For A Week? (1975), featuring a pre-Bond, pre-Boba Fett Jeremy Bulloch).

A couple of weeks back, they showed a film called The Beach Girls (1982), which the write-up called a ‘coming of age’ story.  As I love coming-of-age stories, I decided to give it a go and I’m glad I did. 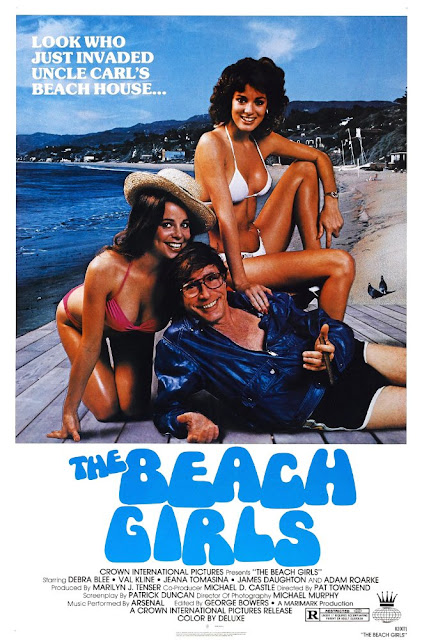 I have known my best friend Nick (who I wrote about here) for forty years this year and it’s fair to say we’ve been through a lot together, weathering some storms and having a real laugh too.  We’re quite different people but sync together very well and although our sense of humour is often poles apart, we agree on enough to become annoying to those around us at times.  He lives in Bristol now and we don’t see anywhere near enough of each other but he was up staying at ours and we’d been chatting and neither of us wanted to end the evening, so I suggested we watch a film.  He asked what I had, I told him about The Beach Girls and we both agreed it might be fun (he & I came of age in the 80s, as video recorders made inroads into people’s homes and video shops sprang up all over the country, letting us see those films - Porky’s, Lemon Popsicle and the like - that we’d heard about but never had a chance to see).

So that’s how Nick & I, at close to midnight one evening, came to watch The Beach Girls.

The plot, such as it is, is very straightforward.  Shy and virginal Sarah (the exceptionally pretty Debra Blee) has been invited to stay at her Uncle Carl’s (Adam Roarke) beach house for the summer.  When she’s joined by her more worldly-wise friends Ginger (Val Kline) and Ducky (Jeana Tomasina), they convince her to throw a big party, ordering items (like beer and pizza) to get attractive delivery drivers to turn up.  Very soon, the neighbours are complaining, Uncle Carl turns up to see what's going on (and ends up getting seduced) and a smuggler, trying to bring in some marijuana, gets raided by the campest coast guard you've ever seen in your life.  The girls find the smugglers dumped cargo, invite everyone to another party and that's it, as Sarah comes out of her shell (“She’ll untie her hair and shake it out,” I said to Nick and he nodded in agreement, saying “And then she’ll get together with him”) and falls for hitchhiker Scott (James Daughton).
I wouldn’t want to give the impression that The Beach Girls is a good film but it is good fun (and, in its own way, quite sweet).  The direction is perfunctory at best, though it looks beautiful with the hazy Californian sunshine, the music is cheesy and repetitive (“is that the same song as the opening credits?”) and I can only assume the boom operator was the directors son, since the microphone spends a lot of time dropping into the shot.  Maybe my perception was clouded watching it with Nick and we both experienced a nostalgic blast back to the 80s (I could almost hear that toploader VHS whirring away) but I enjoyed it - yes it was groan-worthy in places, yes we talked at the characters, yes we each correctly guessed what would happen next at certain times, but we did laugh.  A lot.

In a nice turn-up, this is a sex comedy told from the female point-of-view (even if it's clearly made by a bunch of blokes) and although there are quite a lot of bare boobs, there’s a parity with the bare bums on display.  Running along with the main plot, there are lots of weird little visual gags that shouldn't work but are often so stupid and out of place that they do - a dog steals girls bikini tops (which I’m sure I remember from another film), a man treasure-hunting with a metal detector injures passersby and a random bloke pops up and shouts “Food fight!” as the camera pans over to people fighting, whilst dressed as food.  Uncle Carl’s gardener (Bert Rosario), who never seems to leave the beach house, suffers various (almost silent-movie-esque) pitfalls that see him increasingly injured before he somehow gets caught up in a fight with a chauffeur (George Cheung).  One of my favourite jokes was right near the beginning - the first person called to the house is a pizza boy and Ducky hugs him, then says, “Is that a salami in your pocket or are you just glad to see me?”  “Oh,” says the dopey delivery driver as he reaches between them, “it’s a salami” and he pulls it out to make his point.

The director, Bud Townsend (credited as Pat here) only made nine films in a fifteen-year career but the writer, Patrick Sheane Duncan, went on to better things including Courage Under Fire (1996), while Phil Grove, credited with additional material (probably all the jokes on the beach), only wrote one produced screenplay, for Cavegirl (1985).

Some of the cast were recognisable and, according to the imdb, most of them popped up in various TV shows during the 70s and 80s.  Adam Roarke was a counter-culture actor, perhaps best known for Dirty Mary Crazy Larry (1974) Bert Rosario was a TV regular and George Cheung, who was Rambo’s nemesis in Rambo: First Blood Part II (1985), has worked consistently since (his imdb profile is a huge list).  James Daughton, who was Hitchhiker Scott, appeared in Animal House (1978), one of the neighbours was Mary Jo Catlett, who was Pearl on Diff’rent Strokes and Champagne Girl (it’ll make sense if you watch the trailer) was Corinne Bohrer who’s been in loads of stuff, though I recognised her from the Police Academy 4.
Our three leads didn't fare so well.  Debra Blee only made five more films (all sounding like enjoyable trash) and hasn’t been seen on-screen since 1987, while Jeana Tomasina (or Jeane Keough), a Playboy Playmate from 1980, was in four ZZ-Top videos (Sharp Dressed Man, Legs, Gimme All Your Lovin and Sleeping Bag) and last seen in a reality TV show.  The Beach Girls is Val Kline’s only credit.

Like I said, I don’t want to give the impression that this is art because it isn’t - I might have spent longer researching and writing this blog-post than the writers did on the script - but that is almost part of its charm.  As Nick & I chuckled over it, I said to him on more than one occasion, "somebody got paid to write this" and he pointed out people got paid to work on it too.  A fun watch (helped, I'm convinced, by our shared memories of watching those VHS tapes back in the day), why not find a mate with a similar sense of humour, record this and enjoy 90 minutes of dopey, early-80s silliness.

Now I need to figure out what to record for when Nick comes up next time!

The definitiely-not-safe-for-work (you've been warned) trailer...