The Eighth Annual Westies - review of the year 2016 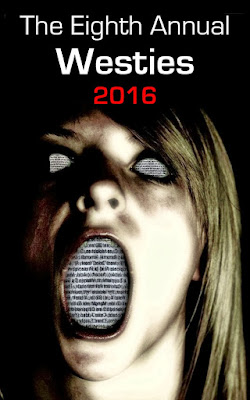 Well it's that time already (another year having zipped by) and so, as we gear up for Christmas, it's time to indulge in the blog custom and remember the good books read in 2016.

Once again, it's been a great reading year for me with a nice mixture of brand new novels, a few books that have been languishing on my TBR pile for too long and some good finds on the behind-the-scenes film front.  This year has also seen my reading matter shift slightly as I explored the market of psychological thrillers and that, on the whole, has been very satisfying.

As with previous years, the top 20 places were very hard fought but, I think, show a nice variety.  I blogged about some of the titles (not too many this year as I found it really difficult to review a thriller successfully without giving away plot twists) and have linked to them in this list.

So without further ado, I present the Eighth Annual Westies Award - “My Best Fiction Reads Of The Year” - and the top 20 looks like this:

1: The Kind Worth Killing, by Peter Swanson
2: 13 Minutes, by Sarah Pinborough
3: In A Dark Dark Wood, by Ruth Ware
4: The Lie, by C. L. Taylor
5: Just For The Holidays (*), by Sue Moorcroft
6: Strangers, by Paul Finch
7: Laudanum Nights, by Stephen Bacon
8: Craze, by Steve Byrne
9: Paper Doll, by Robert B. Parker
10: Albion Fay, by Mark Morris
11: Promised Land, by Robert B. Parker
12: The Pauper Prince and the Eucalyptus Jinn, by Usman T. Malik
13: The Grieving Stones, by Gary McMahon
14: Paupers' Graves, by James Everington
15: Becoming David, by Phil Sloman
16: Keep You Close, by Lucie Whitehouse
17: The Sister, by Louise Jenson
18: Buried In A Book, by Lucy Arlington
19: What They Find In The Woods, by Gary Fry
20: The Night Lingers And Other Stories, by Nicola Monaghan

* = This is Sue's second book of her Avon contract (I read it to critique) which will be published in May 2017.  Her current release, The Christmas Promise, was number 5 in last years chart.

Of the 66 books, the breakdown is thus: