Today on the blog sees Alex Davis, organiser of the wonderful Edge-Lit conventions and publisher of Boo Books, contribute a guest post. 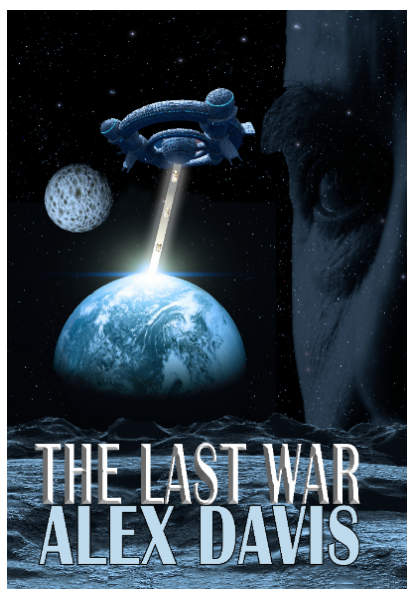 As the epic that has been the July Blogswap Trail draws towards a close, it's time for another extract from The Last War, which I hope is reasonably epic in its own right... Here we're getting a bit deeper into the story – Chapter Eleven to be precise – where the proverbial is about to hit the fan, and the flames of conflict are just springing to life...

'I have no intention of harming your temple, Re'Nuck. I have come to harm you.'

Apius can feel his own face grow pale, the threat of violence meted by Asha this morning about to come to an unlikely conclusion. He can feel his body tense, but does now know if it is in readiness to run or fight back. How would he even fight back? The wooden rake may not be much of a weapon, but it is more than he can bring to bear. He tries to stutter a reply of some kind as Asha mounts the steps to the altar itself. One of his braver followers, a man he cannot name, leaps up behind Asha and tries to launch a crude attack of his own. Apius never finds out what his intention was, because she turns quickly and lashes out the rake. The clash sends shivers through the Re'Nuck, and the would-be attacker falls by the wayside, knocked silly by the force and hatred behind the blow.

'Do something, brothers and sisters! Take this despoiler away!' Apius finally wrenches from his throat, but the words bring no action. Asha turns to the timid flock, knowing they will do nothing. Many are still transfixed by the prone form lying on the floor, a livid bruise rising on the face. They have never seen an act of violence before, and Asha finds herself delighted by their fear. With a wolfish smile, she says, 'I suggest you leave now. This is between me and your precious leader.'

Apius dives to the floor, as though the altar can offer him some protection. There are only one way out of the temple, and the front door is blocked by Asha's coiled form – and Apius can hardly believe the sight of his followers leaving him behind! They are afraid, he tries to tell himself, they have no experience of such things. They must be forgiven. I will forgive them. If I survive this, he adds morbidly.

She continues her climb of the stairs to the altar, amused at the sight of the Re'Nuck cowering without the strength of numbers to fall back on.

'It is no use trying to hide, Re'Nuck. You would give yourself more honour in facing me.'

Apius gathers all his courage to stand before the feral, aggressive spirit of the Noukari given flesh. Swathed in mud, ready to explode into violence, Asha makes a sight to chill the strongest of their number.

'Thank you, Re'Nuck. At least now you may die with some dignity. Your death will mean the death of your religion, and all the darkness it brings.'

'Animexianism will survive. Someone will step into my place.'

'From among your loyal followers? Those who fled at the first risk to themselves? They are unwilling to put themselves in the line of danger for their precious gods.'

'You speak of darkness, but you are about to commit the darkest of all acts.'

'Do not moralize with me, Apius. My act is the lesser of two darknesses. I have no doubt of that.'


For more information, Alex can be found online here