Thrilled to announce that the latest anthology edited by Dean M. Drinkel, "Phobophobias", is available this Halloween from Western Legends Press.  Even better, for me, is that it contains my story "Rhytiphobia". 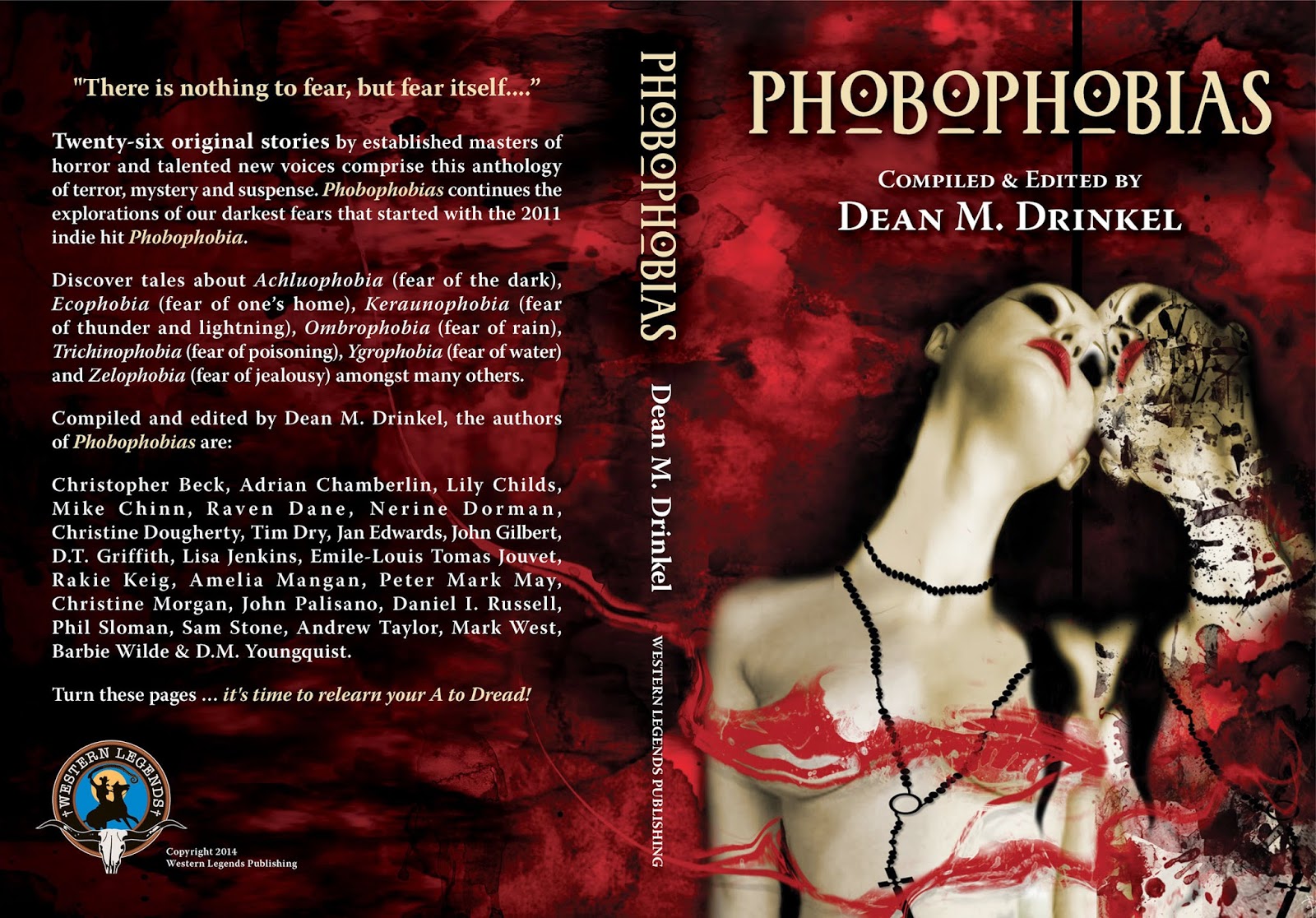 “There is nothing to fear, but fear itself….”

Twenty-six original stories by established masters of horror and talented new voices comprise this anthology of terror, mystery and suspense. Phobophobias continues the explorations of our darkest fears that started with the 2011 indie hit Phobophobia.

Compiled and edited by Dean M. Drinkel, the authors of Phobophobias are:

As I mentioned, I'm represented by my story "Rhytiphobia" (fear of wrinkles) which follows Cameron Davis and his extreme reaction to less than supple skin - born from a terrifyingly close encounter with a mad old neighbour who enjoyed licking boys faces.

The woman came out of the hedge at him.  Her face was a map of wrinkles, her eyes dull and pale, her mouth open wide and showing only gums.  Cameron yelled and tried to scramble backwards but the old crone grasped his wrist in one bony hand.
“Caught you,” she said and pulled.  Cameron was taken by surprise and, with momentum on her side, he was pulled into her garden.
He sprawled onto the brown, patchy lawn and rolled quickly onto his front so that he could get up on all fours.  The old woman faced him, leaning forwards, her legs spread wide apart.  Her green skirt was old and holed and he could see the outline of her thighs through them.  They looked like matches.
“Stealing my daffs again were you?"
Cameron glanced around.  Apart from the lawn, which was clearly on its last legs, there was no other plant life in the garden.  Some pots stood by the back door but whatever was in them had long since died.
He looked from her to the gap in the hedge.  His friends were through there, probably pissing themselves with laughter that he’d been caught.  It was the stuff of legend, that if you lost your ball in Mrs Taylor’s garden, you’d never get it back.  He’d thought he could challenge it but now wished he hadn’t bothered.  “I just came to get our ball back.”
“Ball?” shrieked the woman, “Cameron Davis, you’re a liar!”
“It’s true.”
It was the first week of the summer holiday and he and his friends had decided on a game of footy on the green.  But the ball had sailed into Mrs Taylor’s garden from his mis-kick and now here he was, sixteen years old and on all fours in her garden, staring up at his hideous woman who must have been ninety if she was a day.
“Liar,” she said, “you want me daffs.”

Thanks to Dean, I'm proud to be included in such great company.

The book is available from Amazon here.  If you decide to take a chance on it, I hope you enjoy it.
Posted by Mark West at 09:00:00