In general, I like the idea of Kickstarter and I've contributed to a few causes in the past - the last being the successful Morph one - and here's another I'm supporting, which has less than three days to go.

As a kid, in an experience shared by many of my horror loving friends, myr first experience of this wonderful genre was finding old Pan paperbacks on Dad's bookshelves and looking at the cheerfully gruesome covers, daring myself to read what lay inside.  As the years went by, I moved on to Stephen King and Clive Barker et al and left the Pan books behind, though I did pick up the revamp of the series that Stephen Jones and David Sutton edited.

My friend Johnny Mains is an authority on the Pan series and he's set up a Kickstarter fund to create the "Pan Book Of Horror Stories Scrapbook".  He's passionate about the subject and a dogged and determined researcher, so I'm convinced he'll do an excellent job of this. 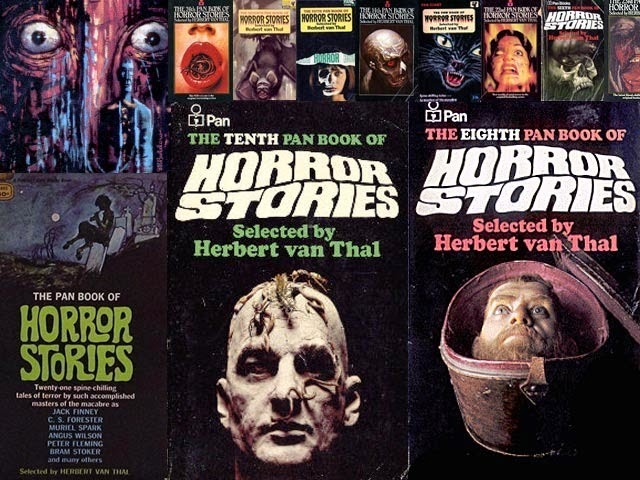 A complete history of The Pan Book of Horror Stories, the infamous anthology series which ran from 1959-1989.

THE PAN BOOK OF HORROR STORIES SCRAPBOOK will be the result of 5 years in-depth research into this series which has haunted and thrilled me since I was thirteen years old.

The funds collected for this book will be put towards the following things:
* There is still some more research needed and people to interview
* Getting a high quality artist to do the book cover and illustrations.
* Paying for a professional proof reader.
* High-res scanning of artwork, photos, letters etc.

Printing of the actual books which will be to the highest standards available.

The cult of the Pan Horrors continues to fascinate, more than 55 years after they were first published and 25 years after the last volume hit the shelves. This book aims to publish the definitive history of the series, its editors, its authors - with as much information and paperwork that I've been able to gather together since 2009.

I've still got a lot of work to do on it, so have given myself the publication date of December 2015. It's a bit of a wait, but I'm working on this on my own, and have a full time job plus editing the Best British Horror series for Salt Publishing.

I'm the only person I know of bonkers enough to attempt a book such as this, and the main reason I want to do it is so I can be the first person to read it!

This will be a book for any fan of horror, its authors, the history of publishing, social history in a wider context and how a gentleman called Herbert van Thal created a series of books which has been ingrained into the national psyche.

If you'd like to support the project, all the details can be found on the Kickstarter site here


ADDENDUM:
The project was fully funded on the evening of Thursday 17th July, though Johnny has said that all additional funds will go into making the final book "even better!"  This is, clearly, great news.
Posted by Mark West at 09:00:00