As you may or may not know, I'm a big fan of behind-the-scenes stuff to do with films.  I love special effects, I love make-up effects, I'm constantly amazed at the artistry of ILM and Derek Meddings et al and I will watch a film if I know that Rick Baker has designed or created the make-ups for it.

One of my fascinations is matte paintings and with some of the best in the business - names like H Ellenshaw, Albert Whitlock, Les Bowie, Matthew Yuricich - you often didn't even realise you were watching something that literally wasn't really there.

Matte paintings are created on large sheets of glass - usually in oils or pastels - in order to integrate live-action footage (actors, some backgrounds, maybe traffic) into an environment that would be too expensive or dangerous to build, film on or visit.

The first known matte painting used in a film was for “Missions Of California” in 1907, where Norman Dawn (ASC) improvised the crumbling California Missions by painting them on glass.  Matte’s were used extensively for “The Wizard Of Oz” (especially in the approach to the Emerald City), throughout “Citizen Kane” (for Xanadu, obviously, but also in lots of little tricks shots too), most of Hitchcock’s work, throughout “Raiders Of The Lost Ark” but most especially in the final shot (a superb Michael Pangrazio painting) and - one of my favourites - the bottomless tractor beam in “Star Wars” that Obi-wan Kenobi negotiates around.

By the mid-80s, computer programmes were advanced enough to allow matte paintings to be created in the digital realm (something which ILM whole-heartedly embraced).  The first digital matte shot was the stained-glass window knight from “Young Sherlock Holmes” in 1985, painted by Chris Evans (using Lucasfilm’s Pixar system, which would later be sold on to Steve Jobs and create “Toy Story”).

A matte painting can make a scene great (you don't often get poor ones but when you do, they're immediately apparent) and the best ones are those you don't even realise are there.  Here are some of my favourites.

"The Birds" attack Bodega Bay, from Alfred Hitchcock's fantastic film.
The painting is by Albert Whitlock The final shot, of the government warehouse, in "Raiders Of The Lost Ark".
The painting is by Michael Pangrazio, the live-action element is the man with the crate and a bit of the walkway

Slave 1 at Bespin, from "The Empire Strikes Back", painted by Harrison Ellenshaw
There are too many great Star Wars matte paintings to list them all - click this Google search to have a look

The Pan Am clipper from "Raiders Of The Lost Ark" - even though the plane is real, it looks more of a fake in the (admittedly poor quality) screen cap on the right
Painting by Alan Maley 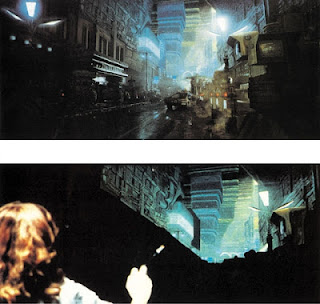 The tractor beam sequence from "Star Wars"
painting by Harrison Ellenshaw, credited as P. S. Ellenshaw (he was working for Disney at the time)

What brought all this on was a link I saw today, to two articles, listing the 50 greatest matte paintings ever.  Click the link and enjoy the art.
Posted by Mark West at 11:18:00