No more tours for INXS

I'm an INXS subscriber and received an email today, a press release that's also posted on their site (which you can read here in full).  Basically, they're not going to tour any more, which I suppose means - taking into account the word retirement - that they're splitting up.

“We understand that this must come as a blow to everybody, but all things must eventually come toan end. We have been performing as a band for 35 years, it’s time to step away from the touringarena”


“Our music will of course live on and we will always be a part of that.”


“We would like to express our heartfelt thanks to all the friends and family that have supported us
throughout our extensive career. Our lives have been enriched by having you all as a part of the
journey.”
As regular readers of this blog will know, I'm a massive INXS fan and have been since accompanying an ex-girlfriend to their 'Summer XS' gig at Wembley stadium, in 1991.  I saw them again, with Alison, at DeMontfort Hall in Leicester as part of the 'Get Of Out The House' tour (this blog post is kind-of about that), then at the NEC in 1997, as they supported 'Elegantly Wasted'.  After Hutchence's death, we saw them again - at the NEC - with Jon Stevens on vocals and whilst it wasn't a bad concert, it didn't really work for me.  I avoided the whole Rockstar thing and the album 'Switch' (though Alison likes it a lot) and we saw them last year, at the Clapham Common gig (see here).

There was also a link on their Twitter feed to a Rolling Stone article from 1988, when they were in the prime as the mighty KICK album was just starting to take over the world and it makes great reading (here's the link).  Reading that brought home the fact that, for me, the true INXS sound ends with the suicide of Michael Hutchence and it's been 15 years since he departed.  Having said that, they're a great live act and their gigs were always worth going to, so it's a real shame.


“It’s been 35 years for INXS as a live touring band and unbelievably it’s been 15 years ago since welost Michael” said Jon Farriss.
“We lived for each other in the trenches and we loved each other. It was the six of us against theworld and then suddenly and inexplicably we were but five. We were lost right at the moment wewere on top.”
As Jon Farriss says, “INXS’ touring days could never last forever. We wanted it to end on a high. And it has.” 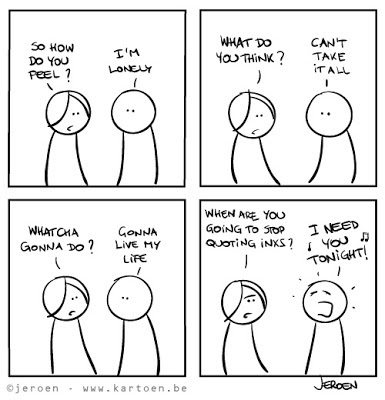 Thanks for everything, boys, for the pleasure you've given me and millions of others over the years and rest assured that I'll be listening to your music for a long time to come.