Note:
It’s my opinion that the “Later” experience (for both the short story and the short film) is made all the better by not knowing what’s coming, by letting the piece of work guide you and confound you and move you without prior knowledge. To that end, this review/essay won’t give you a blow-by-blow plot breakdown but there might be minor spoilers within. You’ve been warned! 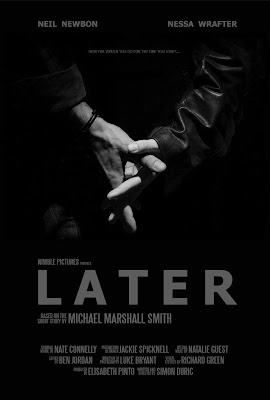 Sometime in 1996, in a Stephen Jones themed anthology (I won’t tell you the name of it, since it sort of gives the game away), I read a short story called “Later” by Michael Marshall Smith. At that point, I hadn’t read anything by him and when I got to the last line, I was amazed and moved and astonished at how much power that story packed (for those interested, it’s reprinted in all its glory in Smith’s 1999 collection from Harper Collins, “What You Make It”). I became an instant fan and continue to tell as many people as will listen just how good it is - I even homaged (well, alright, stole) the beautiful “Later…” line in my own novel five years later.

Fifteen years on and I’m in Brighton, attending the British Fantasy Society’s FantasyCon, held the weekend that September rolls into October. Martin Roberts, an old friend, has organised the film shows for the event and, knowing of my love for the story, tells me that he’s secured a screening of a short film version. I didn’t even realise one was being made.

Slight dilemma. I read quite a lot and, on occasion, I’ve read a book or story before it’s been made into a film and, in general, the viewing pleasure is often a bit of a let-down (and sometimes it’s a lot of a let-down). Dare I risk going to see this? How could they capture the feelings and emotions that the story had raised in me? How could they make it as powerful as the story was? Only one way to find out.

On Saturday evening, at 9pm, I gathered up a little band of mates - who’d I been regaling for the past hour about how good the story was - and we went into the screening. Martin introduced it, the lights went down and the film started. At 9.20pm, I left the screening room on my own and felt the need to get a breath of fresh air. You see, the film did work. Not quite in the same way as the story had, but it did enthral me, it did raise powerful emotions in me and it was upsetting in parts. I went back to find my friends and spent the remainder of the weekend telling everyone who’d listen that the short film of “Later” was very, very good indeed.

- warning, here may be spoilers -

According to the Nimble Pictures website (the production entity behind this mini-masterpiece) “Later” is the story of Richard and Rachel, a young couple who are deeply in love. Their life together is torn apart when, on the way to a party, Rachel is killed in a tragic accident. Unable to cope with the idea that he’s now alone, Richard decides that death doesn’t have to be the end of everything. 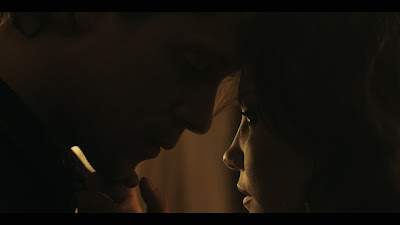 By their very nature, many low-budget films (especially short ones) are acting rather than action driven and so they stand and fall on performance. In the case of “Later”, they picked superbly well as the acting is top notch. Neil Newbon plays Richard and appears in virtually every shot, doing most of his acting with expression - he conveys enough emotion that the audience not only sympathises with him but empathises too. Equally at ease whether still - reflecting in the car at the beginning - or caught amid violent movement - earlier in the car or much later, with spade in hand - he’s never less than watchable. As Rachel, Nessa Wrafter arguably has the more difficult role - with much less screentime, she has to make her character memorable enough for us to believe in what Richard does and she achieves this admirably. Her Rachel is beautiful and smart and loving and so when she does get hurt, we feel Richard’s pain because we want her to live. We want them to be together. And that, essentially, is the crux of the whole film. 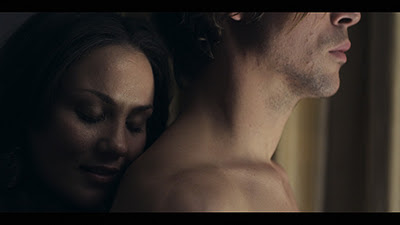 Rachel & Richard, in the bedroom

It’d be difficult to pick a “best” scene, with regards to the performances, but since tying a tie is very important in the short story, I’ll go with that one. Getting ready for the party, Richard can’t knot his tie and is getting frustrated when Rachel comes into the bedroom, clad in a towel. Whilst kissing him, we’re aware of movement and she steps back - having knotted the tie perfectly - says her “later…” line and things move forward. In that sequence, we know as much as we need to about the characters, we understand them (hell, we’ve even been them at some point) and the actors play off each other perfectly. There’s also a nice little visual trick, a beautifully observed moment where the camera pans across Rachel’s upper arm and focuses on the beads of water that have escaped the towel. 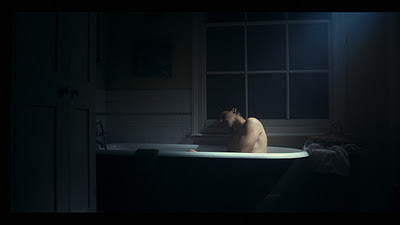 The cinematography, by Luke Bryant, is gorgeous with a lovely muted palete and - in the couple sequences at least - a real warmth to the image that you don’t often find with DV (it was shot using a RED HD camera). The music - by Nate Connelly - is nicely understated but insistent and the editing, by Ben Jordan, keeps everything moving nicely. Often, with low budget films, the editing is where things have a tendency to fall down (shots linger too long, or are cut too quicky) but Jordan and Duric seem to know precisely how long everything should remain on screen for.

Again, without wanting to throw in too many spoilers, there’s only one major make-up effect - by Natalie Guest - but it’s so shocking to see it that (in the screening I attended, at least) it drew a gasp. A prosthetic piece, it adds a real sense of poignancy to a scene that’s already difficult enough to watch. According to the director, he kept the actors apart when the scene was shot, so that Neil wouldn’t know how Nessa would look, making his reaction all the more believeable. And it does work, his stunned and wordless expression an extension of the audiences own.

Pulling all of this together is writer & director Simon Duric and he’s done a superb job, in both adapting the short story and making it work so well and so movingly as a film.

Simon started out in the small press, getting his break with Andy Cox at TTA Press (a role Andy has performed for a lot of those writers and artists amongst us - in my case, his zine “The Fix” opened up a whole new world in 1999) and was nominated for Best Artist in the 2001 British Fantasy Society awards. Finding work as a storyboard artist, he got in touch with Michael Marshall Smith “and I cheekily asked him if he'd be willing to let me try and adapt one of his short stories into a short film. He asked which one, I said LATER.” Writing his first draft overnight, Smith liked it enough to let Simon carry on and the film was eventually shot over four days (though it’s so polished, it certainly doesn’t look like it).

At present, the film is on the festival circuit, premiering in 2011 at the Fantastik Film Festival in Lund, Sweden and it was also invited to the Sitges Film Festival in Barcelona (where it was nominated for a Melies D'argent award). Beyond that, who knows? With the market for short films being what it is - anyone remember Channel Four’s “Shooting Gallery” strand, which sadly appears to have bitten the dust - there are no plans for “Later” other than being a terrific calling card for all involved.

Personally, I think the film deserves a bigger audience and I hope this little review/essay has inspired you enough to want to watch it. Maybe if you're reading this and are interested in seeing it, you could perhaps email Nimble Pictures at info@nimblepictures.co.uk and show your support.
(Interesestingly, they also have “Dark Hollow” in development, based on the Brian Keene novel, with a screenplay from my friend Paul Finch to be directed by Paul Campion, ie, the writer and director behind “The Devil’s Rock”).

And just to finish on a high - how about Rachel’s line? The line that made the short for me and is delivered so wonderfully by Nessa Wrafter in the film? Here it is, in it’s entirety:

“Later,” she said, smiling in a way that showed she meant it. “Later, and for a long time, my man.”

Track this film down, it’s well worth a look and very highly recommended.


ADDENDUM (May 2014) - Thanks to Michael Marshall Smith for pointing this out to me - the film can now be watched at his website on this link - http://www.michaelmarshallsmith.com/new-page-1/


(I'd like to thank Elisabeth Pinto, the producer of the film and owner of Nimble Pictures, who graciously passed my "well done!" email on to Simon Duric.  I'd also like to thank Simon for both answering my email and his patience and good humour with my questions and queries thereafter )

all photographs are (c) Nimble Pictures, used with permission
Posted by Mark West at 13:52:00