Okay, this is where I am now:

* Chris has signed off on the last of the illustrations for the “Tourniquet Heart” pdf, which is good.
* My diary is now up to date
* My afterword for “What We Do Sometimes, Without Thinking” is now completed (and might just make an appearance here, once the story is published)
* I have caught up on all of my critiquing

My slate is now clear, therefore, leaving me free to crack on with my lost film novella and I’m keen - I’ve been itching to get to it for a while, bits of the story are dropping into place every day and I think it could be pretty powerful. We’ll have to see. Anyway, that’s next up.

* * *
In other news, I showed Dude my Snowspeeder model yesterday (for those who don’t know, the Snowspeeder is the Rebel ship that fought the AT-AT’s in “The Empire Strikes Back”. He was so taken with it, we went up into the loft and found all the old bits and bobs I had from back in the mid-to-late 90s, when the re-issues brought a new wave of merchandise. I still have two original 1978 figures - Han Solo (with a small head) and a Death Watch Commander, but they remain on the top shelf of a bookcase, safely out of reach.

Dude said, “I love these, but we can still share them if you want, Daddy.” 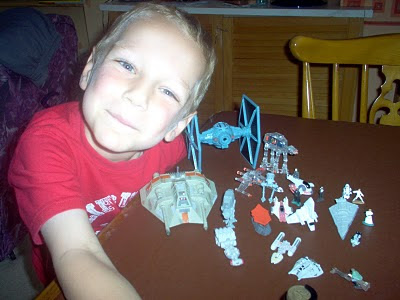