Back in November 2020, I blogged about the photo-stories I used to produce (which you can read here).  As well as writing and directing those, I was also one of those annoying "hey, let's put on a play!" kids and, for two summers with friends, forty years ago, I did just that.
The Ragsdale Street Players (we weren't actually called that but, with hindsight and since we lived there, we really should have been) was formed by me and my friend Claire Gibson (who had been in my class during junior school), along with my sister, Tracy and Claire's sister, Caroline.

Our first play, The Evil Of Dr Frankenstein, was performed in the Gibson's back garden during summer 1981.  My friend Nick was going to play the monster but, at the last moment, wasn't able to so he was replaced by a cardboard box robot (as I recall) who thankfully didn't have any lines.  The play was successful with its audience (friends, neighbours and relatives who weren't told what was happening when they were invited over) and I loved it.

After that, I read a book (Graphic Violence On The Screen, by Thomas R. Atkins, which I still have in my library) that included a picture of Warren Beatty and Faye Dunaway in Bonnie And Clyde (1967).  I was really taken with it, got other books out of the library about the duo and decided that would be the basis for the 1982 play.

Everyone agreed, I did the research and Claire & I began writing the script on 3rd August (I only know this because 1982 was the first year I kept a diary).  Later entries record us rehearsing (though not every day) and the "for one night only" performance was Wednesday 11th August (we rehearsed morning and afternoon that day).  My diary entry reads:

"The play went down quite well and lots of people came.
We raised £3.40 for the church tower appeal fund"

Smith & Jones, our play, was in two acts and we even had a singalong in the interval - Steve Corton could play the keyboard and knew the tune to We Are The Champions, which helped because Claire had the lyrics in her Smash Hits and we wrote them on boards for the audience to see.

We took the funds to the church the next day and that, I thought, was going to be it - the play had done well, I basked in the glory, that was us done for another year.  Except, on the Friday, I got a phone call from the local Evening Telegraph and dutifully recorded it in my diary:


"This morning, a lady from the Evening Telegraph phoned me up to say that Canon Cox had contacted them to tell them how much we raised etc.  She is sending a photographer at 2.30pm.  He came earlier and took 5 scenes [I presume I meant poses] but 20 shots.  There were two men."

The picture appeared in the Monday 16th August edition, 40 years ago.  I'm wearing my Indiana Jones fedora (bought the previous summer in Great Yarmouth), Steve is wearing my dad's St John's ambulance hat and we're all holding toy guns.  And seriously, how fantastic is that?
The Ragsdale Street Players (I really wish I'd thought to tell the reporter from the ET that) bowed out at the top of their game and Smith & Jones proved to be our final show.  I can't remember much at all of the play, or the performance, but looking at that grainy photograph from the paper always makes me smile.  Claire and Caroline are both still doing very well, you'll be pleased to hear and I went on to appear in several Youth Club pantomimes with Claire as we moved into our teens.  I haven't done much acting since then but, on occasion, I've been known to write the odd thing or two...
Posted by Mark West at 09:00:00 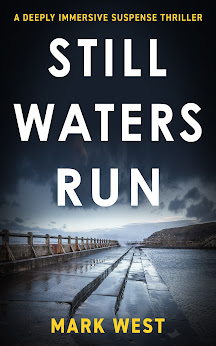