Visions Of Ruin, from NewCon Press

I am pleased to announce my forthcoming horror novella, Visions Of Ruin, is now available for pre-order at the NewCon Press website. It will be published on March 30th 2022. 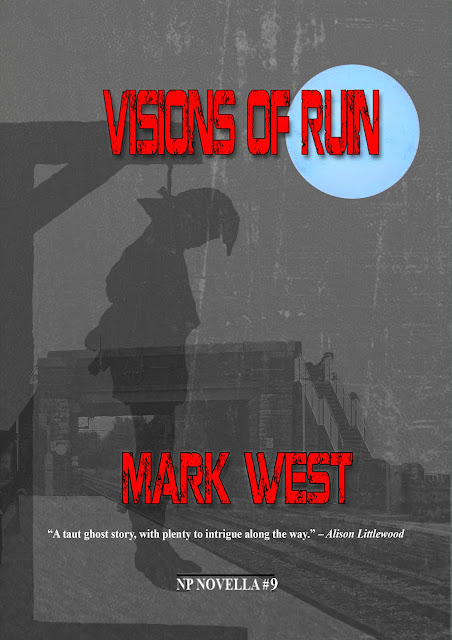 A week in a seedy caravan at 'The Good Times Holiday Park' is not exactly the holiday sixteen-year-old Sam has been dreaming of, but he knows his mum is struggling and doing the best she can. At least he meets someone his own age to hang out with – Polly – but neither of them is prepared for the strangeness that ensues.
Beautifully paced and full of deft touches that bring the 1980s setting to life, Visions of Ruin is set during a rainy weekend at a caravan park on the edge of rundown seaside town.
I wrote the novella last year, after finishing Jenny Was A Friend Of Mine (coming very soon from The Books Folks, as I wrote about here) and I'm really proud of it. Combining two of my apparent obsessions - the 80s and rundown British east coast seaside resorts - this mixes quiet supernatural horror (which, I hope, is chilling) along with hints of a teenage romance.
“A taut ghost story that transported me back to the 80s, with plenty to intrigue and unsettle along the way. A pleasure to read, with a terrifically neat ending.”
– Alison Littlewood
Visions Of Ruin is available in paperback and Limited Edition signed hardback and can be ordered directly from the NewCon Press website.
£9.99 (Paperback)
£19.99 (Signed Hardback, LTD ED)
Click here for pre-order details.
Visions Of Ruin is also available as one quarter of the NewCon Novella Bundle 3, along with stories by Stephen Deas, Stewart Hotston and Ida Keogh. More details here.
Thanks to Ian Whates for both asking for and then enjoying the story enough to want to publish it, Nick Duncan for sharing all those adventures with me on the east coast in the 80s, Teika Marija Smits who helped push me to start and, as always, David Roberts for the Friday Night Walks and the mammoth plotting sessions.
Posted by Mark West at 12:00:00