Born Standing Up, by Steve Martin (a review)

In a new edition of the occasional series, I want to tell you about a book I've read and loved, which I think adds to the genre (autobiography, in this case) and that I think you'll enjoy if you're a fan (though if you were a fan, you'd probably read this long before now...) 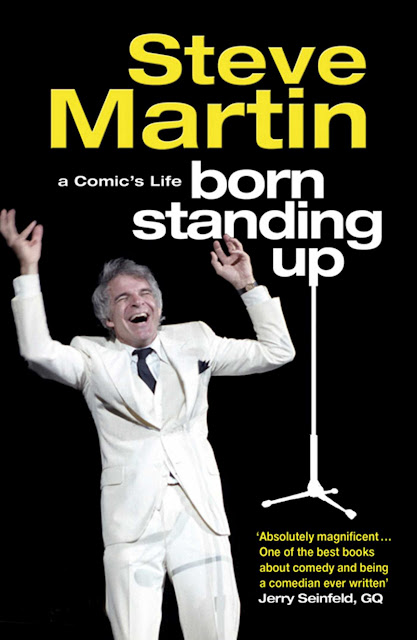 Steve Martin has been an international star for over thirty years. Here, for the first time, he looks back to the beginning of his career and charmingly evokes the young man he once was.

Born in Texas but raised in California, Steve was seduced early by the comedy shows that played on the radio when the family travelled back and forth to visit relatives. When Disneyland opened just a couple of miles away from home, an enchanted Steve was given his first chance to learn magic and entertain an audience. He describes how he noted the reaction to each joke in a ledger - 'big laugh' or 'quiet' - and assiduously studied the acts of colleagues, stealing jokes when needed. With superb detail, Steve recreates the world of small, dark clubs and the fear and exhilaration of standing in the spotlight. While a philosophy student at UCLA, he worked hard at local clubs honing his comedy and slowly attracting a following until he was picked up to write for TV. From here on, Steve Martin became an acclaimed comedian, packing out venues nationwide. One night, however, he noticed empty seats and realised he had 'reached the top of the rollercoaster'.

BORN STANDING UP is a funny and riveting chronicle of how Steve Martin became the comedy genius we now know and is also a fascinating portrait of an era.

I'll start this with the confession that I missed Steve Martin's stand-up - the golden period of Saturday Night Live and his groundbreaking shows came before I was able to either see or properly understand them.  Delving back into memory, I think I was first aware of him from The Jerk and The Man With Two Brains, two films that really tickled me at the time and continue to do so. The former was probably on BBC2 one night, the latter featured Kathleen Turner and following her turns in Romancing The Stone and Body Heat, she was a major crush of mine in the early 80s, who led me to a lot of interesting films.

Having read Wild & Crazy Guys by Nick DeSemlyn (ostensibly about SNL it also features quite a bit on Martin), I decided to pick up his autobiography and I'm really pleased I did.  A slim volume, it charts his early life in the 40s and 50s, in a home dominated by a father generous in everything but his affection.  Martin escapes as soon as he can in the 60s, first to Disneyland where he works in the magic shop and learns the craft and then to San Francisco, where he starts performing.  His act slowly develops as he sticks to his guns and goes against the grain (he writes his stand-up was “10 years spent learning, 4 years spent refining, and 4 years spent in wild success”), finally hitting the big time in the mid-70s.  Around his burgeoning career, he was also in right place at the right time for a lot of things, from his girlfriends (he dated Mitzi Trumbo and was invited to dinners with her dad Dalton) to his comedy friends, while being part of (but slightly removed from) the zeitgeist.

Told with a lovely dry wit and a searing honesty, this is a cracking book, not only revealing Mr Martin as painfully shy but also a genuinely nice bloke, while proving how tough comedy can be (he tapes his acts, then reviews and analyses them in depth to work out what got laughs and what didn’t).  His decision to stop stand-up in 1981 and move into films is explained and the book pretty much ends there, which really made me eager for volume 2 of the biography (which, as of writing this, hasn’t appeared).  He does, however, complete the story to date (the book was published in 2007) explaining the situation with his family, which is both heart-warming (with his sister) and made me well-up (his parents).

Interesting, intriguing, funny and sad, this is the perfect autobiography and I’d highly recommend it.