Author Self-Coaching (part 2): What Happened Next, by Sue Moorcroft

Following up from her guest post a fortnight ago (which you can read here), I'm more than happy to hand the blog over to Sue Moorcroft once again.
A couple of people have asked what happened after I struggled past the crossroads in my writing career (as I wrote about before) where I felt I was spending too much time on things that didn’t make me happy or earn money. To catch you up: I sent what I thought was a hopelessly optimistic email to Carole Blake of Blake Friedmann Literary, TV and Screen Agency, who introduced me to the fab Juliet Pickering of the same agency. Juliet had an eye out for an author of commercial fiction. I won’t pretend that you don’t need these strokes of good fortune.

I met Juliet in London for lunch and we got on well. I was transparent about what I wanted, which was a publisher who would get behind me and get my books into supermarkets. She was equally transparent that that was her job but she couldn’t issue any guarantees. She asked about ideas for future books and I gave her three. She told me which she’d feel most confident in presenting to publishers and I had that happy feeling you get when something clicks into place. It was the one I most wanted to write. It was an idea that I’d already received a green light on from my old publisher, but they’d wanted a novella. I thought the idea had enough meat for a novel.

Disappointingly, Juliet didn’t agree to represent me. She asked me to write the book first. The snag with that was by the time I’d spent a year on the book my old publisher would be expecting it. It would be … awkward. I asked if I could send Juliet the traditional three-chapters and outline instead. Would she make a decision at that point? She agreed. She told me later she’d already made up her mind to offer to represent me but wanted to go through the process in the right way.

Takeaways from this meeting: honesty and transparency on both sides. Accepting the commercial realities of publishing. Listening to what was on offer. Putting forward alternatives. Taking disappointment on the chin because, let’s face it, a writer’s life is full of it.
Telling my old publishers that I was working with an agent effectively changed our relationship because they didn’t work with agents. They would continue to publish my backlist; inevitably, they’d concentrate on their front list authors.

I wrote the first few chapters of what became The Christmas Promise. I roughed out a few other things I thought would happen - more of a vision than an outline. Juliet offered to represent me and formalities were quickly concluded. Delighted, all I had to do was write the rest of the book, continuing to write short stories and run workshops for income to add to royalties from backlist titles. A note here: relaunching my career eventuated in a distinct dip in income for about two years. To have a spouse with a steady income and supportive attitude helped a lot. I also got the opportunity to convert my writing guide, Love Writing, into an online course. That helped too.

After I sent the novel to Juliet, the editing process began. And it was rigorous. I think I did three structural edits, influenced by comments from other people in the agency who read the book too. For anyone who thinks of editing as someone interfering or instructing, I should point out that a process like this is something likely to happen to any book in any publishing house. I think of this as writing the best book I can. I listen. I negotiate. I talk through.

Takeaways from this process: this is not for wimps. It feels like a lot of structural work yet, in the end, the changes are fairly subtle. The book is a lot better. I probably didn’t known as much as I thought I did. My agent is on my side.

When the book went out to editors we got a lot of interest, only one flat ‘no’ and some meetings to go to. As an aside, just to let you know how character building the process was, some major interest led nowhere because the editor was going on maternity leave and guess who was coming from another publishing house to cover? The one person who’d given the flat ‘no’. But I wouldn’t want an editor who wasn’t wowed by my writing, so I was philosophical.

The exciting day dawned and I turned up in London for meetings. The first was with Avon Books UK, HarperCollins. Once again, everything clicked. We got on well, we shared similar visions. Another stroke of good fortune: a slot for an author who would write a winter book and a summer book had opened up on their list, just as my agent rocked up with a winter book and a summer book! The winter book was ready and the summer book not so that played into there being a longer dip in income than might otherwise have been the case but still, outside I said to my agent, ‘I think it’s going to be Avon.’ I never wavered from that and Juliet got down to terms with them for a two-book contract. 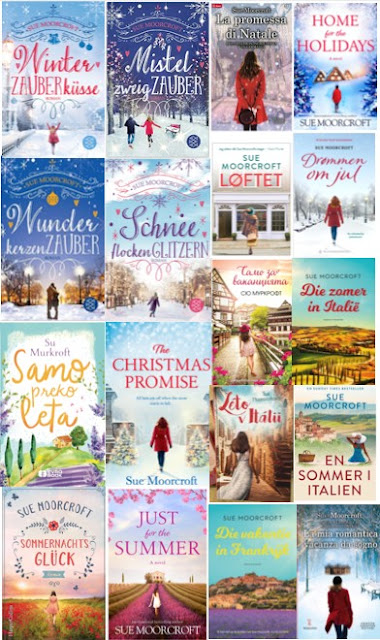 The ebook was going crazy. It went to number one on Kindle UK for five days in the run-up to Christmas 2016. I’d sold my first short story to a national newsstand magazine in 1996 so it had taken me twenty years to be an overnight success! It’s hard to describe the joy and euphoria, the sense of disbelief. I laughed and cried. Twitter went mad with big-hearted compliments from other authors, from my agent and editor jumping in with their own cries of joy. My book had outsold every other ebook on sale in the UK. I had to pinch myself.

I won’t take you through every other rung on the ladder because I have edits to do but the milestones continue. Just for the Holidays was nominated for a Romantic Novel Award. A new contract was offered and my editor stated her next goal as to make me a Sunday Times bestseller. I laughed out loud and said, ‘Well, good luck with that!’ The very next book, The Little Village Christmas, was a Sunday Times bestseller. The Christmas Promise was a bestseller in Germany. The rights team at Blake Friedmann sold my books into translation. Each book charted in the Top Fifty, if not the Top Twenty. Avon extended the scope of my contract to include Canada and the US. A Summer to Remember won the Goldsboro Books Contemporary Romantic Novel Award 2020 and One Summer in Italy scored me my first Top 100 position in the Amazon Kindle US chart. Research has taken me to France, Italy, Malta, Sweden and Switzerland.

It’s A LOT of hard work, not just from me but from everyone at Blake Friedmann and Avon, but it’s wonderful. I set out to earn my living from writing novels and I do. Summer on a Sunny Island is my eighth book with Avon and A Christmas Wish will come out later this year. A further two books are contracted.

Takeaways: work hard … and work with the right people.