Last week, Alison & I were lucky enough to revisit the excellent INXS concert film Live Baby Live at the cinema, when it showed ‘for one night only’. 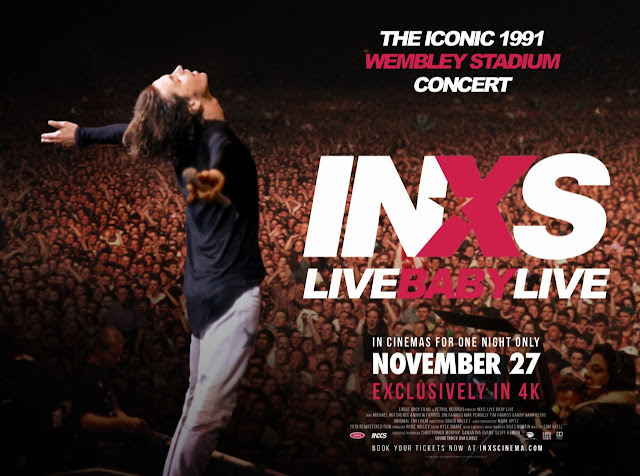 Live Baby Live is the film of the iconic 1991 Wembley Concert (the gig itself was called Summer XS and I wrote extensively about it here).  As Tim Peacock on udiscovermusic put it, “Six years to the day after Live Aid, London’s famous Wembley Stadium played host to a second concert [that] would go down in history. On 13 July 1991, Aussie superstars INXS delivered the show of their lives at Wembley, with their career-defining gig captured in all its widescreen glory by a spin-off concert film and live album – both of which were titled Live Baby Live.”
Having thoroughly enjoyed the concert - I became a firm fan of the band before we were halfway through the gig - I snapped up the album when it was released in November 1991.  David Mallet’s film version, shot with sixteen 35mm cameras (including one in a helicopter), was released the same day and I duly picked up the VHS, watching it over and over again.  When a special edition DVD was released in 2003, I bought that and Alison & I have watched it at least once a year since (it includes an excellent behind-the-scenes documentary, if you’re interested).  Both the VHS and DVD editions were cropped to 1.33:1 aspect ratio to fit the then TV standard 4:3 size (because, of course, back then TV screens were almost square) and I never thought anything about it. 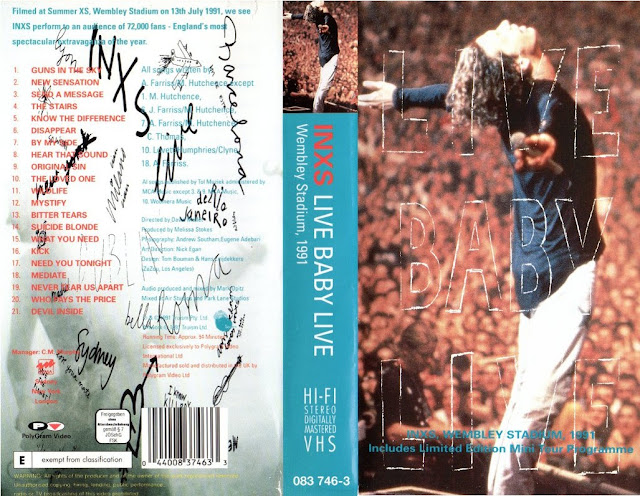 For the cinema release, Chris Murphy - the band’s long-time manager - spent a decade looking for the original 35mm elements, according to Andrew Trendell of the nme and managed to find most of it in Australia.

“When you’re working on a project for so long, there’s the fear ‘What’s everyone going to think?’ That turns into astonishment,” said Murphy. “Watching it back, Michael is better than even I thought he was - how he managed the stage. His voice became more powerful as the gig went along. It was extraordinary to watch - the crowd and band were as one.”

The concert has been fully restored from the original print with a new widescreen 4K Ultra HD version created in 1.78:1 ratio (which’ll fit nicely on 16:9 televisions!).  It also includes the full version of Lately - a previously unseen ‘lost’ track, included as an audio-only extra on the DVD - marking the first time the concert has been released with the full original setlist.

A brand new Dolby Atmos audio mix was prepared by Giles Martin and Sam Okell at Abbey Road Studios and released as a triple vinyl album (which sounds fantastic, I bought it the day it came out) and double CD. 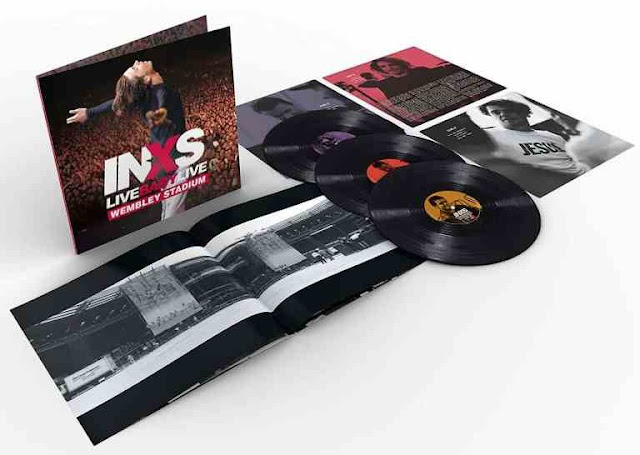 The UK showing was set for Wednesday 27th November.  We saw it at the Northampton Filmhouse and Alison & I turned up in our INXS t-shirts (I wore the one I got from Wembley back in 1991), having listened to the CD on the drive there.  From the opening, as the band rushes the stage to Jon Farriss’ drum beat to Michael Hutchence doing his victory salute at the end, the experience was incredible.  The film quality is superb, the image pin sharp for the stage scenes (not so clear for the helicopter shots), to the extent you can read the guitar plectrums easily and the widescreen presentation adds in a lot of detail.  The sound, also, was thunderous and that was just what it needed.
“The whole band was on fire that night”, writes Garry Gary Beers in the liner notes.  “Michael was so good, he sang his heart out and gave every person in the crowd a night to remember for all time. He truly had that amazing ability to make the biggest shows as intimate as the pubs we grew up in musically.”

“We were just six blokes from Australia that treated Wembley Stadium like just another pub gig,” Tim Farriss wrote in the liner notes.  “We went in with a PA and a few lights and played our asses off. No ego ramps, no back-up singers, no props, no grand pianos, just the six of us – and the audience went nuts! That’s all we needed!”

Music producer Giles Martin said of the gig that the crowd had just witnessed “one of the biggest global sensations at the height of their powers” and on the strength of this and my memories, he’s absolutely spot on.

This is a definite Blu ray purchase.  Thanks for the memory, INXS!