Pocketeers - A Bit Of Nostalgia...

Dude & I were talking the other day about electronic games, partly because he finds it so hard to believe we didn’t have them when I was a kid (apart from the Binatone system you plugged into the TV, which I wrote about here).  I reminded him of Pocketeers, which I’d introduced him to a few years back when I found one (I had the Grand Prix edition which, unfortunately, was long since lost to the sands of time), quite by chance, in my friend Joe's Vintage Toy Shop in Leicester.  Dude had been intrigued by it and, after I showed him how it worked, we spent an enjoyable evening playing on it.  Now, of course, it seems very primitive (though I still think it’s cool) but back in the day it was brilliant. 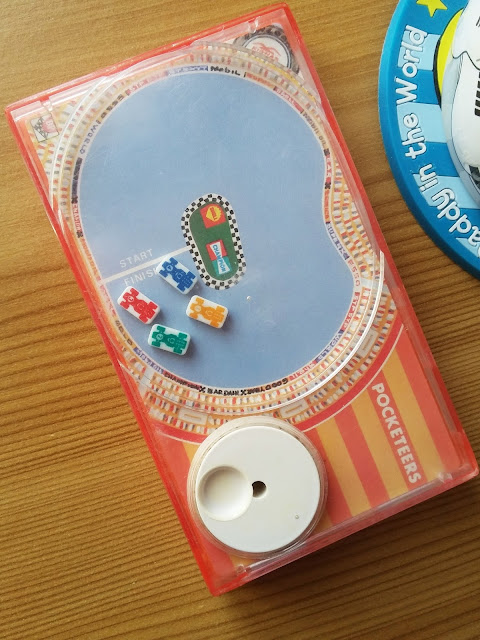 Grand Prix was originally released in the UK in 1976 and the gameplay is simple.  When the dial's rotated, it moves the four magnetic cars around the track, doing as many laps as you want them to (or until the colour car you’d chosen won).

Arguably the GameBoy of my generation, Pocketeers mechanical games were produced by Palitoy in the UK from 1975, based on the original Japanese Tomy Pocket Games.  Pocket-sized, cheap and encased in a sturdy plastic shell, they were often themed puzzles or challenges and ideally suited to while away hours spent in the back of the car going on holiday or for lazy summer afternoons.  The original eight titles released were Cup Final, Fruit Machine, Crossbow, Blow Pipe, The Derby, Grand Prix, Pinball and Golf, with more being added over the years - by 1982, when the line ceased production, there were 46 different games available.

They were sold in America, by Tomy, as Tomy Pocket Games and also as Pocketfuls, under licence to MB and Coleco.  Most had identical gameplay to the UK versions, though usually with different names, themes or graphics (the Grand Prix, for example, became Speedway and our cricket game was adapted to baseball).

Chatting about it made both of us want to play it again and, even though it might now be 43 years old, 100% manual and not a patch on Fortnite (his opinion, not mine), Grand Prix still gave us both a delightful hour or so of fun.
Thanks to James Masters
Posted by Mark West at 09:00:00