Star Wars mania was in full grip during 1978 and we fans at the time were so eager for anything associated with the film we grabbed it with both hands.  The Marvel comic (which I wrote about here) had already appeared, serialising the film in twelve black & white parts and Look-In (which I wrote about here) had done its best to keep the excitement going.

Then, in the summer, we got something else when Brown Watson released the first Star Wars annual. 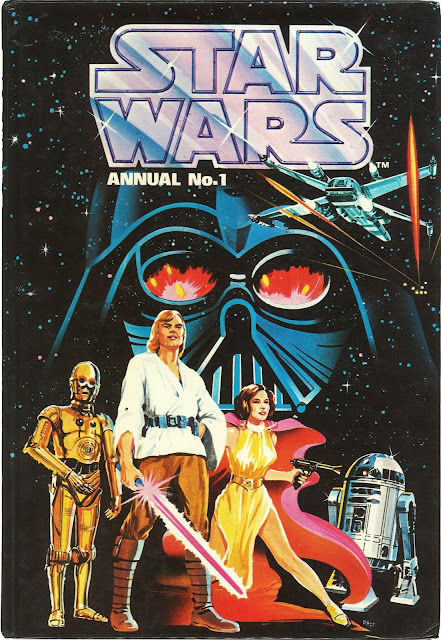 As I’ve written before (see here), annuals were a popular Christmas gift for kids of the 70s and most of them appeared over the Christmas period.  I imagine, at some meeting, that was the original plan for the Star Wars annual but the pop culture explosion and the demand for new product must have been overwhelming and so this edition appeared around May.  My parents bought it for me when we set off on holiday that year, driving halfway down the country to Widemouth Bay in Cornwall and whilst I only have vague, fleeting memories of the holiday - the beach and Tintagel, mostly, as well as the holiday camp where we stayed - I clearly recall sitting in the back of Dad’s Ford Escort and reading this.

The annual reprinted the comics adaption (though left out Biggs and friends on Tatooine, Jabba meeting Han and all of the garbage masher sequence) but the bulk of it - from Luke encountering the Tusken Raider right through to the first wave of the Death Star assault by the Rebels - is in glorious colour.  And the colouring (credited to Marie Severin) is wonderful - Ben Kenobi’s hovel has purple, orange, blue and red walls and the Death Star often has dark pink floors. 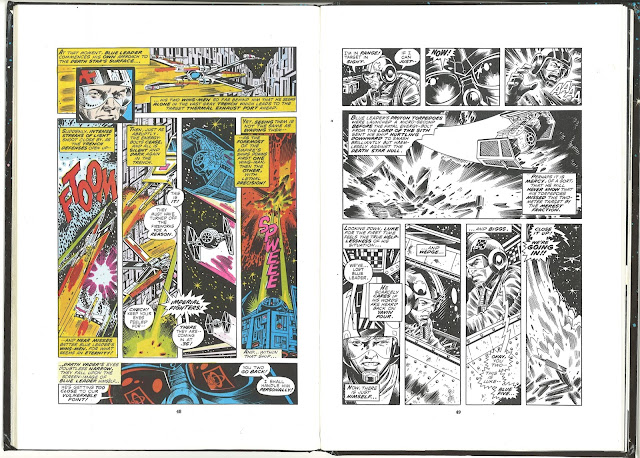 Even better than the adaption (which I'd already read, of course) - and perhaps the reason it was so truncated - were the behind the scenes articles, which I loved.

Another Time Another Space gives some background to the film and explains who the various characters are.  “Can our heroes triumph over such seemingly insuperable odds?  Do the good guys ever lose?  Read on… and may the force be with you!” 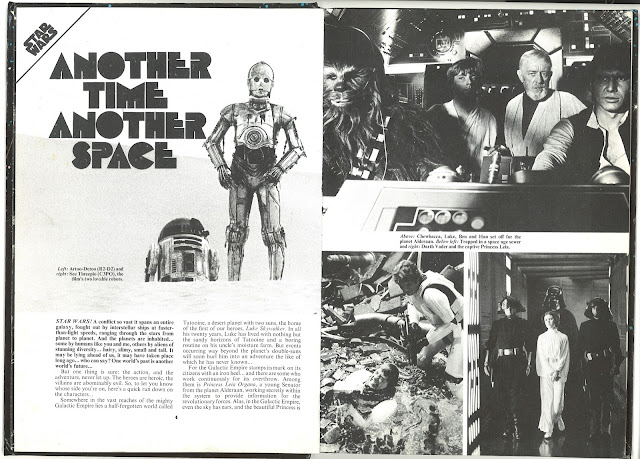 There are profiles of Alec Guinness, Mark Hamill, Carrie Fisher, Harrison Ford (who, I discovered, was older than my Dad!), Peter Cushing and ‘A Galaxy Of Co-Stars” (Kenny Baker, Anthony Daniels, David Prowse and Peter Mayhew).

Best of all, though, is Star Wars: The Evolution Of An Epic! which goes into a decent amount of detail (as much as it can over three pages) of the making of the film, from George Lucas’ path to starting the script, through the production, design process and the special effects.  Even read today - after the various Cinefex and Rinzler books - it still holds up well. 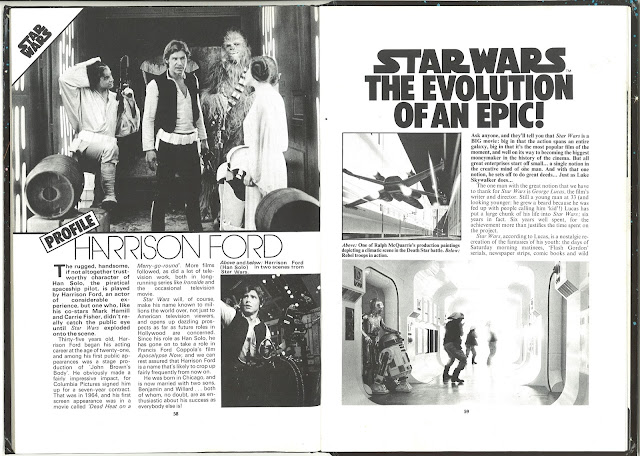 The annual cost £1.50 (you can probably still pick it up for that much from ebay today) and, to me, it was a solid investment especially since I used it to find new things I wanted to see (what was Night Gallery and 2001, how cool did Apocalypse Now sound, what on earth was American Graffiti and why didn’t I see Chewbacca in Sinbad & The Eye Of The Tiger?) and you can’t ask for more than that!


Sources:
My 1978 Star Wars Annual, by Brown Watson (all images scanned from this)
episodenothing
starwars.com