Naming The Bones, by Laura Mauro (a review)

In a new edition of the occasional series, I want to tell you about a book I've read and loved, which I think adds to the genre and that I think you'll enjoy if you're a fan.

I actually read this last year (and it featured highly in my Top 20) but realised I hadn't blogged about it and now, with voting open for the BFS Awards, I thought it was high time to do so... 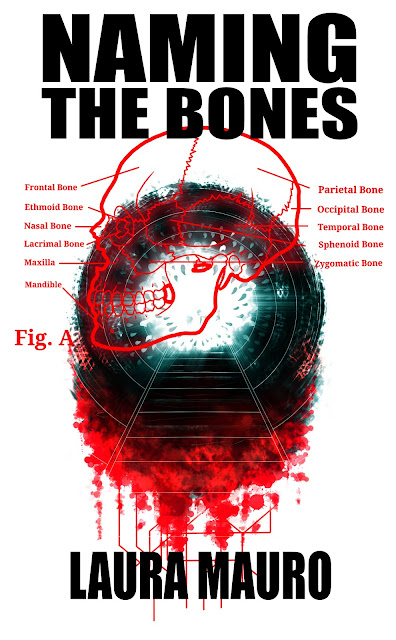 First there was darkness…

Alessa Spiteri survives a bombing incident on the London Underground only to discover that the horror she experienced there is only the beginning of the nightmare.

As she struggles to rebuild her life, she finds herself haunted by grotesque, shadowy creatures – monsters Alessa believes are hallucinations, born of her traumatised mind until she meets Casey, also the survivor of an Underground bombing, who tells her she can see the monsters too.

Together, the women plan their fightback against the creatures, a course of action which takes Alessa back into the tunnels beneath the city.
​
Back into the darkness.


Alessa Spiteri is a troubled woman in her late-20s, living in the Elephant & Castle in London and stumbling through life. When she’s injured in a bombing incident on the London Underground, she becomes haunted not only by the death and destruction she’s seen around her, but also the disappearance of a fellow commuter who helped her. He wandered off down the tunnel towards a light but nobody seems to know where he’s gone. And then Alessa begins to see things in the dark, shadows and shapes with eyes and long limbs and very sharp teeth.

Naming The Bones (a practise Alessa uses to calm herself) is a dark and complex novella that pulls you deep into the story - and the struggle that she faces - whilst slowly revealing the world around her. From Alessa’s out-of-her-depth counsellor to her well-meaning sister Shannon; from Tom to the support group she tries to join; life is constantly pushing against her and the things she sees in the dark seem like the last straw. Then she meets Casey, who knows all about the shapes - she calls them Shades - and who, it appears, has a link to them. As Alessa and Casey get further into their exploration, things apparently go from bad to worse until Alessa isn’t quite sure who she can trust.

I really enjoyed this. Filled with superb writing “she felt as though she was only barely a part of the world sometimes, existing on some strange margin inhabited by the anxious and the scared and the mad” and gripping set pieces (not least the explosion on the tube that opens the book), this is written at pace and doesn’t flag at all, nor does it shy away from painting Alessa as a flawed character who is doing her best to keep her head above water. The Elephant & Castle area is used well, with plenty of landmarks and street names to anchor the story in reality and the use of the Shades - and what they can do - is both frightening and well explored. The claustrophobic atmosphere of the tube - and, indeed, Central London - is well used and becomes genuinely oppressive as the story reaches its conclusion.

A fine addition to the Dark Minds Press novella line, this is original, full of tension and scary and I would highly recommend it.


to declare an interest, Laura & I share not only a publisher but our books (this and my collection Things We Leave Behind) were launched together at Edge-Lit 6 in Derby last July (you can read about the launch here).