As a visually stunning film, Star Wars lent itself readily to artwork interpretations so for the eleventh entry in my Star Wars At 40 thread, I thought I'd look at some of the posters that came out in 1977 and 1978 to promote the film.
Perhaps because it was one of the key UK release posters, this remains my favourite.  Tom Chantrell (1916-2001) was a British commerical artist who, according to the Guardian, helped "define the look of British film advertising."  He designed the posters for hundreds of films, starting with The Amazing Dr. Clitterhouse (1938) and working through to the 80s when original artwork for film posters fell out of fashion.  At the same time, his bread and butter work - exploitation films, Kung Fu movies, British sex comedies and Hammer horror - wasn't being released on the big screen and he moved successfully into designing video covers.
Drew Struzan (born in 1947) has since become synonymous with the Star Wars saga, but this was his first work for Lucasfilm.  Apparently, after finishing this, he realised he hadn't left enough space for the credits so, with no time to do it again, ripped the poster's edge and added extra paper to the sides.  He painted a new background, as if the poster had been hung on a wooden wall and added in Obi-Wan Kenobi for good measure.  It is said to be George Lucas' favourite poster and is now part of the Museum Of Modern Art's permanent collection.
This was the first theatrical release poster for Star Wars, created by Tom Jung who began his career with La Strada (1954) and worked on a wide variety of films through to the end of the 80s.  As well as drawing the back cover for the Star Wars original soundtrack, he created posters for The Empire Strikes Back and Return Of The Jedi and drew the covers for the novels Heir to the Empire, Dark Force Rising and The Last Command.
The Brothers Hildebrandt (twins Greg and Tim) were born in 1939, with Tim passing away in June 2006 due to complications of diabetes.  Collaboratively they worked as fantasy and science-fiction artists, producing illustrations for comic, children’s books, posters, novels, calendars and trading cards.  Perhaps best known for their Tolkien-inspired work in the 70s, Greg Hildebrandt believes it was this that led them to Star Wars.  “The reason they called us,” Greg said in interview, “is because Tim and I had just done the Lord of the Rings calendar, and we had a fan following."

Fast workers, they had just thirty-six hours to create their painting, based on Tom Jung’s theatrical one-sheet.  The resultant poster became a signature image of the 70s and was used widely on merchandise, as well as becoming the main theatrical poster in the UK, Spain and Turkey.
In an interview with Film On Paper (linked here), Tom Beauvais says, "The job came into the office and we all had a go at designing for it, but obviously Tom Chantrell’s version was eventually chosen. I used day-glo paper to really make the title of the film pop with bright colour. I started by putting ordinary yellow paint on the lightsaber but it looked too much like custard so I ended up using more day-glo on that to give it the right feel." 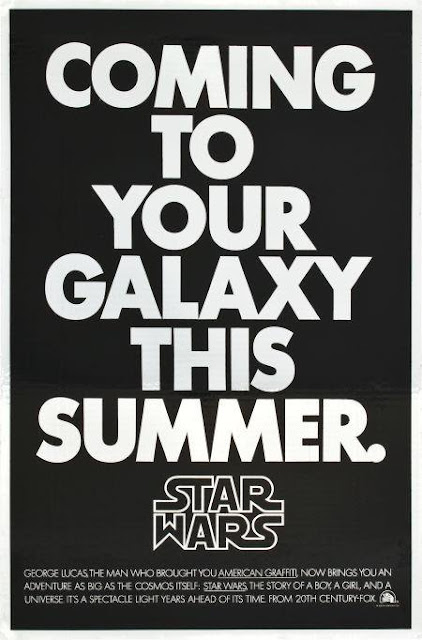 The famous pre-release poster (which is simple and very effective), selling the film on the success of American Graffiti. 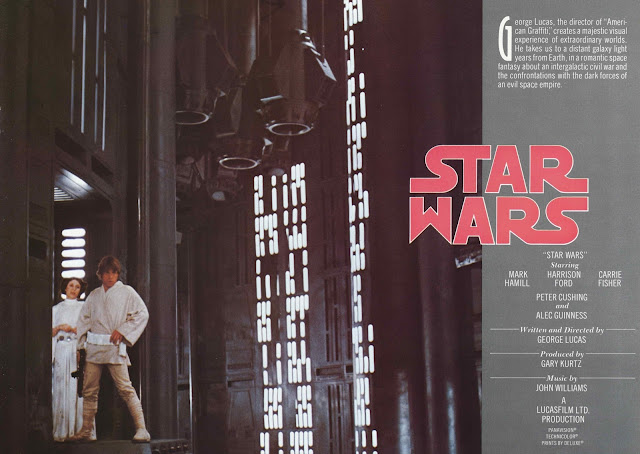 George Lucas was a fan of John Berkey and purchased some of his space artwork whilst working on his ideas for Star Wars.  One of Berkey’s illustrations - showing a ship diving from space towards a metallic world - is echoed by the Ralph McQuarrie painting of a Y-Wing descending on the Death Star.

Berkey (1932-2008) was known primarily as a sci-fi artist but, in his own words, “never cared much for science fiction”.  A legal dispute (between 20th Century Fox and Universal over links between Star Wars and Battlestar Galactica) made it impossible for him to work on the first film, but he did produce at least eleven pieces of artwork for it.  'The Battle Of Yavin' poster was included in the Star Wars double-vinyl soundtrack album and shows off a dogfight over the Death Star (and includes several Millennium Falcon’s).  The 1977 novelisation featured his group shot of Darth Vader, Luke Skywalker and Princess Leia.  During an interview in 2005, Berkey said he had “yet to see Star Wars.  I suppose I should see it one of these days.”
This was distributed at conventions and comic shops during 1976 to hype Star Wars to sci-fi fans.  Only 1,000 copies were apparently produced.

The great Ralph McQuarrie (who I wrote about at length here) also created several concept poster designs, all of which featured his original font. 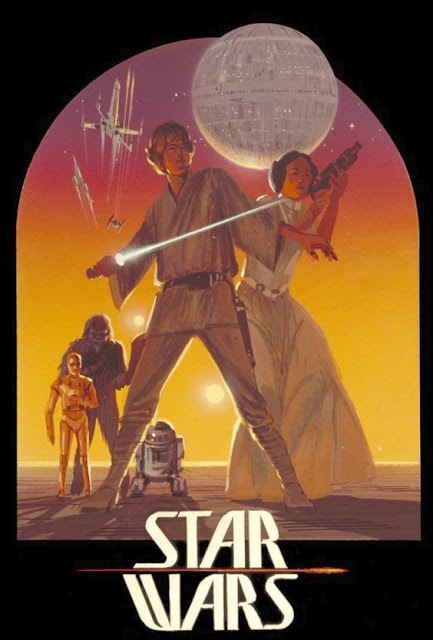 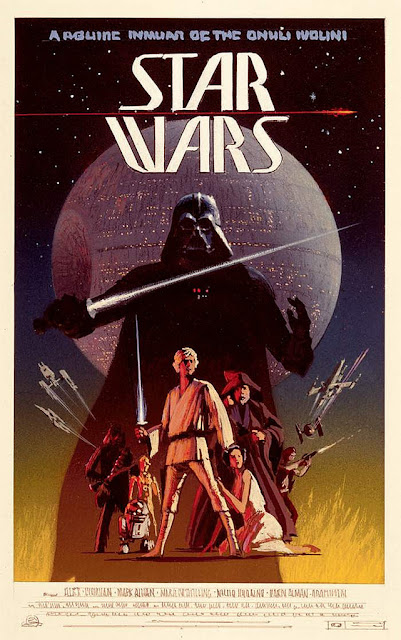 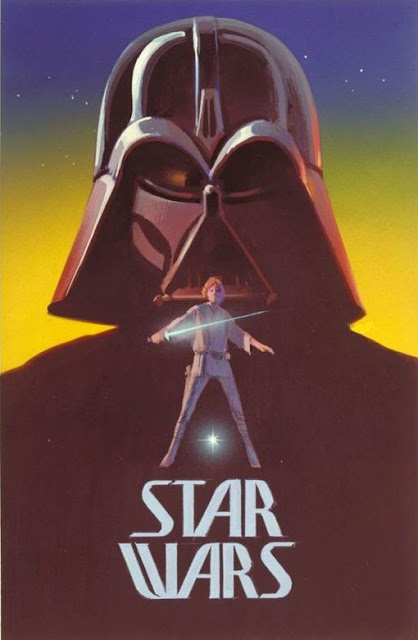